This article was published in 1975 Cincinnati Reds essays

As the Cincinnati Reds prepared for the 1975 season, they had reason for cautious optimism. The club had plenty of talented players, including some of the biggest stars in the game, and they had been a strong team for several years. But they had not won the World Series in 35 years; and the Los Angeles Dodgers were in their division and were the defending National League champions. 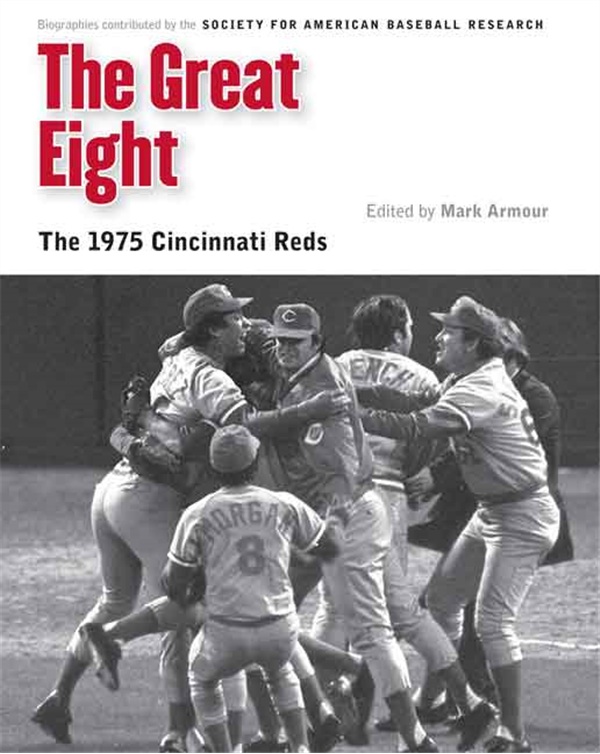 As the Cincinnati Reds prepared for the 1975 season, they had reason for cautious optimism. The club had plenty of talented players, including some of the biggest stars in the game, and they had been a strong team for several years. There were at least two reasons for the caution: The Reds, despite their great regular-season success, had been unable to finish the deal in the postseason—they had not won the World Series in 35 years; and the Los Angeles Dodgers, one of baseball’s stronger teams, were in their division (the NL West) and were the defending league champions.

The Reds had taken their big step forward in 1970, winning 102 games and reaching the World Series. That club developed some holes the very next year before being transformed after the 1971 season via a big trade with the Astros—bringing second baseman Joe Morgan, outfielder Cesar Geronimo, and pitcher Jack Billingham, among others, on board, and getting the team back on top. The 1972 club was led by five offensive stars: Morgan, MVP catcher Johnny Bench, first baseman Tony Perez, left fielder Pete Rose, and center fielder Bobby Tolan. The club had solid starting pitchers (Billingham, Ross Grimsley, Gary Nolan) and a great, flexible bullpen (led by Clay Carroll, Tom Hall, and Pedro Borbon). The club finished 95-59 in a strike-shortened season, winning the division by 10½ games before defeating the defending champion Pittsburgh Pirates in the NLCS. In the World Series they were heavy favorites against the upstart Oakland A’s, who had won 93 regular-season games and then lost their best player, Reggie Jackson, to a severe left leg hamstring injury in the deciding game of the ALCS. Instead, the A’s prevailed in a pitching-dominated World Series, scoring just 16 runs in seven games but winning four times—with each of their victories being by one run.

The 1973 club was largely unchanged, and rolled to a 99-63 record, the best in baseball. The Reds actually trailed the Dodgers by four games on August 30, but Los Angeles proceeded to lose nine consecutive games while the Reds began a 13-2 stretch. On September 16 the Reds were 6½ ahead, a stunning advance of 10½ games in 17 days. The Reds offense was marred by a terrible year from Tolan, who hit .206 and lost his starting outfield job, but was aided by the breakthrough of shortstop Dave Concepcion. Billingham (19 wins) and 22-year-old Don Gullett (18) led a deep pitching staff. The Reds were firing on all cylinders going into the NLCS, in which they faced the New York Mets, who had won just 82 games to barely capture the NL East, the worst first-place team in big-league history. Shockingly, the Reds were toppled three games to two, as for the second straight year they were shut down by a good pitching staff during a postseason series. The Reds hit .186 and scored just eight runs in the five game series.

In 1974 the Reds won their typical 98 games, the second highest total in baseball. This time, however, the Dodgers won 102 games and took the NL West, denying the Reds a postseason berth. The Reds were loaded with All-Stars having good seasons, but the Dodgers led wire-to-wire with their own collection of excellent players.

Heading into 1975, this latest Reds team appeared to be loaded again. Bench, still just 27, was the biggest star in the game, with two MVP awards, seven Gold Glove awards, and seven All-Star Games to his credit already. Perez at first base had averaged more than 103 RBIs per year over the previous eight seasons. Morgan had been electrifying in his three years with the club, hitting over .290 with surprising power, averaging more than 115 walks and 60 steals per year. At shortstop, Concepcion had hit over .280 the past two years, and had won his first Gold Glove in 1974. Left fielder Pete Rose, perhaps the most consistent star in baseball, had hit just .284 in 1974, his lowest in a decade, but still had set career highs with 106 walks and 45 doubles, and led the league in runs scored.

At the other three positions, manager Sparky Anderson had options. Cesar Geronimo was a tremendous defensive center fielder who would likely give way to George Foster against left-handed pitchers. The lightning-fast Ken Griffey was set to play right field, ably backed by Merv Rettenmund and Dan Driessen. Third base, a trouble spot the past couple of years, would be manned by the slick-fielding but weak-hitting John Vukovich, acquired in the offseason from the Milwaukee Brewers.

The Reds’ pitchers were often criticized for not carrying their weight, but this view was largely unfair. It was the offense, after all, that had failed in the 1972 and 1973 postseasons, and, looking ahead, Anderson seemed to have another deep and flexible staff. Billingham had won 19 games each of the previous two seasons, while Gullett, still just 24 years old, had won 18 and 17. Fred Norman, acquired in the middle of the 1973 season, and Clay Kirby, picked up before the 1974 season, were dependable third and fourth starters. For his remaining starter Anderson was hoping for a comeback from the 27-year old Gary Nolan, who had been 15-5 with a 1.99 ERA before getting hurt late in the 1972 season, and had pitched in just two games in the past two seasons. The return of Nolan would give Anderson one of the best rotations in the game.

One of the reasons Anderson’s starters remained under the radar was that he was quick to use his bullpen, a trait for which he earned the nickname Captain Hook. The Reds had finished third in the league in ERA in 1974 but Anderson used a five-man rotation and gave a lot of innings to his top relievers. Over the previous three years Pedro Borbon had averaged 10 wins, 127 innings, and a 2.87 ERA. Clay Carroll finished 12-5 with a 2.16 ERA over 100 innings in 1974, and he had been anchoring the Reds’ bullpen for seven years. Anderson also had Tom Hall and rookies Pat Darcy and Will McEnaney to hand the ball to, which he would certainly be doing.

None of the other four teams in the NL West (Atlanta Braves, San Francisco Giants, San Diego Padres, and Houston Astros) was expected to keep up with the Dodgers and Reds. In Street and Smith’s Official Yearbook, among the more respected baseball annuals of the day, Ross Newhan picked the Dodgers to repeat, citing the Reds’ age and the previous year’s failure, which was sure to weigh on the team.1 Zander Hollander’s The Complete Handbook of Baseball agreed,2 as did the annual Major League Baseball 1975.3 The Churchill Downs Sports Book in Las Vegas listed the Dodgers as 4-5 favorites to win the division.

But not everyone was ready to bury the Big Red Machine. “The Reds have devastating bats up and down their lineup,” wrote The Sporting News, “and their pitching will be better than adequate, especially if Gary Nolan succeeds in his comeback from shoulder trouble.”4 The Dodgers had their own comebacking hurler, Tommy John (recovering from his famous surgery), who did not appear to be ready.

“Everybody is picking the Dodgers to repeat,” opined Roy Blount, Jr. in Sports Illustrated, “but everybody may be wrong. The Reds look better.”5 The Reds season would begin on April 7, and seven of their first ten games would be against the Los Angeles Dodgers.

MARK ARMOUR is the founder and director of SABR’s Baseball Biography Project, and the author or editor of five books on baseball, including “Joe Cronin—A Life in Baseball” (University of Nebraska Press, 2010). He lives in Oregon’s Willamette Valley with Jane, Maya, and Drew.