This article was written by Ed Goldstein

This article was published in the 1989 Baseball Research Journal

Baseball teams didn’t slug 200 homers in a single season until 1947; they’ve been doing it pretty regularly ever since. But does all that power guarantee a title?

FEW ASPECTS OF BASEBALL capture the imagination as forcefully as the home run. The pages in record books devoted to home-run hitting outnumber those of any other hit many times over. While the number 50 signifies the single-season slugger par excellence, the team that reaches 200 home runs is equally distinguished.

Nineteen-eighty-seven marked a watershed year in home-run hitting. Both leagues, arguably aided by a hyperthyroid baseball, and/or internally altered hats, shattered league home-run records. For the first time no fewer than five teams hit over 200 home runs apiece, and six others smashed 190 or more. This new extreme in team prowess begs an inquiry on teams that have accomplished this feat – who they were, how they did it and how significant the accomplishment was.

All teams that have hit 200 or more home runs are listed in the accompanying table, with the pennant winner of that season if different. All date from the post-World War II era, starting with the 1947 Giants.

Considering that 182 homers was the team record before 1947, it is astonishing that that year’s Giants belted almost 40 more, upping the record to 221. In the next decade they were joined by three other National League clubs, the 1953 and 1955 Dodgers and the 1956 Reds, the latter of which tied the Giants’ record of 221.

To sum up, the Giants and Tigers have performed the feat three times each, while the Dodgers, Twins, Braves, Red Sox, Brewers, and Orioles appear on the list twice. The Yankees, Reds, Cubs and Blue Jays did it once each.

While the thought of a 200-homer team conjures up visions of an entire roster bulging with sluggers, the fact is that the hulk of the slugging is done by a select few. On no club did the top three home-run hitters account for less than 38.5 percent of the club’s production, ranging to a high of 60.1 percent. The average percent of homers hit by the top three sluggers on all 200 home runs clubs is 49.7. We also see that most of these clubs were accompanied by at least one hitter who produced 20 or more homers in addition, further concentrating the power. On the record-holding 1961 Yankees, Berra’s 22 homers and Howard and Blanchard’s 21 apiece mean that 207 of the 240 homers were produced by six men, 86.2 percent of the total, and the sixteenth best team total of all time from just those six.

Most 200-homer teams consistently field the same lineup. And most of these clubs repeat the accomplishment, though not necessarily in the short span of time that the Tigers and Giants did. While you must have the personnel to do the job, it would seem that having a park conducive to slugging doesn’t hurt. However, home and road figures belie that assumption. Six of the twenty-two 200-homer teams hit more road than home four-baggers, and in most of the other cases the differential between home and road totals is around 20. As we get further into the era of the all-purpose stadium, the ability to tailor a lineup to a ballpark will become more difficult to achieve. It would appear that even when this was possible, loading up for your home field didn’t produce that many more home runs.

There are those who would mark the expansion era as the beginning of the decline in the science of pitching, or at least as the age when the percentage of competent hurlers in the major leagues dropped steadily. Whether this is true or not, it is undeniable that eighteen of the twenty-two 200-homer performances came in the post-expansion era. Expansion also brought with it a longer schedule, as Ford Frick was quick to remind Roger Mans and the world in 1961. Considering a 200-homer team produces at a pace of about 1.25 homers a game in a 162-game schedule, we can assume that any team hitting fewer than 209 homers in that span would not have hit 200 homers in the old 154-game scheme. Seven of the eighteen post-expansion teams fall into this category.

While the year 1947 is significant for this study as the first appearance of a 200-homer team, it is better known as the year that baseball’s racial barriers were dropped. Could the emergence of the black and Hispanic major leaguer have played a part in the growth of team home-run production? As we have noted, the ability to achieve 200 home runs in a season depends to a great extent upon the production of the three or four top home-run producers on the club. Of the sixty-six individuals we find in the table as top producers for 200-homer clubs, twenty-five are either black or Hispanic, a total of almost 38 percent. This figure is disproportionate to the general population, and would seem to indicate a definite contribution by these groups.

Almost all baseball fans, even those who swear that the 1-0 pitcher’s duel is the greatest spectacle in sports, are turned on by powerful offense. Take many of the greatest games in baseball history, and they’ll turn on a famous home run hit at a crucial moment. Logic dictates, therefore, that the team crushing 200 or more homers in a season must have extraordinary success.

The facts speak otherwise. Of the twenty-two teams that have hit 200 or more home runs in a season to date, only seven won their league or division. Of these, only two went on to be world champions.

Of the fifteen non-champions, one finished last, two next to last, and only two second. Why doesn’t enormous home-run production correlate with victory?

In two notable cases, the answer is one-dimensional ballclubs. The 1947 Giants and 1973 Braves, knowing they had little else to offer, purposely stocked their teams with sluggers to create excitement amid the losses. In most cases, however, the clubs that hit 200 home runs, expecting to succeed in this fashion, simply were not able to keep up with a somewhat less powerful club that outpitched them. In every case, when the 200-homer team did not win the pennant, the team that did had an earned run average lower not only than that of the 200 home-run team, but of the league average as well. Only the 1987 Blue Jays had an ERA lower than that of the pennant winner.

Only the 1947 Dodgers and 1987 Cardinals were relatively weak in this department – the latter outscoring both 200-homer National League teams that year with half the power, and a third of that coming from just one player.

Considerations of performance aside, major league baseball remains a business, and the bottom line for any general manager is money passing through the ticket windows. Does hitting 200 home runs bring more people to the ballpark? Fifteen of the twenty-two 200-homer teams saw attendance rises of 13,000 to more than 1,000,000 fans. Most of these clubs were either pennant winners, in the race, or improving their position in the standings. The 1963-4 Twins saw their attendance drop both seasons, a total of almost a quarter million in two years, as they fell further back from the pennant winners.

The 1970 Red Sox, well behind the rampaging Orioles of that year, lost 240,000 in attendance in a single year. The lesson to general managers is that the fans will pay for visceral thrills for just so long. Over a long schedule, a team has to win to draw crowds.

Finally, it would be remiss to leave this subject without a tip of the cap to the only two 200-homer teams outscored by their opponents — the 1987 Cubs and Orioles. Their performances prove that it don’t mean a thing if all you can do is swing. 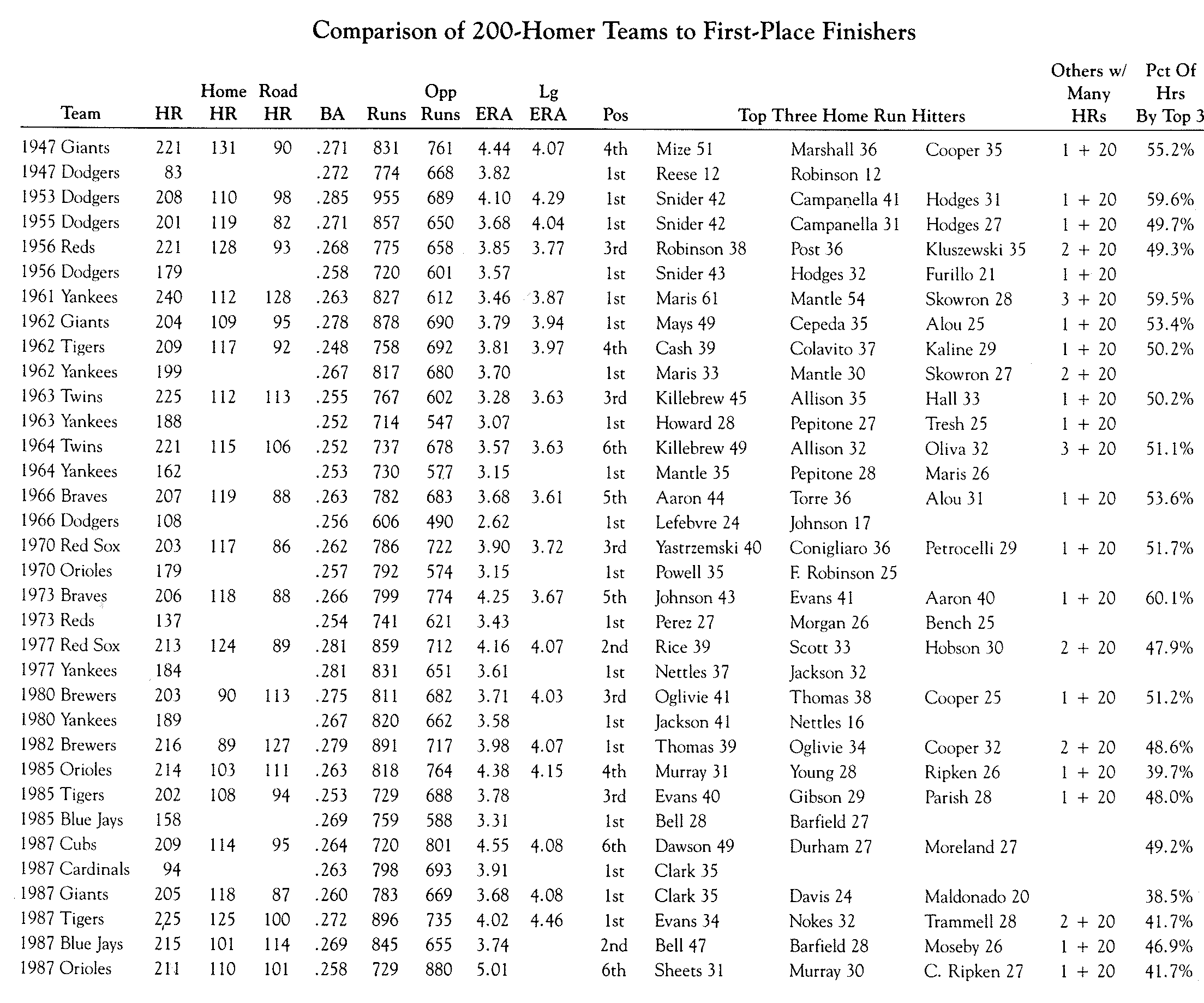