This article was written by Milton P. Eisner

Baseball fans know that games behind (GB), the number that appears in the last column of each     day’s standings, is not always an accurate measure of the distance between two teams. GB is the average of the number of games a team trails the percentage leader in the win column and the number of games that team trails the leader in the loss column. To illustrate, consider the major league standings at the All-Star break in 1985: 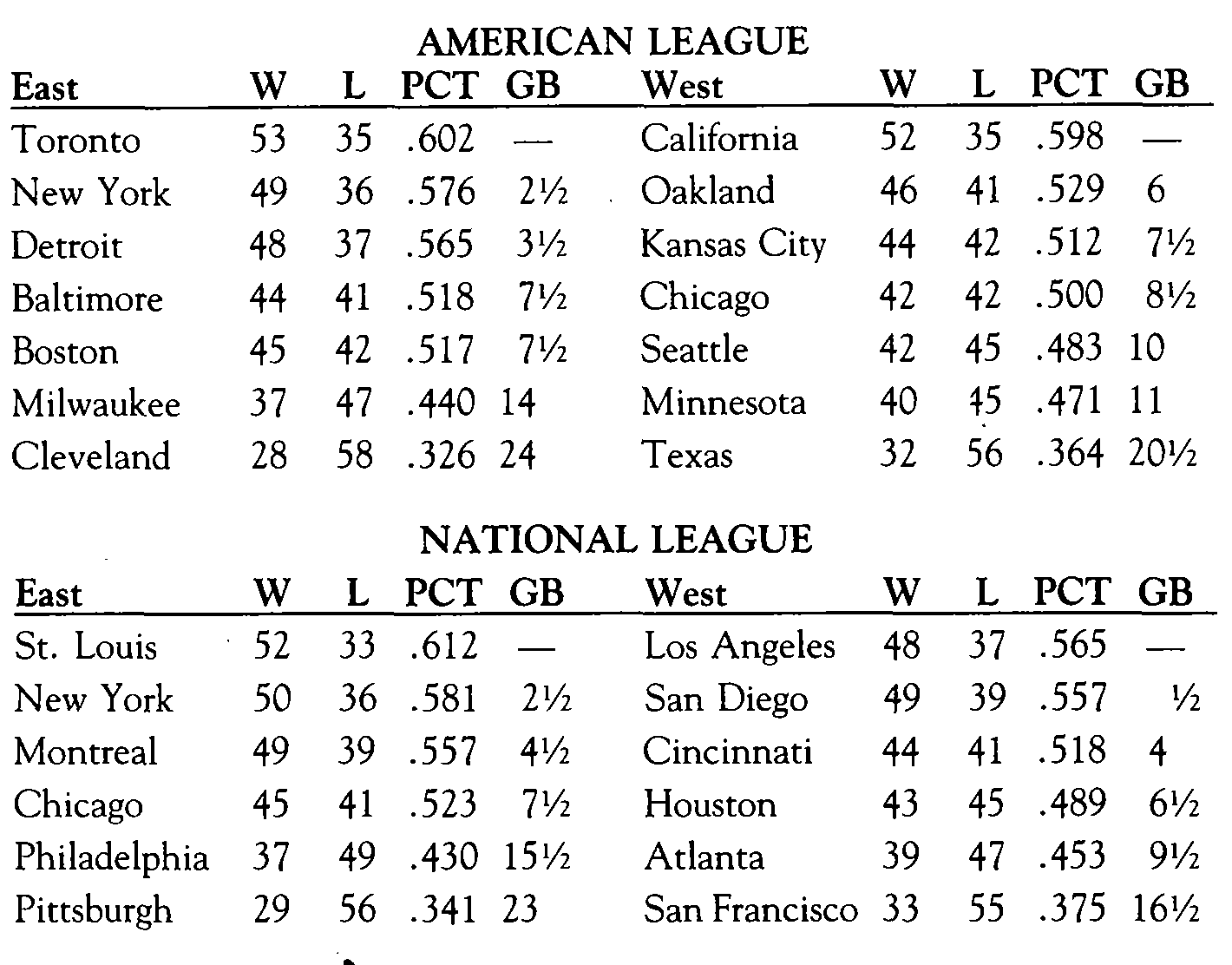 In the National League East, New York trailed St. Louis by 2 in the win column and 3 in the loss column, so the Mets were 2½ games behind the Cardinals. In the West, San Diego, although trailing in percentage, was actually one win ahead of Los Angeles (so the Padres “trailed” by – 1) while trailing by 2 in the loss column, which meant San Diego was ½ game behind Los Angeles because ½ is the average of – 1 and 2.

There are two problems with using GB as a measure of the distance between the trailing team and the leader. The first is illustrated by the following hypothetical standing. You’ll note the Trailers “trail” by -4 in the win column and by 3 in the loss column. Thus the Trailers are – ½ game “behind” the Leaders – that is, the Trailers are ½ game ahead of the Leaders, even though they have a lower percentage. Here’s the standing:

The second problem is reflected in the fact that baseball players and the media always qualify their assessment of games behind with a reference to the “all-important loss column.” For example, in the 1985 standings that we looked at, both New York teams were 2½ games behind, but were they really the same distance from their respective leaders? Most fans would say that the Yankees were closer to the Blue Jays than the Mets were to the Cardinals because the Yankees were only one behind in the loss column while the Mets were three behind in the loss column. If the Blue Jays lost one more game, the Yankees would have been able to achieve at least a tie for first place by winning all their “remaining” games; in baseball’s cliche, they would “control their own destiny.” By contrast, the Mets would not have been in such a position unless the Cardinals lost three games.

There is a different way of calculating the distance between teams that avoids both of these problems. Let’s call it the deficit between the teams in order to avoid confusion with games behind. By definition, the deficit between two teams is a number D such that if the trailing team won D games and the leading team lost D games, they would have the same winning percentage.

Let’s calculate D for each second-place team in the standings listed earlier in this article. The easiest calculation is for Oakland. If Oakland won D more games and California lost D more, the standings would read:

It’s obvious the solution is D = 6 because both teams would then have records of 52-4 1. Thus, deficit and games behind are equal when the teams have played the same number of games.

The other divisions are more complicated. In the

American League East, if the Yankees’ deficit is D, then the Blue Jays and Yankees would be tied if the standings were:

Thus, D is the solution to the equation

Solving by cross-multiplication we get

Don’t worry if you don’t know it; we’ll give a practical algorithm for calculating D later.) The solution, rounded to two decimal places, is D = 2.24. Thus the deficit between the Yankees and the Blue Jays was 2.24 games. This confirms our intuition that the Yankees were actually less than 2½ games behind because they were only 1 behind in the loss column. Note that if such a thing were possible and the Yankees won 2.24 more games and the Blue Jays lost 2.24 more games, the standings would read:

So the teams would be tied. (The tie is not exact because we rounded D to two decimal places.)

By the quadratic formula, D = 2.59. So it’s true that the Mets were really more than 2½ games behind the Cardinals.

So by the quadratic formula, D = 0.68. Thus the Padres were really more than ½ game behind the Dodgers, which is what we expected because they trailed by 2 in the loss column.

Here is the formula for calculating D:

It’s obvious that D is more difficult to calculate than GB, but it still takes only a few seconds on a calculator. It would be simple to write a computer program that would calculate percentages and deficits on the basis of given won-lost records. Thus, we need not, in the present high-tech age, sacrifice the precision of D for the computational simplicity of GB. Here are the major league standings at the All-Star break of the 1985 season as they would look with deficit in place of games behind: 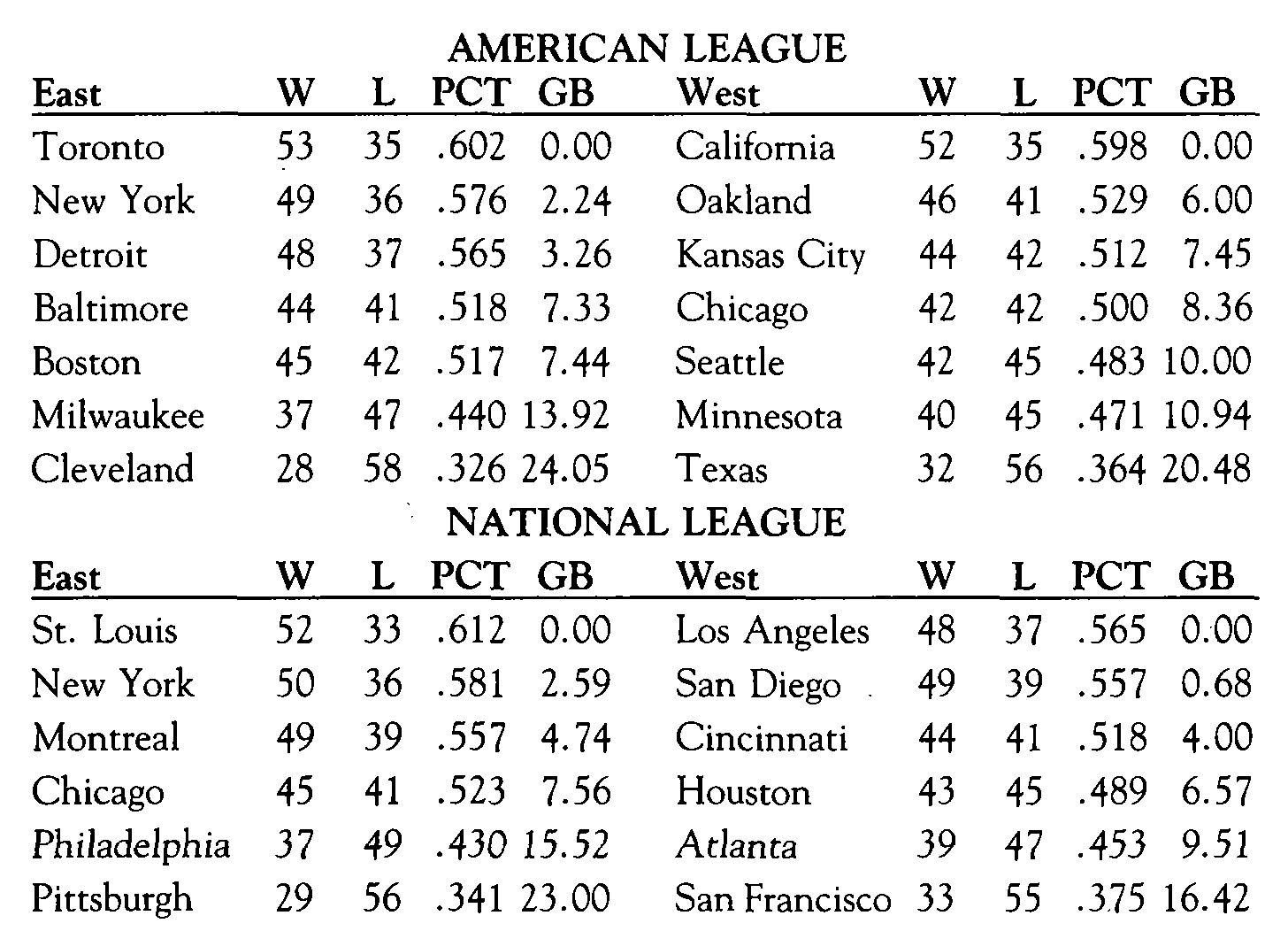 One more important fact about deficit: The anomalous situation described earlier, in which a team trailing in percentage is actually ahead of the leader in terms of games behind, cannot occur. We’ll leave it as an exercise for the reader to calculate the deficit between the Trailers and the Leaders.