This article was written by William D. Rubinstein

Many of us who read Richard D. Cramer’s article “Average Batting Skill Through Major League History” in BRJ 1980 (pp. 167-72) regard it as one of the most important, impressive, and fascinating articles which SABR has ever published. Its implications — which are not spelled out by Mr. Cramer — are so amazing that they require a special discussion.

Because — for the first time, so far as I know — Mr. Cramer’s statistics allow us to truly compare hitters of different eras, what he has given us is a time machine which can actually answer such old and seemingly unanswerable questions as “What would Cobb have hit if he were around now?” “Who was better, Hornsby and Sisler or Rose and Carew”? or “Are those unbelievable averages of baseball’s distant past, like Hugh Duffy’s .438 in 1894, really meaningful?” Mr. Cramer has also compiled similar statistics on slugging averages, allowing us to see, again, whether Babe Ruth, Lou Gehrig, or Ted Williams would still have outslugged Mike Schmidt, Willie Stargell, or Reggie Jackson, if one could take the 27-year-old Ruth or Gehrig and put him into today’s big league situation. Whether Mr. Cramer’s findings are accurate or not (something we will discuss below), he deserves credit for seemingly answering the unanswerable in an original and scientific way.

What Mr. Cramer does not spell out in his article, however, and what will be presented here, are some of the precise implications of his findings. These are so astonishing that many SABR members will simply not believe them. In the three tables below I have detailed the following information: the “real” lifetime batting averages (in terms of 1976 NL play, the standard used by Cramer) of nearly 50 of the top batting stars of past and present; secondly, the top “real” single season batting averages, by era, since 1876, again in terms of 1976 NL play; and, thirdly, the top “real” single season slugging averages between 1920 and 1979, in the same terms.

Compiling the lifetime BA information is somewhat complicated, since eacl1 single season BA has to be weighed into the total by proportion of lifetime ABs. Nevertheless, its findings are remarkable in the extreme. Given that average batting skill rose by 120 points between 1876 and 1979, one would naturally expect today’s lifetime BAs to rise, but these calculations reveal that if Ty Cobb’s career had taken place under the conditions of the NL in 1976, his lifetime BA would have been only .289. Rogers Hornsby and Joe DiMaggio achieve identical .280 marks. Bill Terry, Lou Gehrig, and Tris Speaker are average-to-mediocre hitters at .271, .269, and .265 respectively. The Babe’s .262 is a disappointment, though he hits better than Al Simmons (.260) or Harry Heilmann (.257). If he had been playing today, Honus Wagner would certainly wear a “good field — no hit” (lifetime .251) label! And as for the likes of Pete Browning (.248), Dan Brouthers (.238), or Billy Hamilton (.236) — it looks like Salt Lake City for them!

On the other hand, today’s players, even those who are not true superstars, appear to be veritable supermen in comparison. Tony Perez outbats Hornsby and DiMaggio by three points; Al Oliver (through 1979) outhits Ty Cobb by thirteen. Rod Carew (.341 through 1979), George Brett, Bill Madlock, and others among today’s top hitters easily outhit those of yesterday by many points. Only Stan Musial (.315), Roberto Clemente (.313), and Ted Williams (.310) among recent stars of the past do really well.

Some “Real” Lifetime Batting Averages, Through 1979

The problem with these statistics is that no one will believe them. I doubt if a single member of SABR can be persuaded by any amount of statistics that Tony Perez is a better hitter than Rogers Hornsby or Joe DiMaggio, or that Al Oliver is capable of outhitting Ty Cobb by 13 points or Honus Wagner by over 50 points. Certainly the Baseball Writers, who in 1969 voted Joe DiMaggio the greatest living player over anyone active more recently, do not accept this verdict. The statistics raise many questions which will be discussed below. Before doing this, the other tables presented here should be considered.

The top “real” single season BAs further shows that upward rise in batting averages since the 19th century. The top “real” batting average of the 1876-1919 period, Tris Speaker’s .327 in 1916, was far below the 15th highest BA of the period 1963-80. Ty Cobb still dominates the list of early hitters, but with averages which would be considered only good — excellent, rather than unbelievable, by today’s standards. Only one 19th century batting average makes the list at all, while the incredible averages of the era, like Hugh Duffy’s .438 in 1894, can be deflated into much lower figures — in Duffy’s case, to an average of only .293 in 1976 terms. It will also be seen that “true” .300+ averages were of the most extreme rarity, about one every other season in the early period.

During the “golden age” of baseball, 1920-42, top averages rose, but they are still lower than those of today. Ted Williams’ “real” .364 in 1941 outscores everyone else by a wide margin, with Hornsby’s “real” .338 in second place. It is interesting to note that no single hitter dominates the list, while many of the highest averages and best hitters of the period do not appear at all — like the top marks of Harry Heilmann, Bill Terry, and George Sisler. After the War, averages rose again, with Williams and Stan Musial in leading places. Joe Cunningham’s .345 in 1959 — which translates into a “real” average of .336 turns out to be one of the highest in history, higher than any “real” average ever achieved by Ty Cobb! In the contemporary period, averages rise again by a large amount, with Rod Carew the predominant figure — although George Brett may eventually equal his impact. Carew (three times) and Brett (once) hit for averages higher than anything ever seen in baseball history. 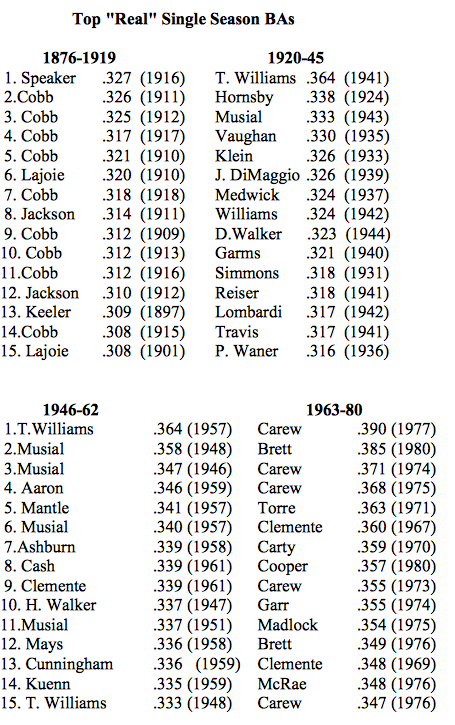 Turning to “real” top single season SAs achieved during the lively ball era, it will be seen that these “deflate” to a much more limited extent than BAs. Babe Ruth is still the dominant figure, with top SAs superior to anything seen since. Top “real” SAs have declined rather than risen since the War, as of course they have if one takes the record book figures at face value. This indicates that if Babe Ruth were active now, he would probably hit about as many homers as he actually did. In 1976 terms, his “real” 1927 figures — a .272 BA, with a .698 SA — indicate that he probably would still have hit 5 5-60 home runs, but with many fewer singles and doubles. 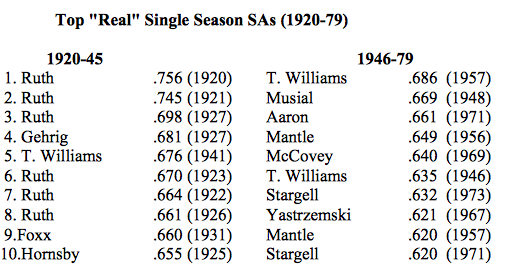 Mr. Cramer’s approach is very interesting, but I think there are very few SABR members who can accept its conclusions on face value. In the first place — as another SABR member, Dallas Adams, has pointed out to me — the table of “corrections” Cramer has compiled (pp. 170-1) apply to an entire league in a particular season, not to a particular player. And while one might well have to subtract 101 points from the BA of a mediocre AL hitter in 1921 to arrive at his 1976 BA, is this really also true of the Ty Cobbs and George Sislers? Evidence that it is not so seems implied in the well-documented fact that the gap between the average league BA and the league-leading BA has been consistently narrowing throughout the century: in 1911, for instance, Cobb’s batting average exceeded the AL league BA by 137 points, but most recent batting champs have exceeded their league BA by only 60-70 points. It thus seems that the very best hitters of the past were very much better than the average hitters of their day. Because of this, I doubt that the “corrections” provided by Cramer can be applied to all players of the past: they almost certainly cannot be applied to the very best players of former ages.

How, then, would Ty Cobb do if he were young and active today? Based upon everything we know about his ability, incredible drive, speed, and willingness to learn, my guess is that if he were retiring next year, he would be carrying a .320-.325 lifetime BA with him. He would not hit for a lifetime .367 — because of better fielding and pitching, modern ballparks, and jetlag, no one could under today’s conditions — but he would still be among the very top active hitters, probably below Carew but above Rose and everyone else among today’s senior stars, and far above the paltry .289 lifetime average suggested by the statistics.

Cobb and the other great hitters of the past would, I suspect, quickly have adapted themselves to modem conditions and stood out as stars. The same probably holds true among all sports. The world record miler of 1920 — who could run the mile in 4:15 or so — would not, if he could be brought forward in time and put into today’s athletic world — run the mile in 4: 15, if he could train under today’s conditions. He might not run the mile in 3:49 (today’s record), but I would be willing to bet that he would take 15-20 seconds off his best time in less than a year.

Where Mr. Cramer is right, I also suspect, is (a) for the distant past and (b) among mediocre and average players of the past. It is, indeed, very difficult to believe that the physically very small players of the 19th century could stand out in today’s conditions. Great players like Hugh Duffy (5’7″/169 lbs) or Willie Keeler (5’4½”/140 lbs) were probably just too small to star under today’s conditions, although (like today’s small players) they might compensate for their size disadvantage in other ways. And yesterday’s average ball players were probably far inferior to today’s average ball player, although the peaks may be very similar.

RESPONSE TO COMMENTARY
By Richard Cramer

Regarding the Batting Skill commentary by Dr. Rubinstein, I agree completely. Cobb probably would have a batting average higher than .289 if he were retiring today. However, I also think he would have a slugging percentage worse than the .465 that the tables by themselves suggest. To illustrate this point with an example, Cobb’s 1911 heroics, when transformed as in the 1908 Wagner example, yield 193 hits (.328 BA), and 47 doubles, 23 triples, and 12 homers (.548 SPct); I agree that his actual BA would be higher, but I also suspect that his extra-base hits would be fewer. What the tables are supposed to mean is that Cobb’s “team batting value” to a 1979 team would be that of a .328 hitter with 47 doubles, 23 triples, 12 homers, and leading the league in stolen bases. Definitely a 1979 all-star, but possibly not what a young Cobb’s stats “should be” in 1979.

To get more singles and fewer extra-base hits while retaining the same “team batting value,” the following rough approximation to the relative values of hits may be useful: Converting an out to a single improves team run-scoring by as much as