Winning a baseball championship is a challenging endeavor. Winning a single championship at the highest classification in the minor leagues (Triple-A)—with the added complexity of countless player transactions and few multiyear players as a stabilizing force—can be even more challenging. Winning back-to-back championships at Triple-A—while switching leagues because the first league folded—is an even more difficult achievement.

Buffalo won the East Division during the following season by four games over the Indianapolis Indians, but were swept by the Oklahoma City 89ers four games to zero in the finals. In 1995, the Bisons returned to the Championship Finals, but lost the deciding fifth game to the Louisville Red- birds. In 1996, the Bisons won the East division by six games, but lost the first-round series to second-place Indianapolis three games to two. 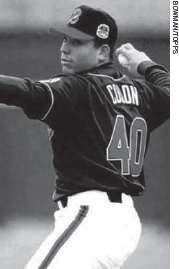 Bartolo Colon was a member of the 1997 championship Bisons and pitched a no-hitter on June 20 in North AmeriCare Park. (Bowman/Topps photo)

The ballclub had high hopes for a successful 1997 season, especially considering the continued success of the parent Cleveland Indians. Several players contributing at the major-league level had recently had productive stops at Triple-A Buffalo, including Brian Giles, Albie Lopez, and Jeromy Burnitz, and the major league pipeline was flowing well.

Buffalo started the season in exciting fashion, defeating the Nashville Sounds in extra innings and drawing the largest Opening Day attendance across the minor leagues (19,576).1 After Opening Day the Bisons floundered, compiling a 10-10 April record. Their 16-11 May record moved them into second place, only three and a half games out of first place after a 14-inning win over Louisville.

On June 20, Bartolo Colon made Bisons history when he became the first pitcher to throw a nine-inning no-hitter in North AmeriCare Park. Colon no-hit the New Orleans Zephyrs during Buffalo’s 4-0 win. He walked the second batter he faced, who was subsequently thrown out attempting to steal second base, then retired the next 25 consecutive batters. In his first start after a demotion from Cleveland, Colon struck out eight Zephyrs, with the outfielders recording only three fly outs.

That same evening, the Bisons celebrated their 10-millionth fan to attend a Buffalo Bisons ballgame at North AmeriCare Park (formerly known as Pilot Field and the Downtown Ballpark) since its 1988 opening.3 As July arrived, a seven-game winning streak moved the Bisons into first place over Indianapolis, where they remained for the rest of the season.

In the Eastern Division playoff series, the Bisons defeated the Indianapolis Indians, three games to two, with the deciding game highlighted by a five-run fourth inning sparked by a Hubbard three-run triple.4 In the Championship Series, Buffalo finally savored a championship by defeating the Iowa Cubs in three straight games. The final game was filled with dramatics as the Cubs tied the game with two ninth-inning runs. A caught stealing sent the game into extra innings. Sean Casey, who had joined the club less than a month earlier, hit a tenth-inning solo home run to give Buffalo the lead, and David Weathers pitched the final two innings to earn the series-clinching victory.5 Torey Lovullo was named playoff MVP. Following the series, seven players—Brian Anderson, Bruce Aven, Sean Casey, Einar Diaz, Richie Sexson, Dave Weathers, and Enrique Wilson—were called up to Cleveland for the stretch run.6 As of May 2022, the AA championship trophy still remains with the Bisons.

Following the 1997 season, the AA ceased operations, citing increased travel costs and expansion at the major league level. Buffalo joined the Indianapolis Indians and Louisville Redbirds from the AA, along with an expansion Triple-A franchise, the Durham Bulls, in the expanded 14-team IL. The Bisons had played in the IL from 1901 to 1970, and were eager to rekindle their in-state rivalry against Rochester and Syracuse. The Bisons would have ample opportunities to meet their rivals, as the team moved into the North Division, joining Ottawa, Pawtucket, Rochester, Scranton-Wilkes Barre, and Syracuse.

Although the Bisons switched leagues, they maintained their affiliation with the Cleveland Indians. There were some personnel changes; manager Brian Graham joined the major-league Cleveland Indians for the 1998 season and was replaced by Jeff Datz, who had guided the Double-A Akron Aeros. Pitching coach Gary Ruby was replaced by Bud Black. However, hitting coach Dave Keller and trainer Lee Kuntz remained with the Bisons. 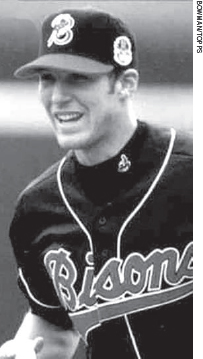 Richie Sexson was one of 13 players on the 1997 or 1998 Bisons squads who would later play in the major leagues. (Bowman/Topps photo)

The 1998 Bisons started the season with little fanfare. Although they defeated Rochester, 4-0, on Opening Day, they compiled an 11-9 record in April and 14-16 in May. On June 14, the Bisons were sitting in the North Division’s fourth place with a 30-33 record, 11½ games out of first.7 But after reeling off two six-game winning streaks during July and compiling a 21-11 August record, the Bisons found themselves competing for the North Division title. On September 6, Buffalo trailed the Syracuse SkyChiefs by a half-game. That evening, Jeff Manto’s ninth-inning three-run home run propelled Buffalo to an 8-7 win over the Scranton-Wilkes Barre Red Barons, while Pawtucket defeated Syracuse.8 The following day’s rainouts allowed Buffalo to win the division crown with an 81-62 record, only a half-game ahead of second-place Syracuse. Buffalo and Syracuse were the two winningest clubs that season, as measured by winning average.

Buffalo boasted the league’s best offensive club that season, leading all teams with 837 runs, .282 team batting average, and 206 home runs. This squad featured more power than speed, as their 27 triples and 94 stolen bases were among the league’s lowest. Three Bisons finished among the IL’s top ten in batting average among qualifiers: Lovullo (.326), Jolbert Cabrera (.318), and Diaz (.313). Ramirez was one shy of sharing the league lead in home runs (34), with Phil Hiatt finishing fourth (31). The Bisons’ pitching staff finished in the middle of the pack with a team ERA of 4.51; the staff’s combined strikeouts, walks issued, and hits allowed were also relatively mediocre. However, Jason Jacome was clearly the staff ace, leading Bisons pitchers with a 14-2 record, 1542⁄3 innings pitched, 3.26 ERA, and 109 strikeouts. Jacome’s wins total was the IL’s second-highest while his ERA was third-best. The team struggled defensively, finishing with the league’s lowest team fielding average at .969.

The Bisons swept the SkyChiefs during the first- round series in three games, with Alex Ramirez becoming the first player to hit for the cycle at North AmeriCare Park in the series opener.9 In the IL Governor’s Cup Series, Buffalo faced the expansion Durham Bulls. Buffalo won the first two games at home, then Durham rebounded to win the next two in Durham. In the deciding fifth game at Durham Bulls Athletic Park, Buffalo scored three early runs while starting pitcher Jacome pitched seven shutout innings and Jeff Sexton pitched 11⁄3 scoreless relief innings in the Bisons’ 3-1 win.10 Buffalo defeated the Durham Bulls three games to two and advanced to the inaugural Triple-A World Series, which New Orleans won three games to one.

The 1998 Bisons established an IL season attendance record at 768,749 patrons, which included postseason games.11 The Bisons had smashed attendance records 1988-97 in the American Association, and, as of May 2022, still hold eight of the nine highest single season attendance marks in minor league history, including six of seven seasons surpassing one million fans.12 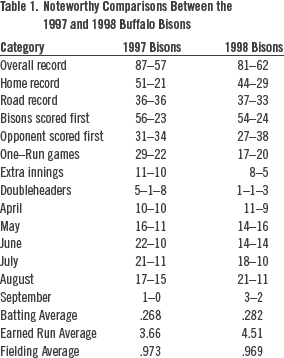 Overall, the 1997 squad was 5½ games better than the 1998 team (87-57 versus 81-62). The 1997 Bisons compiled better records for games at home, one-run games, and doubleheaders while the teams attained similar records when scoring first and during extra-inning games. Both squads played .500 baseball during April; the 1997 team peaked during the early summer while the 1998 team played better during July and August. The 1997 championship squad was arguably more balanced, finishing either first or second in several team offensive and pitching categories while the 1998 champions were more offensive-minded, outslugging their opponents more often than beating them with pitching and fielding.

The team experienced some expected turnover between the 1997 and 1998 seasons. Of the 15 players who collected at least 350 plate appearances in at least one season, listed in Table 2, 13 reached the majors, and 11 played for the parent Cleveland Indians. 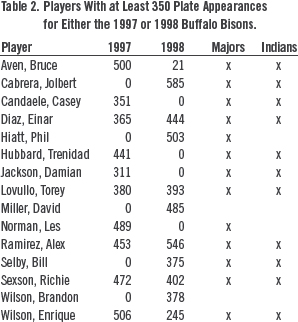 Four of the top 10 finishers in plate appearances for the 1997 Bisons did not appear for the 1998 Bisons. Conversely, four players amassed at least 350 plate appearances in both Bison seasons: Einar Diaz, Torey Lovullo, Alex Ramirez, and Richie Sexson. Interestingly, no pitcher threw at least 90 innings in both the 1997 and 1998 seasons for Buffalo.

The pitching staff experienced significant turnover between the two championship seasons, as no Bison hurler threw a minimum of 75 innings in both seasons. All eight pitchers who threw at least 90 innings in at least one of the two seasons reached the major leagues, four pitching specifically for Cleveland. 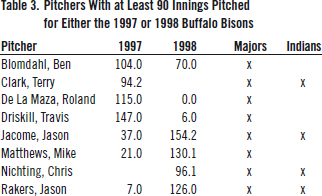 The Bisons were well-represented on the respective All-Star teams, with three on the 1997 Bisons (Richie Sexson, Damian Jackson, and Bruce Aven), and a different trio from the 1998 club (Jolbert Cabrera, Alex Ramirez, and Einar Diaz). All six played at the major- league level with the parent Cleveland Indians, with pitcher Jaret Wright starting two games during the 1997 World Series, including Game Seven. Two players, who are still local fan favorites, won team awards during both the 1997 and 1998 season: Torey Lovullo won the Frank J. “Fremo” Vallone Community Service Award (though he split the ’98 honors with Ben Blom- dahl) and Einar Diaz won the Bisons Booster Club Award for Unsung Hero.

While all minor league teams experience significant personnel changes within and across seasons, having a team win back-to-back championships while switching leagues remains a unique accomplishment.

GORDON J. GATTIE is a lifelong baseball fan and SABR member since 1998. A civilian US Navy engineer, his baseball research interests include ballparks, historical trends, and statistical analysis. Gordon earned his PhD from SUNY Buffalo, where he used baseball to investigate judgment performance in complex dynamic environments. Ever the optimist, he dreams of a Cleveland Guardians World Series championship. Lisa, his wonderful wife who roots for the New York Yankees, and Morrigan, their beloved Labrador Retriever, enjoy traveling across the country visiting ballparks and other baseball-related sites. Gordon has contributed to several SABR publications, including multiple issues of The National Pastime and the Games Project.

The author thanks Cecilia Tan for her editing, Cliff Blau for his fact-checking, and Lisa Gattie for her article recommendations.