This article was written by Samuel J. Haag

This article was published in the Fall 2017 Baseball Research Journal

Some have suggested that a baseball batter must keep their head still in order to visually track a pitched baseball, and that striding with the front foot during the swing leads to excessive head movement and disrupts the tracking of the pitch. This study analyzes the swings of 18 collegiate baseball players using a video camera and two-dimensional motion analysis program.Abstract 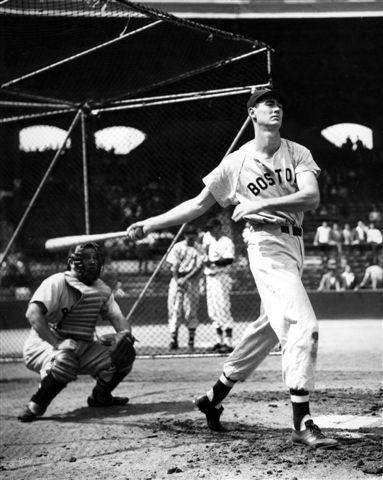 Some have suggested that a baseball batter must keep their head still in order to visually track a pitched baseball, and that striding with the front foot during the swing leads to excessive head movement and disrupts the tracking of the pitch. However, previous research has shown the head does move during the swing, and striding with the front foot contributes to weight transfer and timing of the swing. The author is aware of no research that has examined the relationship between head movement and stride foot movement during the baseball swing. The present study analyzed the swings of 18 collegiate baseball players using a video camera and two-dimensional motion analysis program. No meaningful correlations were found between movements of the head and stride foot in either the vertical or horizontal axes. These findings suggest striding with the front foot is not associated with head movement and support the notion that a stride can be a beneficial component of a baseball swing.

The task of hitting a baseball has been identified as one of the most difficult skills in sports, and numerous instructions are employed to aid performance.[fn]Dave Fortenbaugh, “The Effect of Pitch Type on Ground Reaction Forces in the Baseball Swing,” Sports Biomechanics 10, no. 4 (2011): 270–9; Hiroki Nakata, “Differences in the Head Movement During Baseball Batting Between Skilled Players and Novices.” Journal of Strength and Conditioning Research 26, no. 10 (2012): 2632–40. An Internet search for “baseball batting stride” conducted by the author produced hundreds of thousands of results with myriad observations and recommendations, but no clear consensus on how the stride affects batting.[/fn]

One such instruction is for baseball batters to use a minimal stride with the front foot when performing the baseball swing. Several research studies have examined the role of the stride in the baseball swing. Smith suggests overstriding produces excessive head movement, changing the batter’s eye level and making it more difficult to judge the pitch.[fn]Brian Smith, “Getting a Head Start in the Batting Stance.” Coach & Athletic Director 68, no. 8 (1999): 20.[/fn] Fortenbaugh et al. argue the most common approach for a baseball batter is to initially load the body’s weight toward the back foot and raise the front foot off the ground, and striding with the front foot then promotes proper timing and weight shift during the swing.[fn]Fortenbaugh, “The Effect of Pitch Type.…”.[/fn]Katsumata states that striding plays a role in fixing the front foot on the ground for rotation of the hip and upper body, thus transferring force from the lower body to the upper body when executing the swing.[fn]Hiromu Katsumata, “A Functional Modulation for Timing a Movement: A Coordinative Structure in Baseball Hitting.” Human Movement Science 26 (2007): 27–47.[/fn]

But while the baseball swing has received considerable attention in the research literature, relatively few studies have analyzed head movement during the baseball swing. Welch et al. provide a detailed description of the biomechanics of the baseball swing after testing 39 professional baseball players but do not include measures of stride height or head movement.[fn]Christian Welch, “Hitting a Baseball: A Biomechanical Description.” Journal of Orthopaedic & Sports Physical Therapy 22, no. 5 (1995): 193–201.[/fn] Using a multi-camera video analysis, Inkster et al. have studied the kinematics of the baseball swing in 20 experienced Australian baseball players and found participants tended to lower their head about 9 cm on average during the baseball swing.[fn]Brendan Inkster, “Differences in Kinematics of the Baseball Swing Between Hitters of Varying Skill.” Medicine & Science in Sports & Exercise 43, no. 6, (2011): 1050–4.[/fn] A comparison study of eight skilled baseball players and nine novices by Nakata et al. analyzed head movement in both the horizontal and vertical axes with three high speed video cameras.[fn]Nakata, “Differences in the Head Movement…”.[/fn] They found no significant differences in vertical head movement between the two groups, and the average amount of vertical head movement was similar to that reported by Inkster et al. Nakata et al. did find that skilled players demonstrated more head movement in the horizontal axis (toward the pitcher) and their head movements were more stable (less variable) than the novices. In a related study, Mann et al. examined the head movements and visual gaze of four experienced cricket batters. They conclude that skilled batters possess a superior ability to couple the direction of their head to the movement of the ball, and argue that head movement may be needed to keep a target in a consistent frame of reference.[fn]David Mann, “The Head Tracks and Gaze Predicts: How the World’s Best Batters Hit a Ball.” PLoS ONE 8, no. 3 (2013): e58289. Accessed September 7, 2014. doi: 10.1371/journal.pone.0058289.[/fn]

While it is commonly thought that elite athletes maintain a still head during hitting actions, the available (though limited) research to date shows the head does move during the baseball swing.[fn]Ibid.; Nakata, “Differences in the Head Movement…”; Inkster, “Differences in Kinematics of the Baseball Swing…”.[/fn] Even though some baseball coaches and hitting instructors may encourage batters to minimize their stride to keep the head still, the association between movement of the stride foot and the head during the baseball swing has not been thoroughly studied. This anecdotal suggestion may be hindering the swing mechanics of players that would normally rely on a stride for proper weight shift and timing. Therefore, the purpose of the present study was to examine the relationship between stride foot movement and head movement during the baseball swing. Since this study was exploratory in nature, it was hypothesized that movement of the head would not be correlated with movement of the stride foot during the swing. Greater understanding of this relationship could help enhance baseball batting performance and allow coaches and instructors to provide the most accurate information for their players.

Eighteen members of a National Collegiate Athletic Association (NCAA) Division II baseball team participated in the study. Since the participants were experienced collegiate players, it was assumed they would each demonstrate a consistent baseball swing. The average age for the group was 20.1 years (SD = 1.1 years), with an average height of 1.82 m (SD = .05 m) and average weight of 85.6 kg (SD = 9.8 kg). Fourteen of the participants batted right-handed, and four batted left-handed. Each participant was free from injury and completed a consent form prior to the study.

During an organized team practice in an indoor facility, participants performed five swings at a baseball placed on a batting tee at the height of each participant’s waist. Participants were instructed to perform a normal swing to make solid contact on each trial, and each participant used his own bat.

A digital video camera recording at 60 frames per second was positioned on a tripod about 3.8 m from the tee, providing a side view of the swing. Pieces of white tape (2 cm by 2 cm) were placed on the anterior aspect of the participant’s stride (front) foot and on the lateral aspect of the participant’s hat facing the camera to serve as markers for motion analysis (see Figure 1). Each participant completed the trials in about two to three minutes. All procedures were approved by a university institutional review board. 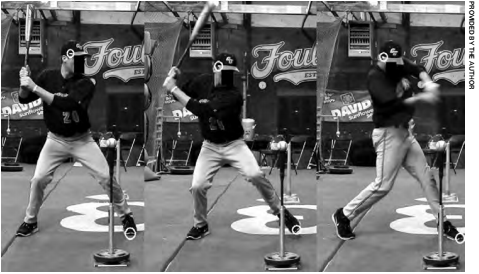 Figure 1: Phases of the baseball swing from initiation to ball contact. Foot and head landmarks used for motion analysis are circled. Click image to enlarge.

Video recordings were analyzed with a personal computer using Kinovea, an open-source video analysis software program that has been employed in previous kinematic studies.[fn]Joan Charmant, Kinovea (Version 0.8.15) [Software]. Available from http://www.kinovea.org/; Carlos Balsalobre-Fernandez, “The Concurrent Validity and Reliability of a Low-Cost, High-Speed Camera-Based Method for Measuring the Flight Time of Vertical Jumps.” Journal of Strength & Conditioning Research 28, no. 2 (2014): 528–33; Matthew Barr, “Sprinting Kinematics of Elite Rugby Players.” Journal of Australian Strength and Conditioning 21, no. 4 (2013): 14–20.[/fn] A two-dimensional coordinate system was used to measure the change in position of the head and foot landmarks in both the vertical and horizontal axes. The coordinate system was calibrated by using the length of the base of the batting tee as a reference line. This calibration was done separately for each video file. 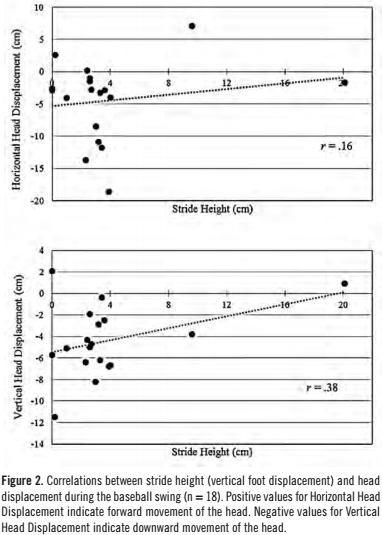 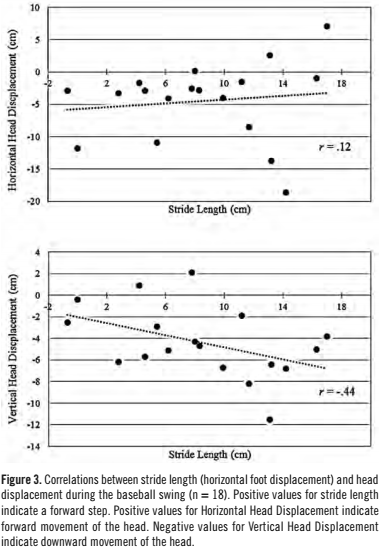 While keeping the head still is often recommended for baseball batters, the head does move during the swing.[fn]Nakata, “Differences in the Head Movement…”; Inkster, “Differences in Kinematics of the Baseball Swing…”.[/fn] Despite this evidence, baseball coaches and instructors may advise against using a stride because they believe it causes excessive head movement and interferes with visual perception of the pitch. As the author could locate no prior research that specifically addressed this issue, the present study examined the relationship between stride foot movement and head movement during the baseball swing in collegiate baseball players.

Mann et al. proposed coupling head movement to movement of the ball may be an important element in interceptive tasks like baseball batting.[fn]Mann, “The Head Tracks and Gaze Predicts.”[/fn] In the present study, head movement was observed during the swing, which is consistent with previous research.[fn]Nakata, “Differences in the Head Movement…”; Inkster, “Differences in Kinematics of the Baseball Swing…”.[/fn] Head movement was highly variable between players, as standard deviations were relatively large, especially in the vertical axis. Additionally, while most players displayed downward and backward displacement of the head during the swing, three players moved their head forward and two players moved their head upward. The high degree of variability between participants demonstrates that each player has acquired an individualized movement pattern that involves coordinating his head movement with the rest of the swing.

The present findings suggest stride height and stride length are not associated with displacement of the head during the baseball swing in experienced collegiate baseball players. Head movement during the baseball swing may be beneficial if it is purposeful and consistent. Researchers should continue to examine head movement and its coupling with visual perception during the baseball swing. Future research in this area should also include participants of varying skill level, as several studies have shown differences in swing mechanics when comparing skilled and unskilled players. Other outcome measures such as bat velocity could also be considered. Current research evidence indicates baseball batters can be encouraged to use a stride provided it doesn’t interfere with their balance and swing mechanics. An efficient stride can be an essential element of a proficient baseball swing.

SAMUEL J. HAAG is an assistant professor of Kinesiology and Health Sciences at Concordia University, St. Paul. He received his B.S. in Physical Education-Exercise Science from Southwest Minnesota State University (2006), M.S. in Human Performance-Applied Sport Science from the University of Wisconsin-La Crosse (2008), and Ph.D. in Kinesiology from the University of Minnesota (2011). His research examines various aspects of motor performance in sport and physical activity. He is a member of the American College of Sports Medicine and the North American Society for the Psychology of Sport and Physical Activity.

This research was supported by a Faculty Development Grant from Concordia University, St. Paul. Findings from this research were presented by the author in a poster session at the 18th International Conference on Perception and Action in Minneapolis.