This article was written by Bob McConnell

Bill Terry was a Hall of Fame first baseman and player-manager. He was also a sensational left-handed pitcher – at least, for one Class-D season in Georgia.

BILL TERRY IS PROBABLY BEST KNOWN as the last National League player to hit .400 (.401 in 1930). He had a lifetime batting average of .341 over 14 seasons and had enough extra-base hits to give him a .506 career slugging average. Less well-known is that Terry was an excellent first baseman. He led the NL five times in putouts, five times in assists, and three times in fielding percentage. As a player-manager he led the New York Giants to three pennants and one world championship.

Almost completely forgotten is Terry’s record as a minor-league pitcher. A native of Georgia, he started with Dothan in the Class-D Georgia State League in 1915. The slender six-footer was only sixteen but looked older. He pitched three games for Dothan, losing two and getting a “no-decision.” In one outing the young lefthander walked 10 batters. He was cut in mid-May, and there was no published news about him until the June 21 Griffin Daily News said that “Harry Mathews, of the Newnan club, has signed Lefty Terry, who failed to make good with Dothan in the Georgia State League. Terry is just a kid, but it is said that he has the goods all right. He was released down there over the manager’s protest.”

Newnan, a town of about 5,500, was in the six-team Class-D Georgia-Alabama League. The other clubs were located at Griffin, LaGrange, and Rome, Georgia; and Anniston and Talladega, Alabama. Newnan did not have a newspaper. Fortunately, the Griffin Daily News provided some information and the Birmingham Age-Herald carried box scores of all league games during the short summer season.

In spite of the lack of publicity, Terry s 1915 pitching stint with Newnan bordered on the sensational. (He batted only .143 in 28 at bats. At Dothan he had two hits in 10 at bats.) Bill pitched in his first game on June 16, beating Talladega and allowing only five hits and one run. He was then put in the starting rotation and on June 21 defeated Rome, allowing two runs on six hits and no walks.

Terry then reeled off three consecutive shutouts. The second was a no-hitter against Anniston on June 30. The third was a 13-inning victory over Rome in which he yielded only four hits and one walk. After winning his first six starts, Terry went down to his only defeat, dropping a 2-1 decision to Talledega on July 10.

Bill pitched in the last game of the season on July 14. It would be a fitting climax to this story to say that the pennant was on the line. However, Newnan had a one-game lead over Talladega going into the final day and even with a loss could clinch the pennant by percentage points. Nevertheless, the young southpaw came through with a sparkling 1-0 win over LaGrange.

Terry’s game-by-game record is carried in the accompanying chart. Each of his eight games was complete and four were shutouts. He never allowed more than two runs in a game, including his one loss. On a 9-inning game basis he gave up 0.8 runs, 4.9 hits, 1.9 walks, and struck out 4.0 batters. He obviously was not a strikeout pitcher. What was surprising in light of his wildness at Dothan was that he had such good control, particularly for a sixteen-year-old. 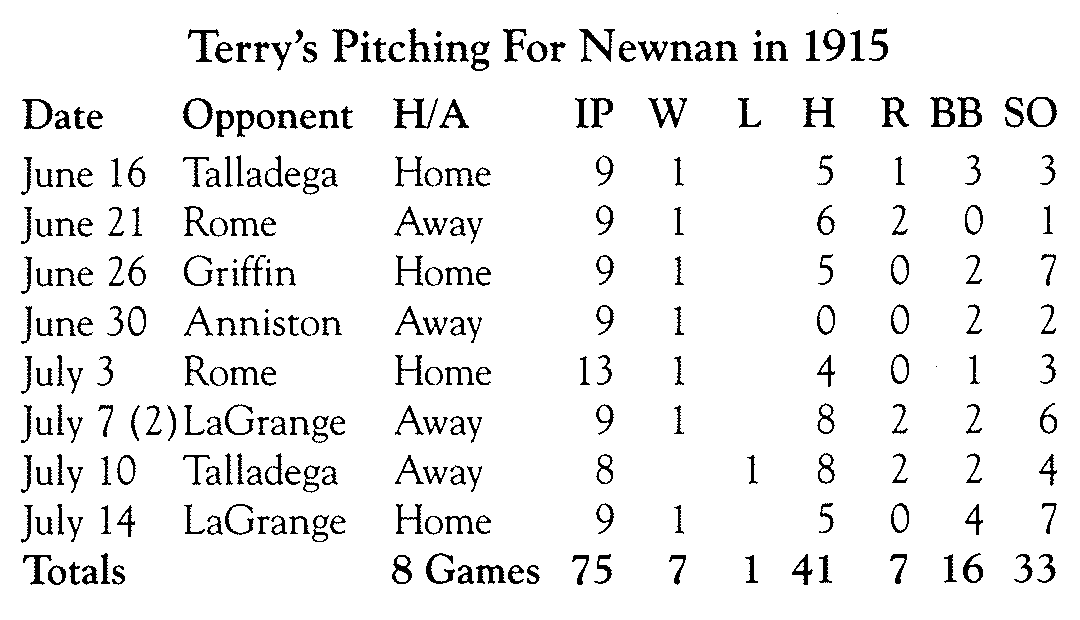 Terry returned to Newnan at the beginning of the 1916 season. He didn’t dominate as he had the year before, but his record was good enough (11 wins and 8 losses) for him to be sold July 20 to Shreveport in the Texas League. He was 6-2 there with a 1.07 ERA. Spending the 1917 season at Shreveport, he won 14 and lost 11. By this time he was playing part-time in the outfield and pinch hitting. However, his batting average in 95 games was only .231. It was time to make a decision about his career.

Although only eighteen years old, Bill married a Memphis girl and went to work for Standard Oil in Memphis. For the next four years, 1918-21, he played semipro ball on the strong company team and developed a basis for the future nickname of Memphis Bill. His diamond performance came to the attention of Tom Watkins, owner of the Memphis Southern Association team, who recommended him to manager John McGraw of the New York Giants. McGraw, more impressed with Terry’s hitting than his pitching, assigned him to Toledo in the American Association.

With his pitching career over – he never even made a token mound appearance in the majors – William H. Terry removed any possibility that he might he confused with William J. (Adonis) Terry, a well-known nineteenth-century hurler. Bill Terry the younger went on to a Hall-of-Fame career as a superb hitting and fielding first baseman. Once he became an established star, he dismissed his early pitching effort as “nothing to write home about.” But Memphis Bill didn’t have to be apologetic about his 47-33 mound record. In fact, he could be justly proud of his spectacular performance with Newnan in 1915 when he was only sixteen. Bill Terry died recently. His pitching record should not die with him.

Bob McConnell is a retired engineer and a charter member of SABR.