When Frank Thomas reached base in 15 consecutive plate appearances in May 1997, all the record books were examined to see who was the all-time record holder of this obscure feat. The only book with this entry listed was The Sporting News Complete Baseball Record Book. To no one’s surprise, Ted Williams was listed with the major league record, when (as a 39-year-old) he reached base in 16 straight plate appearances in late 1957.

However, not everyone was in agreement that Williams was the record holder. Seymour Siwoff of the Elias Sports Bureau, baseball’s official statisticians, was contacted by Jerome Holtzman of the Chicago Tribune for Siwoff’s opinion on the matter. “We can’t verify [that Williams holds the record],” he was quoted. “We haven’t put it in our record book because we’ve never been satisfied with the research.” Craig Carter, The Sporting News’s longtime and highly respected editor, said that “somebody had looked it up.” But, like many records, it is difficult to establish the record holder because play-by-play accounts of old games, which would be necessary to find a record like this, can be so hard to find.1

Holtzman’s gripe was how Williams could be the record holder when no one could say who previously held the record. The subject came up again when Barry Bonds and John Olerud each reached base 15 consecutive times in 1998.

This is where my work on Frank Ward, who was occasionally called “Piggy,” comes in. According to my research, Ward reached base safely in 17 consecutive plate appearances in 1893. Just for clarification, “reached base safely” can mean reaching base on a hit, walk, or hit by pitch, but reaching on force-outs or errors are not included. Of course, this doesn’t necessarily mean that Ward is the all-time record holder for consecutive times on base (there may be a longer one out there waiting to be found), but it does mean he has supplanted Ted Williams’s mark of 16. To be correct, Williams actually never held the record, since Ward’s streak was first.

Ward’s streak began on June 16, 1893, during a six-inning, rain-shortened game between Baltimore and Cincinnati. Baltimore, Ward’s team, scored 19 runs in the final three innings of the game, including four by Ward. Ward went 2-for-3 with two walks. According to newspaper reports, Ward was put out in the first inning, singled in the fourth inning, tripled and walked in the fifth inning, and then walked again in the sixth inning. A drenching rain had been falling for some time now (probably the cause of Baltimore’s sudden offensive output), and the game was called after six innings, with Frank Ward reaching base safely in his last four plate appearances.

Here’s where the story becomes even more interesting. After that day’s game, Ward was traded to the team in the other clubhouse, Cincinnati, for pitcher Tony Mullane. Ward would have a day off on the 17th, then continue one of the hottest hitting streaks in history.

On June 18, 1893, Ward, now playing for Cincinnati against Louisville, set a record that has yet been unmatched. In a nine-inning game, he came up to bat eight times and reached base safely in every single one of them. Although newspaper accounts of the specifics of the game are scant due to Cincinnati scoring 30 runs, all sources agree that Ward was 2-for-2 with five walks and was also hit by a pitch during the game. He started the day off with two walks in the first inning, and continued to reach in his next six times up to bat.

At the end of June 18, Ward had reached base in 12 consecutive plate appearances. He marched on against Louisville on June 19, when he began with a single in the first inning, then walked in the second. He then singled in the fifth, sixth, and seventh innings. For the day, the damage was 4-for-4 with a walk.

Frank Ward had now reached base safely in 17 consecutive plate appearances in a stretch spanning three games, two cities, and even two different teams. He was finally stopped by Louisville’s George Hemming in the first inning of the June 20 game vs. Louisville. He finished the day 0-for-3 with a walk.

Ward’s streak, which ran from June 16 through June 19, included seven singles, no doubles, one triple, no home runs, eight walks, and one hit by pitch. He reached in his final four plate appearances with Baltimore before being traded, and started his Cincinnati career by reaching in his first 13 times up to bat.

So, let Frank Ward’s feat be listed in the record books — with Williams being relegated to the American League record holder, and Bonds and Olerud limited to being the “modern” National League record holders — that is, until someone can find a streak even longer than Ward’s, if such a feat has ever taken place.

Ward’s great achievement is made even more exciting when seen in the context of the other long streaks of reaching base safely — Williams at 16, and Thomas, Bonds, and Olerud at 15. As it stands, those are the only players besides Ward known to have reached base in 15 consecutive plate appearances.

Table 1: Streaks of 15 or More Consecutive Times of Reaching Base Safely 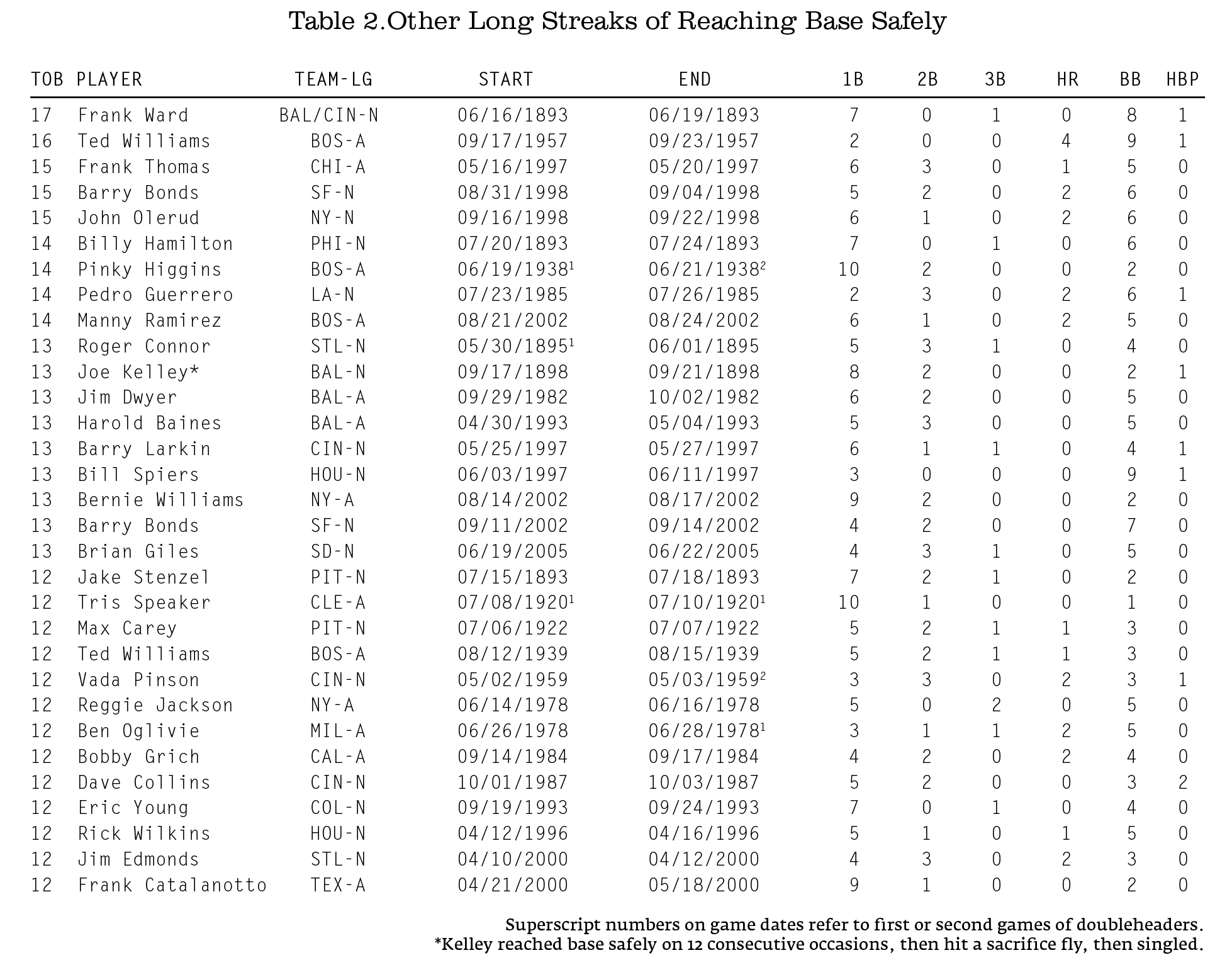 I doubt anyone would have suspected a lifetime .286 hitter would have put together one of the top streaks in baseball history. Ward’s streak did not get much press at the time, and it apparently didn’t help him keep a job, either; he played only 42 games for Cincinnati that season and is reported to have played for at least 30 different baseball clubs in 20 leagues throughout his career. Also, although he is listed as “Piggy” in the encyclopedias, my research has shown that Frank Ward was very rarely called that, and, when it was used, was only done so mockingly. Interestingly, in an exhibition game in Ohio in 1894, the fans nicknamed Ward “Baby Ruth,” after the three-year old daughter of President Cleveland.2 So, while Ted Williams can’t claim the record anymore for consecutive times reaching base, we can say that only “Baby Ruth” himself is known to have surpassed The Kid.

TRENT McCOTTER lives in Chapel Hill, NC, where he is currently a student at the University of North Carolina.

It took a team to put together and verify all the information in this article, and many acknowledgments are due. Pete Palmer wrote the program that found the long streaks in the chart above, so I owe him a huge thanks. He used Retrosheet data in his program, so everyone who’s done work for the most important baseball research project ever also deserves a big thank-you from me for all their work. For having the opportunity to find Ward’s streak, I thank Tim Wiles and Jim Gates at the National Baseball Hall of Fame, who allowed me access to the daily sheets without having to travel to Cooperstown. Greg Rhodes and Chris Eckes with the Cincinnati Reds also helped finding details on Ward’s streak. Brian Rash, Gabriel Schechter, Steve Gietschier, and Bill Deane all sent copies of daily sheets that I used in finding other long streaks of reaching base. Baltimore’s Enoch Pratt Library and The Public Library of Cincinnati provided extremely helpful newspaper copies. Finally, I’d like to thank Jim Charlton, the editor of this journal, for his continued guidance and help with my work on this article, as well as the other piece I wrote for this publication.

(If you know of a long streak of reaching base that does not appear on the list in Table 2, please send it to me at my address in the SABR member directory.)

2 The quote about Ward being called Baby Ruth was in the September 23, 1894, Washington Post on page 15.