This article was written by Dave Frishberg

This article was published in the The National Pastime (Volume 27, 2007) 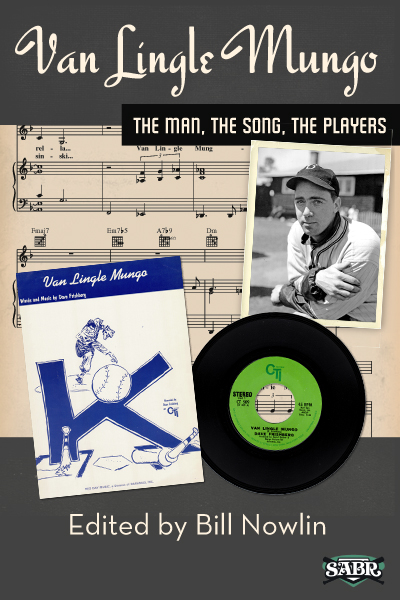 In 1969, I was working as a pianist in New York City and beginning to write songs. I composed a rather brooding piece in what I considered a bossa nova style — a wide-ranging melodic line and a wandering tonal center. I had equipped the melody with two differ­ent lyrics. One was an angry satirical verse titled “Dear Mister Nixon;” the other was called “Don’t Look Behind You” and soberly implored the listener to face the future. Neither lyric seemed to match the ambitious melody line.

One night I was paging through the newly published Macmillan’s Baseball Encyclopedia by and my eyes fell on the name Van Lingle Mungo. “VAN LINGLE MUNGO” — the name scanned perfectly with a recurring melodic figure in my song, and I instantly sang it out loud. I knew then that the lyric would be only names­ not names of famous stars, but names that evoked my childhood memories and, incidentally, illuminated some fragments of forgotten baseball history. I dived into the book assembling names that scanned, rhymed and related loosely to those years, the years of my childhood passion for the game.

Within an hour or so I had a complete lyric. About a month later I recorded an album of my songs including “Mungo,” and that turned out to be the only track that got any airplay.

I was surprised. But I always felt the lyric wasn’t fin­ished, it wasn’t doing the job and I kept tinkering with it. In my opinion I improved the song. I took out certain names from the original lyric and replaced them with names from an earlier (wartime) era so that the nostalgic focus might be sharper.

Johnny Kucks and his rhyme mate Virgil Trucks had to go and were replaced by Lou Boudreau and Claude Passeau, whose names certainly sang better. The replace­ment of Roy Campanella’s conveniently rhyming name was necessary because he was too recent. So I changed it to Art Passarella (an umpire), and that seemed to do the job: Gardella, Passarella, and Estalella.

Then I learned that Bob Estalella’s name didn’t rhyme in the first place, because it was pronounced as in Spanish: Esta-leya. So the whole rhyme scheme should have been scrapped, starting with “Danny Gardella,” and now I stand forever humiliated in Baseball Songland. What did I know? I grew up in a minor league town and never heard Estalella’s name uttered, only saw it in print. Same goes for Johnny Gee, whose name I mangled on the record with a soft “g.” There may be other names I’m mispronouncing, but at this stage further corrections would only confuse me.

In my search for relevant names that scanned, “John Antonelli” was an unfortunate choice, and it’s annoying that he’s in the song, because there turns out to be two John Antonellis whose major league careers nearly overlapped. I was thinking of the third baseman who was up with the Cardinals and Phillies dur­ing the war; I had seen him play with Columbus. I wasn’t even aware of the more famous Johnny Antonelli, the left hander for the Giants. By the time Antonelli #2 came along I had already traded Duke Snider for Duke Ellington.

If you are keeping track, there are currently four surviving players from the Mungo song. I confirmed the dates of demise on a website called The Baseball Almanac, wherein biographical and statistical data claimed to be updated as of March 1, 2005. Of the original 37 names, the surviving Mungolians are: Joost, Pesky, and Basinski. I’m positive Eddie Basinski is still alive and well, because he lives here in Portland and enjoys consid­erable celebrity and adulation as a Portland Beaver immortal. I had occasion to meet him once, and I excit­edly told him how I used to watch him with the St. Paul Saints in 1946.

“You and Gene Mauch were a great double-play com­bination,” I blurted. Basinski frowned and said, “Mauch wasn’t much help.”

“Yes, have you ever heard my song, ‘Van Lingle Mungo?’”

Basinski stepped back, stared at me as if I were from Mars, excused himself, and walked off to chat with someone else.

The only other guy from the song I ever met was Mungo himself, who arrived from Pageland, South Carolina, to be on the Dick Cavett Show and listen to me sing the song. This was 1969, when Cavett had a nightly show in New York. Backstage, Mungo asked me, “When do I get the first check?”

When he heard my explanation about how there was unlikely to be any remuneration for anyone connected with the song, least of all him, he was genuinely down­ cast. “But it’s my name,” he said.

I told him, “The only way you can get even is to go home and write a song called ‘Dave Frishberg.”‘

DAVE FRISHBERG, pianist, songwriter; and recording artist, grew up in St. Paul and was an avid follower of the St. Paul Saints during the 1940s. He hasn’t followed current baseball since then, but he is a member of SABR and a collector of antique baseball periodicals and books.