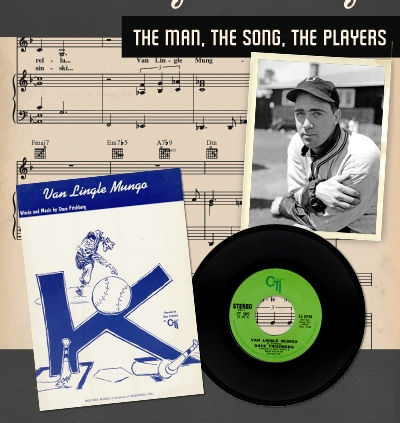 Add a musical new book to your baseball collection with the newest title from the SABR Digital Library:

Just as 1930s and 1940s Brooklyn Dodgers and New York Giants pitcher Van Lingle Mungo was surprised that Dave Frishberg wrote a song around his name back in 1969, so he might have been surprised to come across this book in the year 2014. Frishberg’s song “Van Lingle Mungo” listed 37 ballplayers in the lyrics. A different version contained three different names. That’s a total of 40, and all 40 are represented with biographies in this book.

Dave Frishberg himself has been a member of SABR since 1984. This book, largely comprised of biographies of all the players mentioned in the song, is the product of the hard work and dedication of 31 other SABR members.

SABR is the Society for American Baseball Research, a group of over 6,000 enthusiasts about the game of baseball whose research interests range from the game’s history to statistical analysis, records, cultural impact, and more. The BioProject is a SABR effort to research, write, and publish biographies of every player — and every person — ever connected with organized baseball. Anyone with a love of baseball can join SABR and become a part of these efforts.