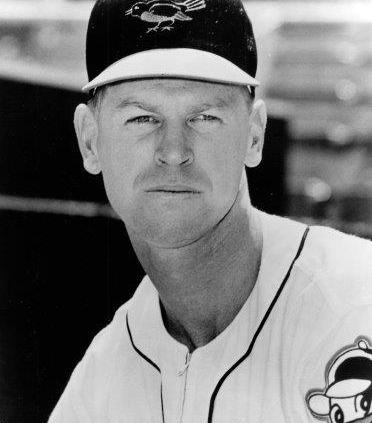 This article was written by Thomas Van Hyning 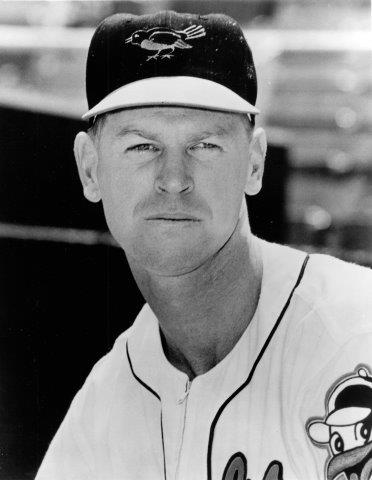 Dick Hall’s trade to the Baltimore Orioles — with Dick Williams — on April 12, 1961, for Jerry Walker and Chuck Essegian, was influenced by Charles Finley’s resolve not to trade with the Yankees, a team he despised. Finley once pointed a school bus in the direction of New York and burned it to symbolize the end of the special “Kansas City-New York Yankees relationship.”1 Lee MacPhail, Baltimore’s General Manager (GM), earned his 1939 degree from Swarthmore, Hall’s alma mater. “Dick Hall was a [1952] Swarthmore graduate, so you might say I was prejudiced,” affirmed MacPhail, who had high hopes for Hall.2

Hall was 8–13, 4.05 ERA, 1.212 walks plus hits per innings pitched (WHIP) with the 1960 A’s. He transitioned from a starter to an excellent reliever. His pinpoint control was despite a “herky-jerky motion” that made him look like “a drunken giraffe on roller skates.”3 Baltimore Sun sportswriter Mike Klingaman noted the 6’6” Hall had a “lofty IQ, low ERA, could compute batting averages in his head; most of those who faced him watched their numbers fall.”4 Hall started 13 games in 1961, relieved 16 times, and went 7-5 with a 3.09 ERA. His 122.1 innings included 92 strikeouts–30 walks.

On July 24, Hall relieved Dave McNally in the third, after Don Zimmer’s run-scoring hit, finished the game, and retired the last four Senators. On August 4 at Yankee Stadium, Hall retired eight straight to preserve Steve Barber’s victory. On August 9, he set down nine Senators, and on August 15, retired four straight Twins at Minnesota. Two days later, he pitched the ninth in a 6–1 victory at Kansas City. Ed Charles struck out; Norm Siebern popped to third; Doc Edwards skied to left. Seven strikeouts, three saves, and one win comprised this streak. Albie Pearson (Angels) ended it with a sixth-inning single in Baltimore, August 21.

Baltimore’s 1966 spring training began in Miami, Florida, February 22. On March 7, Dick Brown, Hall’s 1963-65 road roommate, was diagnosed with a brain tumor and never played again. Andy Etchebarren became the primary catcher.11 Baltimore clinched their first AL pennant since moving from St. Louis in Kansas City, September 22. Hall’s 1.0152 WHIP was from 59 hits and eight walks permitted in 66 innings. He was shut down due to right elbow tendinitis, with a 6–2 record and 3.95 ERA, but traveled with Baltimore to Los Angeles for the first two World Series games.

Hall called Dalton pre-spring training 1969 and was told: “Come down; we’ll give you a shot.”15 Earl Weaver had become Orioles manager after Dalton fired Hank Bauer during the 1968 All-Star break. Hall impressed Weaver with 11 scoreless innings, motivating Weaver to state, “The way he has looked, Hall could pick up the phone right now and get five jobs.”16 Hall liked Weaver’s style.

“Weaver would not bring in a closer to start an inning…save rules were different,” said Hall. “You could get a save with more than a three-run lead.” 17 Hall’s pitching style suited Weaver just fine. “I bent over like a sidearm pitcher, but my release point was on or near the ear,” said Hall. “Threw overhand from the side. Ball came out from my uniform…arms and legs, sneaky riding fastball.”18

I came in the 12th with bases loaded and got two quick strikes on Cárdenas; threw a slider in the dirt — swung and missed; committed himself a split second too soon — turned just before I released the ball…Roseboro flied to left, on an outside fastball.19

Baltimore won, 3–2, on a walk-off bunt by Paul Blair. Twins pitcher Ron Perranoski called it “a perfect bunt.”20 Billy Martin, Twins manager, told a sportswriter, “There’s no way to beat a perfect bunt.”21 Baltimore won games two and three. “It was the only time I’ve ever seen a team give up,” said Hall. “Carew trotted after a ball [game three] and it’s over.”22

Hall recalled Game Four of the 1969 World Series, a 10-inning one. Earl Weaver was ejected for arguing balls-strikes in the third. “It was a sunny day in Shea,” remembered Hall. “Buford is looking into the sun [10th] and there’s a huge, black background due to the stands. Buford could not pick up the ball hit by [Jerry] Grote. Belanger almost caught it.” Grote’s bloop double put him at second. Gil Hodges summoned Rod Gaspar to pinch-run. Coach Billy Hunter had Hall walk Al Weis intentionally. Pete Richert faced J.C. Martin, who bunted. Hall indicated: “Martin is running in fair territory; ball ricochets off his shoulder and Gaspar scores.”23 Hall got the loss. He took the CPA three-day exam — three weeks later — and tied for second of 200 candidates who sat for it! 24

Hall won Game One of the ALCS, October 3, with 4.2 scoreless innings of relief; he faced 14 batters, gave up a hit to Tony Oliva, and fanned three. He induced Danny Thompson to hit into a 4-6-3 double-play, after relieving Miguel Cuéllar, whose grand slam in the fourth preceded Hall’s sixth-inning single and run, in a 10–6 win. “Hall was a great teammate and we conversed in Spanish,” recalled Cuéllar. “His wife is from Mazatlán, Mexico, where he played winter ball.”26

In Game Two of the 1970 World Series, October 11, Hall preserved a 6–5 win. Tony Pérez grounded out, with two on, before Johnny Bench, Lee May, and Hal McRae were retired in the eighth and Tommy Helms, Bernie Carbo, and Jimmy Stewart retired in the ninth. Tony Pérez opined, “He’s got that funny motion. He throws a change-up or a palm ball. I don’t know what it is. Oh, that pitch he gave to me was a good one to hit.”27 Johnny Bench added, “I tried to go right on him, then I changed my swing and I got all screwed up.”28 Brooks Robinson ensured Hall translated Spanish-speaking interviews with Cuéllar and Marcelino López.29

Hall pitched the ninth in Game Two of the 1971 World Series on October 11. The Orioles were up, 11–3, when Weaver told Hall, “We got a big lead. I need Palmer later in the Series.”30 Al Oliver singled to right; Bob Robertson popped to 2B; Manny Sanguillen grounded into a forceout and Milt May, hitting for Jackie Hernández, grounded to Boog Powell, who flipped it to Hall. “I put the ball in my back pocket — saved it — [was] the last pitch I ever threw in a regular season or World Series game,” said Hall. “It’s in a plastic case…[I] have shown it to my grandson.”31

Sadaharu Oh hit the last home run Hall gave up, in Kokura, an ancient castle town, during the Orioles post-1971 World Series tour of Japan. Baltimore went 12-2-4. “After the last game, I [knew I] wasn’t coming back in 1972…arm trouble,” said Hall, who pitched three innings against the Yomiuri Giants.”32

2 Lee MacPhail, My Nine Innings: An Autobiography of 50 Years in Baseball (Westport, CT: Meckler Books, 1989), 69. MacPhail was a high school and Swarthmore College classmate of Paula Swarthe Van Hyning, the author’s mother. The author corresponded with MacPhail in 2011 on various topics.

31 Dick Hall, telephone interview, May 3, 2019. Roberto Clemente, MVP of the 1971 World Series, was the first player in a NL or AL uniform to hit a home run off Hall, in a 1955 spring training Pittsburgh intersquad game, at Ft. Myers, Florida.

32 Dick Hall, telephone interview, May 3, 2019. Hall visited with his brother-in-law, a Pan Am pilot, who stayed at the same hotel in Japan.

34 Paul Hartzell, e-mail to Thomas E. Van Hyning, May 10, 2019. Hartzell grew up in Bloomsburg, Pennsylvania, a three-hour drive from Baltimore. He pitched for the 1980 Orioles and 1973 Johnny’s amateur team in Baltimore. Rich Dauer, Mike Mussina, and Walter Youse (posthumously) were inducted at the 2012 Orioles Hall of Fame Ceremony. Jim Gentile and Stu Miller were inducted with Hall — 1989.