This article was written by Alan I. Abramowitz

Unlike every other major professional sport in the United States, Major League Baseball has no cap on team payrolls. As a result, there are vast disparities in the size of these payrolls. Teams from large markets with lucrative local television and radio contracts can vastly outspend teams from small markets that lack such contracts. In the 2005 season, team payrolls ranged from 29.7 million dollars for the Tampa Bay Devil Rays to 208.3 million dollars for the New York Yankees. And the gap between baseball’s haves and have-nots has been growing. Between 1996 and 2005, the difference between baseball’s largest payroll and smallest payroll increased from 36.8 million dollars to 178.6 million dollars.

Still, there are many exceptions to the rule that a larger payroll means greater success on the playing field. In 2005, the San Francisco Giants with a payroll of 90.2 million dollars won only 46.3% of their games while the Cleveland Indians with a payroll of only 41.5 million dollars won 57.4% of their games. And such anomalies are not rare. In recent years teams with very modest payrolls, like the Minnesota Twins and the Oakland A’s, have enjoyed considerable success while teams with much larger payrolls, like the New York Mets and Texas Rangers, have performed poorly.

So overall, how much difference does money make in team success? To answer this question, I calculated the correlations between team payrolls and won-lost percentages for the last 10 baseball seasons. The results are displayed in Table 1. A correlation coefficient measures the strength of the relationship between two variables. It can range from zero (no relationship) to one (a perfect relationship). The squared correlation coefficient measures the proportion of variation in one variable that is explained by the other variable. 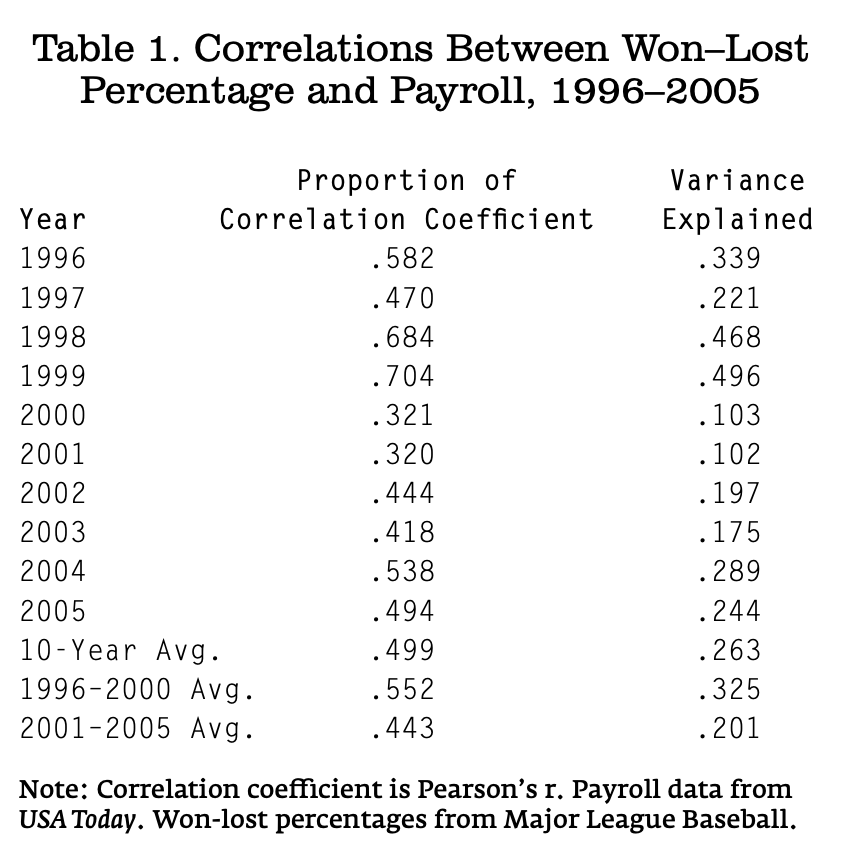 Despite the growing disparity in the size of team payrolls between 1996 and 2005, there is no evidence here that the impact of spending increased over time. In fact, the average correlation between team payrolls and won-lost percentages was somewhat larger during the first half of this time period than during the second half: the proportion of variation in team success explained by spending declined from an average of 32.5% between 1996 and 2000 to an average of only 20.1% between 2001 and 2005.

The general conclusion that can be drawn from these data is that team payrolls have only a limited influence on what happens on the playing field. Further evidence for this proposition can be seen by comparing actual team performance with what would be expected based solely on the size of team payrolls. Along these lines, Table 2 displays the difference between actual and expected wins per season for every major league team between 1996 and 2005.

These results demonstrate that while money matters in baseball, it matters considerably less than many people assume. A team’s success on the playing field depends as much on leadership, organization, and baseball knowledge as it does on the size of its payroll.

Table 2. Difference Between Actual and Expected Wins per Season, 1996–2005

ALAN I. ABRAMOWITZ is an Alben W. Barkley Professor of Political Science at Emory University.