This article was published in Spring 2021 Baseball Research Journal 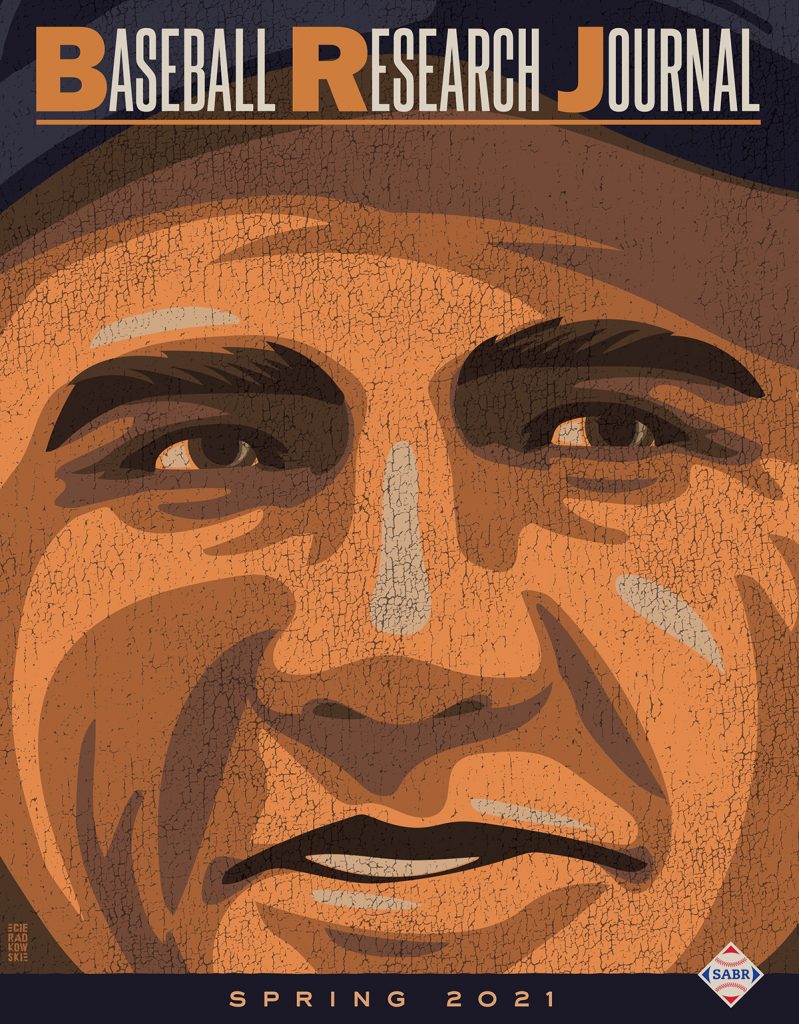 Welcome to the Spring 2021 issue of the Baseball Research Journal. It’s been a banner year for baseball research and writing. Why? Because during the lockdown(s) of 2020, when folks couldn’t go anywhere or do anything else, a lot of SABR members spent their time researching and writing. The result was a bumper crop of papers: so many that some which arrived in July 2020 aren’t going to see print until November 2021 at the earliest. In the ten years that I’ve been editing the Journal — and I just realized it has been ten years! — we’ve never had a backlog quite like it. But we’ll get through it, just like we’re getting through the pandemic itself, with patience and taking things one step at a time.

One thing I do with the submissions for each issue of the BRJ is categorize them into thematic groups. Almost never is there an article that can’t be related to two or three others. Finding the threads of connection and coincidence between the articles is part of the puzzle of putting together an issue. Rarely does one article shed light directly on another, but they do sometimes seem to be in confluence, where a mode of thought or a passing mention in one article suddenly seems applicable in the next. No matter how specialized the subject, no baseball-related article sits entirely in its own silo. That’s part of the fun.

This time around, by pure coincidence, we have three articles with a Babe Ruth connection, from exploring Ruth’s path through Japan in 1934 with Steven Wisensale to Roberts Ehrgott debunking some “common wisdom” about the “called shot,” plus Chadwick Award winner Michael Haupert’s fascinating piece on “The Business of Being the Babe.” We also have more articles besides that one which go into baseball players’ off-field business and media opportunities, as John Schwarz discusses Ted Williams’s business agent, “Mr. Golf” Fred Corcoran, and Michael Hoenigmann recalls that not only was Mike Piazza a prodigious slugging catcher, his IMDB/Hollywood resume is nearly as impressive. When you add Mike Kaszuba’s story of seeking out slugger Dave Nicholson, I felt we had a section that went beyond The Babe to encompass the way baseball hitters become heroes, and how these figures become part of the fabric of our culture and our lives.

Stories from the margins, of course, fascinate me, too. Bill Nowlin reveals how a barnstorming team of Black players brought the “Boston Red Sox” to Darby, Pennsylvania, for an exhibition in 1918, while Dan Schoenholz explores one of the wacky experiments Carl Zamloch exhibited about ten years later in California: “reversible baseball” in which the bases could be run counter-clockwise. Sounds like a wacky promotion that could have been run in the early 1990s in the Niagara area of Canada, where David Siegel reveled in the brief, shining moment when there were four pro ball teams within driving distance. As many of you know, the minor leagues as we knew them ceased to exist in 2020, not because of the pandemic, but by fiat of Major League Baseball. This means fewer teams in fewer places.

I don’t think it means fewer stories, however. We’re nowhere near knowing everything about this game. This issue honors the Chadwick Awardees for 2021: Robert W. Peterson, author of Only the Ball Was White, Gary Ashwill, the force behind Seamheads’ Negro Leagues stats database, and Alan Nathan, the preeminent physicist studying baseball. Each of them, like the other authors in this issue, found no shortage of topics to explore. This thing we call “analytics” is not, in fact, “new,” but the wholehearted embrace of analytics by teams and sports media, is. All manner of nerdery is mainstream now (not just in baseball) and, frankly, that’s the future I want.

As usual, the STEM lens can be applied to looking at the past, the present, or the future (which will be the subject of this summer’s issue of The National Pastime: The Future According to Baseball, edited by Marty Resnick and me). I divided this issue’s articles into those that re-evaluate historical data and those that could be applied to understanding of the game today. In the former group Gary Belleville ranks no-hitters, while Cam Gibson explores the alternative universe in which the teams with the highest Pythagorean winning average rather than the best record are the winners. Jay Wigley extends the research begun by David W. Smith of Retrosheet two decades ago asking “Do batters learn during a game?” to now look at whether hitters from the Deadball Era learned during the course of a game as well. And Doug Jordan once again finds a unique angle to look back at past greats, this time at the seemingly anomalous “black swan”: a player who had never won an award before breaking out with an MVP season.

The latter section of research articles, meanwhile, is both the most academic and possibly of the most interest to professionals in the sport. A team of undergrads at Columbia University headed by Anthony Montes explores optimizing outfield positioning, a team of professors and researchers just northeast of them in Connecticut, headed by Paul Canavan, tests out a new form of full-body analysis using a body suit with embedded sensors rather than the camera-based motion-capture systems more commonly in use for biomechanical analysis. And another undergrad, Samuel Borgemenke, looks at how great players make championships teams … and how championship teams make great players. Come to think of it, Sam’s article relates back to the theme of the first section, about heroes and star-making … and so it goes, around and around.

I hope this issue is a home run.

To learn more about contributing to a future SABR publication, click here.