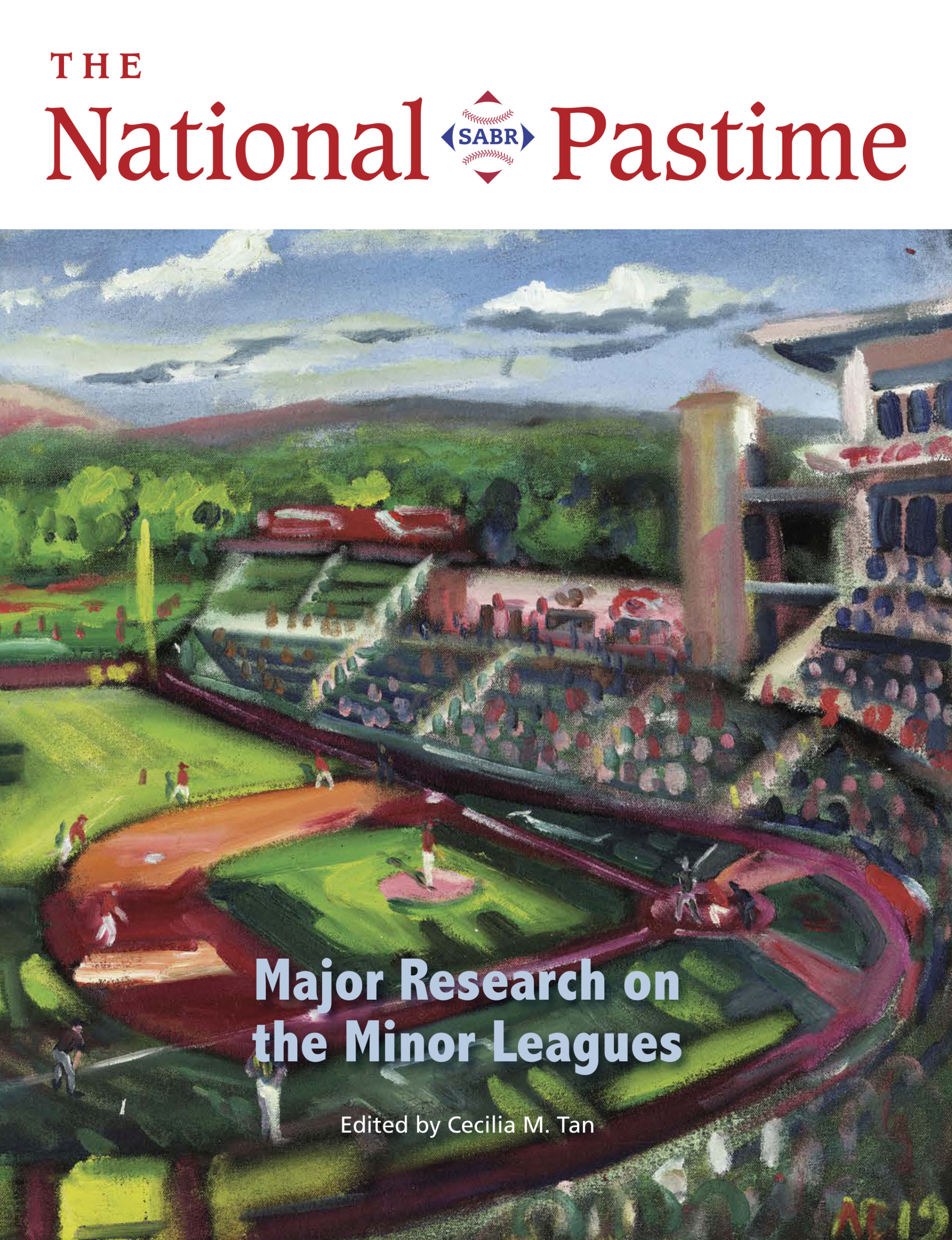 I follow a photographer on Twitter with the handle “Abandoned America,” whose oeuvre includes many asylums, resort hotels and schools, dotting the landscape of the continental US, mapping the ebbs of communities and commerce. It didn’t occur to me until I sat down to write this, though, that I’ve yet to see a ballpark in the Abandoned America feed.1

But I’ve seen the ballparks myself, scattered across the landscape. There are many reasons why a baseball diamond and its grandstand might be abandoned. Maybe a bigger, better ballpark was built. But maybe the team folded when they couldn’t make ends meet. Or their entire league did. Maybe a boomtown went bust. Or the team up and moved to another part of the country. Maybe they lost their affiliation with a big-league club. Or maybe the grandstand burned down and sank the entire business endeavor. Throughout the tales from non-major-league history published in this volume of The National Pastime, there are examples of every one of those scenarios.

I saw more than one abandoned minor league ballpark when I took a research trip through the American South in 2003. I had been a SABR member about a year, and I had written to SABR members all across the Carolinas, Georgia, and Florida asking them for baseball history landmarks along my route. My first stop, Fayetteville, was the site of Babe Ruth’s first home run as a professional. The ballpark was long gone: it had been located on public land that was eventually given over to government buildings, but there was a commemorative plaque, at least.

The first historic site I visited where the ballpark still stood was the old Durham Athletic Park (DAP), where Bull Durham was filmed, which SABR member Cliff Gardner took me to see. At the time, the contemporary Bulls had moved into a brilliant HOK-designed stadium confusingly named Durham Bulls Athletic Park (DBAP). As I blogged at the time, DAP was rather run down. “Paint was peeling everywhere we looked, and we kept discovering storage sheds and closets piled with odd old garbage dating back to 1998, when the Durham Dragons women’s professional fastpitch team played there. [We even] discovered the shed known as ‘Baseball Corner,’ a souvenir stand where Baseball America’s ‘office’ was housed in its infancy. The floor was rotted through.” DAP is still standing today. The powers that be in Durham keep finding tenants for the place: nowadays the North Carolina Central University baseball team.

I also stopped at Greensboro’s World War Memorial Stadium, which had been the home of a Yankees minor league affiliate, and which once had been the site where hundreds of seats from the old Yankee Stadium had been installed for re-use. The last pro baseball tenant left in 2004, but the team of the land-grant university that owns the site—North Carolina A&T—makes its home there, still.

SABR member Jim Tessmer showed me around Luther Williams Field in Macon, Georgia. The previous season it had been home to the Macon Braves, but they had flown the coop and left the ballpark—and Jim—behind. This was a classic 1929 gem, full of bricks, and quirks, and tin—with a press box built hanging from the roof. The place stood empty until the Macon Peaches played there in 2003, and a collegiate summer league team took up residence in 2007. Since then the classic nature of the place has been well recognized by TV and movie productions that have been filmed there: Brockmire, Trouble with the Curve, and the Jackie Robinson biopic 42.

The site of Ponce De Leon Park in Atlanta was my next stop. This was the legendary site on which Babe Ruth hit a home run into a giant magnolia tree on the steep train-track-topped embankment that ran along right and center fields in the park. The magnolia tree is still there. The ballpark is not.

At the time I visited, the tree was behind the loading dock of a Borders bookstore. Nowadays, the entire Borders bookstore chain is gone, too. After visiting the tree, I also went to tour what was then the Braves’ “new” ballpark, the Olympic stadium that was built in the mid-1990s with the plan that it would be converted to pro baseball after the Games ended. Right outside the new park, in the parking lot, you could see the one vestige of the old Fulton County Stadium that was preserved: the section of the wall where Hank Aaron’s 715th home run left the park. The Braves have since abandoned this area of Atlanta for a new, upscale neighborhood in Cobb County, but Georgia State University has taken over the site and has plans to develop the Aaron monument and incorporate it into a new baseball and softball facility.

The last ballpark on my research trip was Tinker Field, built by Joe Tinker in 1923, when he tried his hand at Florida real estate after his ballplaying days. I saw Tinker Field at the end of its life, when it was just part of the Citrus Bowl complex, when even the high school team that had played there was moving to a new home. The outfield wall was dented by decades of use, the vestiges of old painted-on advertisements still legible. My host, Dillon Thomas, showed me Calvin Griffith’s private box, located atop a groundskeepers outbuilding with a view of the field. Baseball had been played on the site since 1914. Just over 100 years later, after it had fallen into utter disuse and disrepair, the City of Orlando demolished it. In 2018 they added a Tinker Field History Plaza on the site to commemorate the history of baseball (and civil rights) in Orlando.2

Plenty of ballparks don’t receive even that much consideration, nor do the “hometown teams” of non-major-league cities and towns. Sometimes the teams themselves bolt for greener pastures. Other times external forces are at work. In 2020, 42 teams were “contracted” by Major League Baseball, and the fallout from that is still being felt. But despite all the ups and downs that have plagued the minor leagues for more than a hundred years, minor league baseball (including independent, unaffiliated minor leagues) is still a vital part of small-town Americana. It’s one of the reasons I wanted to explore the minor leagues as a theme in this issue of The National Pastime.

The only thing that stays the same in the minor leagues, it seems, is that things are always changing. This issue includes accounts of some teams that were so short-lived, they didn’t even play a full season. We tread some expected ground, with stories of wacky gate attractions, pranks, and traditions, but also some unexpected territory as well: I hadn’t necessarily expected that we’d have not one but two articles about Black ballplayers playing on White teams—something that couldn’t happen in the American or National Leagues at the time. We have tragedy (in Duluth) and triumph (in Buffalo). We even have a smattering of sabermetrics, with a look at park effects and an examination of minor league Triple Crown winners.

If I learned one thing in my travels, it’s that even when a ballpark is gone, sometimes someone puts up some kind of marker so folks will have something to look at to remember what’s gone. A plaque, a sign, a section of wall. This edition of The National Pastime is my marker.