The objective of the research described in this article is to identify those players who merit recognition as “.300 hitters” even though they did not end up with lifetime .300 batting averages. They are among the former members of the prestigious Career .300 Hitters Club—the Emeritus Members.

“At some point in the 1880s,” says John Thorn, MLB’s official historian, “.300 came to be seen as a good barometer of batting skill, as no National League club had batted .300 between 1877 and 1892. The .300 mark survived as a benchmark for good hitters even after the 1894 campaign when NL hitters averaged .309.”1 Nowadays, traditional batting average is not viewed as a strong measure of offensive skill by baseball analysts, but remains a meaningful benchmark for the players themselves.2

The high regard players have for batting .300 has been demonstrated throughout major-league history by players prematurely ending their seasons to preserve their .300 batting averages. During the past 103 major-league seasons, 129 players chose to not play in their team’s final game of the season—or exited the game early—to avoid jeopardizing the coveted .300 mark.3

Among these are 16 Hall of Famers, including Hank Aaron, Ken Griffey Jr., Vladimir Guerrero, Reggie Jackson, Derek Jeter, and David Ortiz. The most recent player to join the “Did Not Play .300 Hitters Fraternity” was Jose Altuve of the 2022 Astros, who, after exiting Houston’s penultimate game early and before sitting out their final game, said, “Obviously it means a lot. I’m just happy because it’s a big number. Hitting .300 means you’re getting on base and helping your team and, in the end, that’s what you play for.”4

Standing outside the clubhouse with lifetime batting averages less than .300 and at least 1500 hits are 445 players, including 18 who played in the 2022 season. Among the outsiders is Mickey Mantle, who expressed the following: “My biggest regret was letting my lifetime [batting] average drop below .300. I always felt I was a .300 hitter, and if I could change one thing, that would be it.”5 As a former member of the Club, The Mick’s relevant batting stats are excellent. The owner of nine full-season .300s, he was a Club member for nearly eight continuous years, from August 20, 1960 (when he collected his 1500th hit), through July 27, 1968, when his 0-for-4 in the first game of the July 28 doubleheader irretrievably reduced his career batting average to a sub-.300.

So, it’s not at all surprising that Mantle also said, “But, god-damn, to think you’re a .300 hitter and you end up at .237 in your last season, then find yourself looking at a .298 average—it made me want to cry.”6 But it seems appropriate to ask, “Does Mantle deserve Emeritus Member status in the Career .300 Hitters Club?” as well as, “Which other former members of the Career .300 Hitters Club should be recognized as Emeritus Members?”

To answer these questions, one first needs to establish the criteria for Emeritus Member status. This, of course, is subjective. There are three fundamental attributes that each Club member has:

(3) Sustained .300 average over many seasons (and enough .300+ seasons with high enough average to offset the sub-.300 seasons) 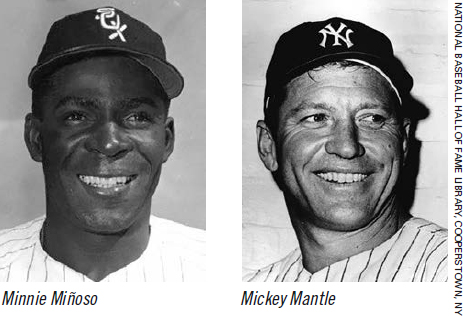 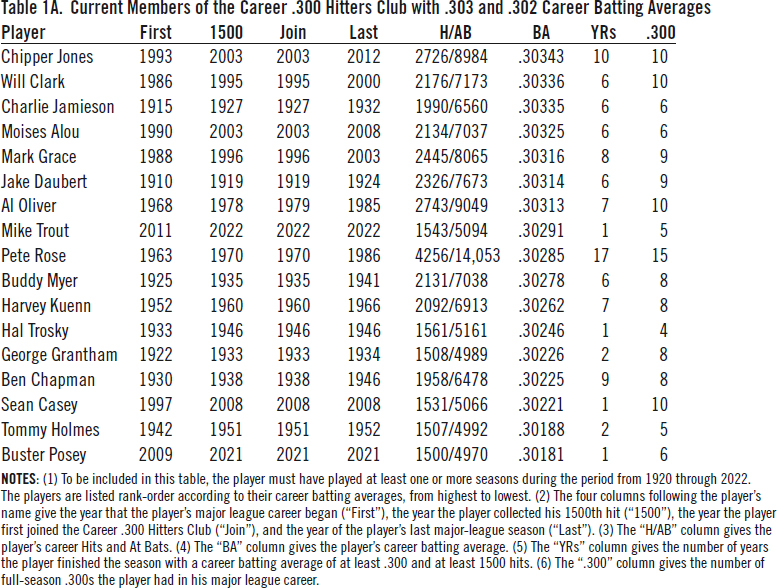 Adhering to criteria specified above, I determined that there are two players who deserve the honor of being Emeritus Members of the Career .300 Hitters Club. A convenient way to present the results is to provide lists of all the former members of the Club according to their career batting averages and highlight the Emeritus Members. Let’s begin with those who finished with a career batting average of .299—just one point shy of the threshold for active membership in the Club. 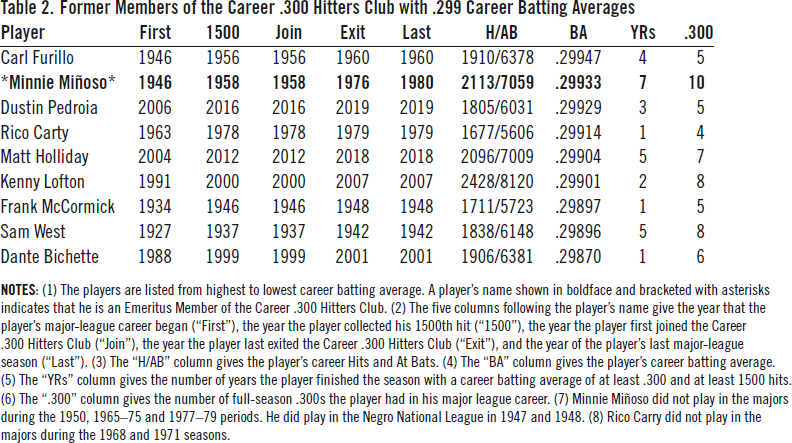 There have been nine players who played during the 1920–2022 period and achieved a career batting average of .299 with at least 1500 hits. Table 2 presents pertinent information for these players, each of whom is a former Club member. Only one of these players attained Emeritus Member status.

Minnie Miñoso is the only .299 former Club member with at least 2,100 hits, at least six season-ending .300s with at least 1500 hits, and at least eight full-season .300 batting averages. Thus he deserves Emeritus Member status in the Career .300 Hitters Club.

His story is especially interesting—it has two beginnings. After playing in the Negro National League during the 1946–48 seasons, he made his American League debut with Cleveland on April 19, 1949. After playing the bulk of the 1949 campaign and all of the 1950 season with San Diego (Cleveland’s AAA farm club), Miñoso returned to the big leagues in 1951 and remained there through mid-July 1964. He played for four teams and fashioned eight .300s—ChiSox (6), Cleveland (2),Cardinals (0), Washington (0).

However, in an effort to achieve the feat of having played in the major leagues for four decades, Miñoso came back—with the Chicago White Sox—for 3 games in September 1976, in which he went 1-for-8, which further lowered his lifetime AL/NL batting average to .29846. His major league career was, apparently, complete. But, then in October 1980, Miñoso extended his career to five decades by playing in two games for the White Sox, going hitless in two at bats. That appeared, again, to be the end giving him a final AL/NL career batting average of .29837. Miñoso passed away March 1, 2015.

This blockbuster decree had a profound effect on Miñoso’s career batting performance—it gave him a new staring point. During his three years in the Negro National League (1946–48) he had compiled a composite batting average of .313 (150-for-480); he had assembled .356 and .344 batting averages in 1947 and 1948, respectively.

Including his NNL stats means that Miñoso actually joined the Career .300 Hitters Club in 1958 and remained a member through the 1964 season—his (revised) career batting average to that point being .29962. Thus, it was not until his venture to be a four-decade player that he was expelled from the Club. Miñoso’s final final-career batting average (assuming no further changes to his official major league record) is .29933. He truly is an Emeritus Member of the esteemed Career .300 Hitters Club.

Mickey Mantle, as shown in Table 3, rightfully deserves the honor of being an Emeritus Member in the esteemed Career .300 Hitters Club. As was the case for several other former Club members, The Mick played for “one more season” (1968) which turned out to be his expulsion season from the Club. At the conclusion of the 1967 season (in which he had batted a career low .245), Mantle’s lifetime batting average stood at .302. And, with his Yankees team having finished last in 1966 and next-to-last in 1967, it might have been a good time for Mantle to hang up his spikes.

However, going into the 1968 season, Mantle had slugged 518 home runs in his career—only three homers fewer than the 521 that Ted Williams had collected and 16 shy of the 534 round trippers amassed by Jimmie Foxx. So, with the carrot of surpassing both Williams and Foxx, Mantle played that “one more season.” Unfortunately, while he did hit 18 homers, giving him a career total of 536 (which, at the time, ranked third all-time, behind Babe Ruth’s 714 and Willie Mays’s 587), he batted just .237, which lowered his career batting average to .298, which, as he would later say, “That was definitely the biggest regret of my career. I had always taken great pride in hitting .300, and I wanted to finish with a .300 average.”8

Another .299 former Club member just missed the threshold for Emeritus Member status—Julio Franco. He had seven full-season .300s, one less than the necessary eight. A few other former Club members also came close to meeting the requirements for Emeritus Member status; each missed because his lifetime batting average was .297 or lower. Tables 4–7 provide the pertinent information for them.

Table 4 (below) lists the eleven former members of the Career .300 Hitters Club who each ended up with a lifetime .297 batting average. Only one of them came close to Emeritus Member status.

Al Kaline had a perspective antithetical to Mantle’s regarding surrendering a lifetime .300 batting average. In a pre-1967 season newspaper article Kaline was quoted as saying, “I hope I can help the team by hitting .300. This is tough to do. It’s getting tougher.”9 Going into the 1967 campaign, Kaline had failed to hit .300 in each of the previous three seasons, causing his career batting average to drop from .309 to .304.

As the 1967 season unfolded, Kaline did achieve his pre-season hope by hitting .308. It turned out to be his last full-season .300 campaign. After four more sub-.300 seasons, Kaline found his career average at .300 (actually .30045). In a pre-1972 season interview, when asked if he thought he could “hold it there,” Kaline responded—“Some great hitters in the game finished up not hitting .300. I’d like to stay up there and I think I can.”10 Then, after having produced a .313 batting average in 1972 (87 hits in 278 at bats), which nudged his career average up to .301, Kaline said this going into the 1973 season: “The only personal goal I really have is to stick around long enough to get 3000 hits. Staying above .300 for a career isn’t really that important because too many good players in the past haven’t.”11 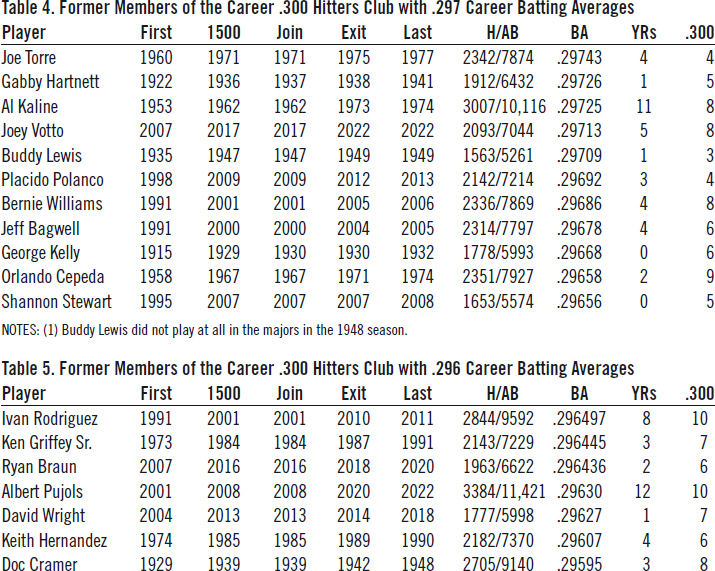 As shown in Table 5, seven former members of the Career .300 Hitters Club finished their major-league careers with .296 batting averages. Two of those former members came close to Emeritus Member status— Ivan Rodriguez and Albert Pujols. Here’s what Pujols opined in May, 2019, a little over a year before he surrendered his lifetime .300 (July 25, 2020): “Definitely!” Pujols exclaimed when asked if .300 meant something to him. “It’s very special to be able to hit .300 in this game, even in the course of a year. It’s not easy. To hit .300 in this game, it’s pretty special. If someone doesn’t care about it, they’re crazy. It’s something they should focus on all the time.”12 It is noted that, thanks to having solid .300s in each of his first ten seasons (2001–10), Pujols had compiled a robust .331 career average at that point. He did not reach .300 in any of his twelve subsequent campaigns (2011–22). In six of those seasons he fashioned sub-.250 batting averages; his composite batting average was nothing-to-brag-about at .261. 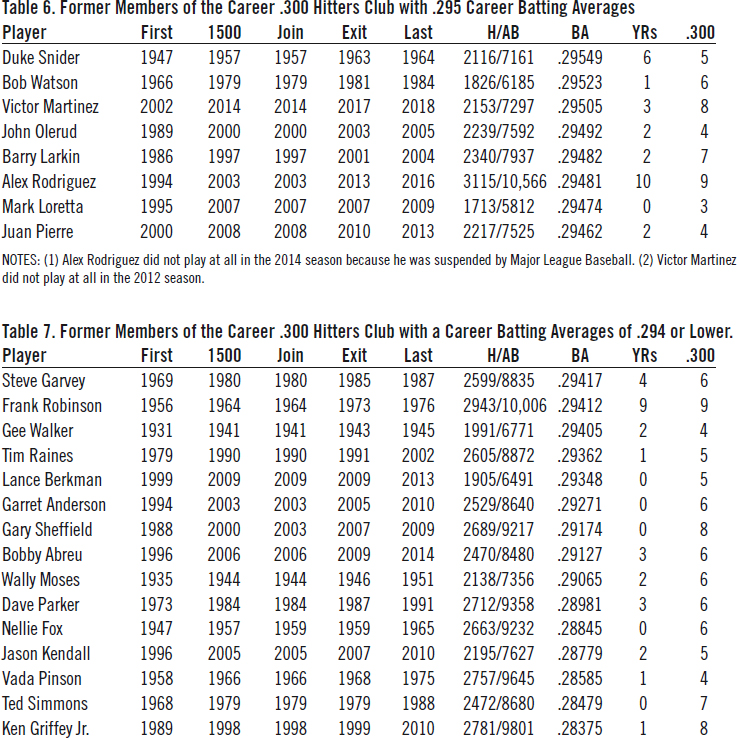 As shown in Table 7, fifteen former members of the Career .300 Hitters Club ended up with batting averages of .294 or lower. Of these, only Frank Robinson came close to attaining Emeritus Member status.

Only two former members of the prestigious Career .300 Hitters Club earned recognition as Emeritus Members—Minnie Miñoso (.299) and Mickey Mantle (.298)—based on the criteria established in accordance with the batting statistics of several current members of the Club (Tables 1A and 1B). Six other former members missed out on Emeritus status as a consequence of their lifetime batting averages being less than .298. The bottom line is this: Even though a .300 batting average is a somewhat arbitrary threshold (a round number) and in spite of batting average having been proven to be not the best measure of a hitter’s contributions to his team’s offense, a .300 batting average is nonetheless an achievement that does carry historical significance and is still highly regarded today. Miñoso and Mantle truly are Emeritus Members of the venerable Career .300 Hitters Club.

HERM KRABBENHOFT is a retired organic chemist. He has been a SABR member since 1981. His baseball research efforts have included ascertaining the complete details of major league triple plays (in collaboration with Jim Smith and Steve Boren), ultimate grand slam homers, minor league double-duty diamondeers, quasi cycles, determining accurate RBI records for Lou Gehrig, Babe Ruth, and Hank Greenberg, and ascertaining the uniform numbers for Detroit Tigers players. Herm’s baseball articles have been published in several SABR committee newsletters, including The Inside Game, 19th Century Notes, and By The Numbers. He is the author of Leadoff Batters (published by McFarland in 2001). Krabbenhoft has been the recipient of thee SABR Baseball Research Awards (1992, 1996, and 2013).

It is a pleasure to acknowledge Baseball-Reference and Retrosheet for their baseball-research-enabling websites. I also wish to express my gratitude to the following for their very insightful and constructive comments, suggestions, and guidance: the anonymous reviewers of the submitted manuscript, as well as editor Cecilia Tan, Gary Stone, Patrick Todgham, and Jeff Robbins.