This article was written by Fred Lieb

This article was published in the 1973 Baseball Research Journal 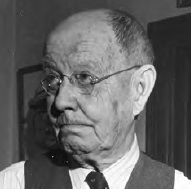 Baseball already has had some interesting centennials. In 1939, they celebrated the first 100 years of baseball as an American sport and institution. It was the year the game’s shrine in Cooperstown, N.Y. was officially dedicated. In 1969, they celebrated the golden anniversary of baseball’s first all-pro team, the unbeaten Cincinnati Reds in 1869, with appropriate functions and ceremonies in Washington, Cincinnati, New York and other cities.

In 1973, baseball comes up with another centennial, the 100th birthday of Ernest John (Ernie) Lanigan, early historian of the Hall of Fame, who was king of baseball figures, statistics, records, names and birth-places of players, events and incidents, both ordinary and extraordinary. He was born in Chicago January 4, 1873, and died in Philadelphia on February 6, 1962.

SABR, the Society for American Baseball Research, may well consider the beloved Ernie Lanigan as its patron saint or guardian angel. No man, living or dead, did as much for baseball research as the diligent, untiring, ever-searching ol’ Ernie.

Damon Runyon, a brilliant baseball writer in the New York press box at the Polo Grounds, New York, in the early part of this century, once referred to Ernie as the “Figger Filbert.” I am sure Ernie never cared for this cognomen. As author of the book, The Baseball Cyclopedia, he referred to himself as the “Fearless Writer.” But I feel Damon meant Ernie no harm. Lanigan actually was a nut on baseball statistics, and chased down any odd item on baseball with the zeal of a scientist coming up with a new plant, bug, million-year old human bone, or any early caveman’s artifact.

My early New York baseball writing career was closely associated with that of Ernie Lanigan, as I succeeded him as baseball editor of the New York Press in 1911. The Press gave more attention and space to baseball than any of its competitors. It was Lanigan of the Press who was kind enough to teach me how to score, and make out a box score, and some of the tricks of successful metropolitan writing.

However, one must confess that Lanigan was an odd character as a top echelon baseball man. After he spent some two weeks with me in the Giants’ and old New York Highlanders’ press boxes, helping me with my chores and scores, I never again saw him in a major league ball park. I believe he did attend one or two games, and when he worked for the International League as statistician and publicist, he attended a few of their games.

“I really don’t care much about baseball, or looking at ball games, major or minor,” be once confided to me.

“All my interest in baseball is in its statistics.   I want to know something about every major league ball player, not only what he is hitting, but his full name with all middle names and initials, where they were born, and where they now live.”

He came by his interest in baseball and its statistics, and his writing ability, quite naturally as his mother, Bertha Spink Lanigan, was a sister of the famous Spink brothers, all born on an island off the shore of Quebec, Canada. First to come to the States was William (Willie) Spink, early St. Louis baseball writer and personal telegraph operator to President U.S. Grant. He was followed by Albert H. Spink, who started The Sporting News in St. Louis in 1886, and eventually by Charles C. Spink, early South Dakota homesteader, who soon became one of the key men in The Sporting News picture. Ernie was a first cousin to J.G. Taylor Spink, for many years the dynamic publisher of The Sporting News, and a second cousin of C.C. Johnson Spink, the present publisher and editor.

Mrs. Berthan Spink Lanigan, was an early editor of the Ladies Home Journal. A younger brother of Ernie, Harold (Hal) was a successful baseball writer and sports editor in both St. Louis and New York.

Ernest never was a robust man, and most of his life he battled with some form of illness, especially pulmonary. Several times he had to go to health sanitariums or live in high altitudes. Despite his health problems, and frequent indulgence in Bourbon and Rye whiskey, he lived to be 89, and had his fine mental faculties and splendid memory, especially of things concerning baseball, right to the end.

He changed jobs frequently, partly because of health and partly because of his independence and rugged individuality. He left the New York Press in 1911 to take a position of assistant to Edward G. Barrow, then the new strong president of the International League. No matter what high positions Barrow later attained, he always demanded almost servile service from his subordinates. Ernie couldn’t live, breath or function at his best under such a boss. During the latter part of the 1911 season, Ernie wasn’t fired from his International League, nor did he officially quit. He just went out to lunch one day, and never returned.

In his frequent moves, Lanigan served stints as baseball editor of the Cleveland Leader, press representative and auditor of the Syracuse Stars, and business manager of the St. Louis Cardinals’ farm clubs in Dayton, Ohio, and Fort Wayne, Indiana. Eventually, he gravitated back to the International League office when Frank Shaughnessy served as President.

Big names in the world of politics, sports, or the theater meant little to Lanigan; he was strong in his likes, also in his dislikes. On one of Commissioner K.M. Landis’ periodic trips to New York, he stopped at the International League offices, then in Gotham. He peered for a moment or two at an elderly man seated behind an outside desk, and asked “Didn’t I meet you in Florida?”

The elderly gentleman in the outer office was Ernie Lanigan. “No, you didn’t see me in Florida, or anywhere else,” he said through pursed lips. “Because I have carefully avoided meeting you.”  Judge Landis’ face turned livid. In his long career as a Federal judge, and then as the No. 1 man of baseball, no one ever had spoken to him like that. He started to say something, though better of it and went into the office of the International League President. In the 1920s, when there was a running feud between Landis and Byron Ban Johnson, first American League President, Ernie’s sympathies were entirely with the fighting Ban.

Lanigan worked for his uncles, Al and Charley Spink, of the St. Louis Sporting News, when he was only a teenager. His contributions to baseball were many. He was on of the originals boosters for a national organization of the major league baseball writers, and even had his then young friend, Sid Mercer, do missionary work for such an association when Sid took the road, writing about the New York Giants. He saw his dreams become reality when the Baseball Writers Association of America was successfully launched in New York in December 1908.

His big gift to the field of baseball statistics is the important Runs Batted In (RBI) column of today. He and his New York Press sports editor, Jim Price, used to enter “Runs Batted In”, and “base-runners thrown out by catcher” in the lower part of the Press box-scores of New York teams. They appeared in no other big city newspapers. Eventually, Lanigan induced John Heydler, then secretary of the National League, to include these figures in his official averages. Later, they were taken up by the Associated Press in their nation-wide coverage of big league games.

In 1946, Shaughnessy loaned Lanigan to the Hall of Fame at Cooperstown, N.Y. Although he took a strong distaste to his title as “Curator of the Museum”, Lanigan grew roots in the pretty town on Lake Otsego, and stayed there for the remainder of his working days. After a few years, he was able to turn over active direction of the museum, and he concentrated his efforts as historian of the Hall of Fame. He continued in this post until old age caused him to retire. Lee Allen succeeded him as Hall of Fame historian in 1959.

While baseball statistics were Ernie Lanigan’s first love, he did have a keen interest in orchestral music. Among his many jobs, he was treasurer and press representative for the Philadelphia Symphony Orchestra in 1902-04. But, even when Ernie was getting his pay and groceries from this great orchestra, he still had time to dabble with baseball “facts and figgers.”  If the tuba player had a cousin in Oshkosh who played third base for the Cardinals, Ernie would not rest until he had the payer’s middle name, something on his antecedents, and whether he had been a pitcher before he switched to the hot corner.

As Judge Landis once said of Ernie’s cousin, Taylor Spink, “There never could be another like him. After God made him, he threw away the mold.” So the same is true of Ernest John Lanigan, and for the same reason.

Editor’s note: The primary source for this recollection was Fred Lieb’s extraordinary memory and mind. Lieb wrote a two-page obituary for Lanigan in the February 14, 1962 edition of The Sporting News, and much of the material in this piece can be found there.