This article was written by James K. Skipper Jr.

This article was published in the 1984 Baseball Research Journal

George Herman Ruth is probably the most well known of all American baseball players. He may also have been the best. There has never been another player who had such an effect on the sport. He revolutionized it from a pitcher’s game to a hitter’s game, and it has remained that way ever since. Ruth has become a symbol of baseball, if not American sports in general. As such, the nickname “Babe” has become synonymous with Ruth. However, there were players nicknamed “Babe” before Ruth and after Ruth, and “Babe” was not the only nickname by which he was known.

There is evidence that the nickname “Babe” not only predated Ruth, but may have had a meaning independent of him, but for which he fit the mold. The Dictionary of American Slang contains the following definition:

Babe (Capital B) A large fat man; esp., a large fat baseball player; used as a nickname. As irony, and because many fat men have baby faces. Reinforced by Babe Ruth, the baseball star of the 1920s who was a heavy set man.

The accompanying table lists the height and weight of major league baseball players nicknamed “Babe.” With the exception of Ernest Phelps, a catcher who compiled a career average of .310 in 11 seasons and was also called “Blimp,” none of the other baseball “Babes” would seem to fit the “fat man” stereotype. In fact, one of the first players called “Babe,” Daniel Sherman, was only five feet, six inches tall and weighed just 145 pounds. His only appearance in the majors (half a cup of coffee) was a stint of one-third of an inning as a pitcher for the Chicago entry in the Federal League in 1914. He walked two batters and was charged with the loss. After Ruth’s prime, however, there is an indication that “Babe” is associated with big men. Clifford Bloodgood wrote in “Diamond Drafts” in Baseball Magazine in 1935:

Without apparent rhyme or reason a “Babe” has to swarm over the scales far better than two hundred pounds and stand well over six feet in his socks. Without these qualifications a baseball “Babe” is an illegitimate son according to the baseball writer’s union.

Again, as can be seen from the accompanying table, most but not all of the players nicknamed “Babe” after Ruth’s prime were in fact six feet tall or better, and at least approximated 200 pounds. Yet it was neither height nor weight which accounts for Ruth’s nickname “Babe,” although it does figure in the version of the origin of the monicker given to him by Boston Red Sox players.

There have been numerous explanations about Ruth’s nickname. In Baseball Nicknames 1870-1946, Tom Shea reported that Ruth received the nickname early in life when he was at St. Mary’s Industrial School in Baltimore. The bigger boys refused to let him play in their sports events because he was “just a babe.” In a slightly different version, noted baseball historian Fred Lieb recounted that Ruth received the nickname at age seven shortly after coming to St. Mary’s. He was teased by the older boys and blubbered and so they called him “Babe.” Lieb pointed out that this incident was denied by a man who attended the school while Ruth was there.

Lieb also put forth still another story. When Jack Dunn signed Ruth to a contract in 1914, he was still a minor. Dunn was required to obtain a court order to get him out of St. Mary’s. This led to rumors that Dunn had legally adopted Ruth. It was at this time that Baltimore sports writers began calling him “Babe.”

None of these accounts is exactly the way Ruth supposedly remembered it. In the volume Babe Ruth’s Own Book Of Baseball published in 1928, it is stated:

It’s a funny thing, incidentally, how many times a year I get letters asking me how I got my nickname. Some of the newspaper boys made a pretty good yarn out of it one time. They said that when I was a little kid I always wanted to play ball with bigger boys, and when they wouldn’t let me play I’d cry and howl until I had the whole neighborhood disturbed. The big boys according to his story nicknamed me “Baby” because I cried so much, then shortened it to Babe, as kids will. It’s a shame to spoil a good yarn like that, but as a matter of fact the story is all wrong. A man named Steinam, who was coach of the Baltimore Orioles when I joined the club in 1914, gave me the nickname. The first day I reported at the clubhouse he said, ” Well, here’s Jack’s newest Babe now.”

However, the incident is recalled slightly differently in The Babe Ruth Story (as told to Bob Considine) published in 1948. It allegedly happened the first time Ruth took the field at spring training in Fayetteville, Ark., in 1914.

On that day, Dunn practically led me by the hand from the dressing room to the pitcher’s box. I was as proud of my Orioles uniform as I had been of my long pants. Maybe I showed that pride in my face and the way I walked.

“Look at Dunnie and his new babe,” one of the older players yelled.

That started it I guess. But the clincher came a few days later.

Ruth became fascinated with the elevator at the team’s hotel. After bribing the operator to let him run it, he nearly decapitated himself by closing the doors with his head sticking out.

Dunnie bawled me out until the stuffings ran out of me, and what he didn’t say to me the others said for him. But finally one of them took pity on me, shook his head and said: “You’re just a babe in the woods.” After that they called me babe.

Which of these accounts is the “true” version? Perhaps we will never know. Normally one would be more likely to accept the first-person account over secondary sources. But this is complicated in Ruth’s case. Ruth had two versions of how he got his nickname – or did he? According to Lieb, Bill Slocum of the New York Morning American was the ghost-writer for Babe Ruth’s Own Book of Baseball and Bob Considine did the writing for The Babe Ruth Story. Were the accounts Ruth’s or theirs? Ruth had a notoriously poor memory, especially for names. Lieb commented: “Ruth probably had a low I.Q. Certainly he couldn’t remember names, so with everyone it was `Hello, Kid’ no matter what the person’s age.” It is quite possible that Ruth did not remember how he got the nickname “Babe” and simply agreed to versions suggested to him. Doubtless the origin of his nickname was of little consequence to Ruth. The reader will have to use his own judgment about the authenticity of the various accounts.

Be that as it may, “Babe” was not the only nickname used for Ruth by fellow ball players. According to Baseball for the Love of It by Anthony Conner, when Ruth first reported to the Red Sox in 1914 he was 19 years old, six feet two inches tall and weighed 198 pounds. He had a slim waist, huge biceps and absolutely no manners or social graces. His teammates called him “The Big Baboon.” A few years later when he was playing for the New York Yankees and the whole world knew him as “Babe,” this was the nickname used by his closest player associates. They used a takeoff on

George. Historian Lee Allen recalled: “Babe Ruth’s intimates on the Yankees usually referred to him as Jidge, a nickname which never caught on with the public.” Lieb also mentions the use of “Jidge” by Ruth’s close friends. However, in Ruth’s Own Book of Baseball the nickname is spelled “Jedge!”

To the members of the Yankee ball club I’m “Jedge.” That’s a name Benny Bengough (Yankee catcher) tacked on me two or three seasons ago, and it has stuck.

Few of the other players nicknamed “Babe” had distinguished careers. For example, Ellsworth “Babe” Dahlgren is probably better known as the person who replaced Lou Gehrig at the end of his 2,130-consecutive-game streak on May 2, 1939, than for any of his own heroics. Dahlgren was a hefty, hard-swinging righthander.

Many “Babes” spent only a short time in the major leagues. Such was the case of Jay Towne, one of the first two players to carry the “Babe” tag. He caught 12 games for the Chicago American League entry in 1906. Towne hailed from Coon Rapids, Ia. where as Shea put it, “Corn was tall and so was he.” Supposedly he was a “Babe in the woods.”

Another player made a brief appearance in the same year, and it was the start of an illustrious career. His name was Charles “Babe” Adams, and he deserves to be recognized as baseball’s original “Babe.” As a rookie pitcher with pennant-winning Pittsburgh in 1909, he won 12 games and lost three. He was the fourth starter on the club’s pitching staff. During the World Series the first three starters did not win a game, but “Babe” Adams wrote his name into the record book by winning three. He shut out Detroit in the deciding seventh game. Over his 19-year career he compiled a 194-140 won-lost record with an ERA of 2.76. Adams received his nickname while playing for Louisville in 1908. Women fans used to yell “Oh you Babe” when he was on the mound. It referred to his good looks and, according to Shea, was the 1908 equivalent of “Hubba Hubba.”

Herman received his nickname while playing first base for Edmonton in the Western Canada League in the early 1920s. A coach, Dan Howley, knew a heavyweight fighter in Canada named “Babe” Herman and insisted on calling Floyd “Babe” even though he had been previously called “Lefty.” According to Herman, the sportswriter picked it up immediately. Joseph McBride in High and Inside reported that when Herman was a rookie in 1926 Ty Cobb remarked to him that the 45-ounce bats he was using were even heavier than those that Ruth swung. Herman replied that if he used heavier bats he would hit the ball farther than Ruth. From then on the players also picked up the nickname of “Babe.”

Werner Birrer was the last major league player to carry the nickname of “Babe.” In a four-inning relief stint as a rookie pitcher for the Detroit Tigers on July 19, 1955, he hit a pair of three-run homers in two times at the plate. Thus the nickname “Babe.” Ironically, they were the only home runs and runs batted in for his major league career which ended with the Los Angeles Dodgers in 1958. Thus it has been a quarter century since baseball has had a “Babe.” Like so many nicknames, “Babe” may be a relic of the past. We know there will never be another Ruth, but one wonders if there will ever be another “Babe.”

One final note is in order. Robert Peterson in his book Only the Ball Was White provides an “All Time Register” of players from the echelon of the Negro Leagues. Of the more than 2,500 players listed, only one, Spencer Davis, had the nickname of “Babe.” He played shortstop and was a manager for the New York Black Yankees and Winston-Salem Giants, 1941-1948. 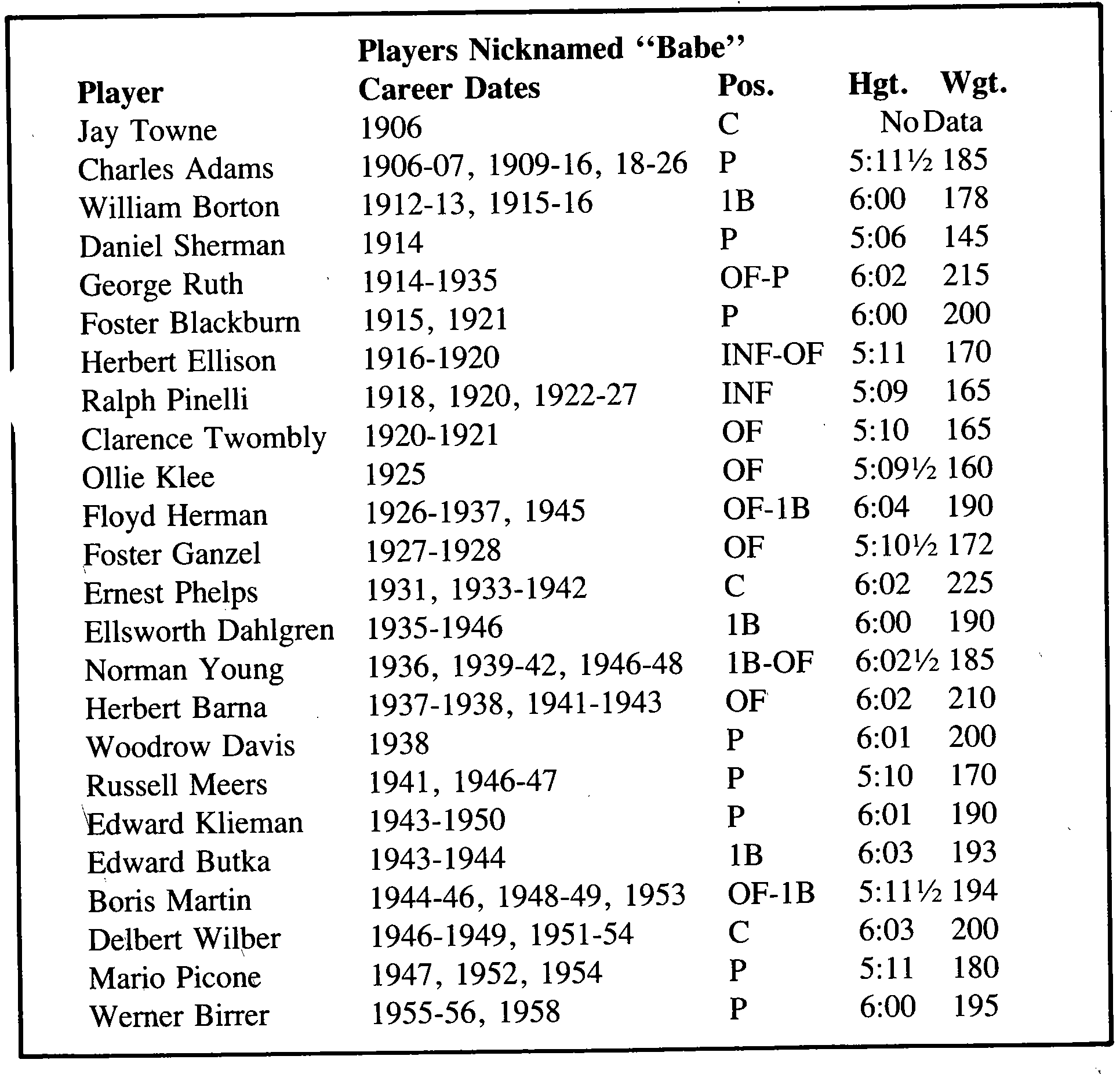