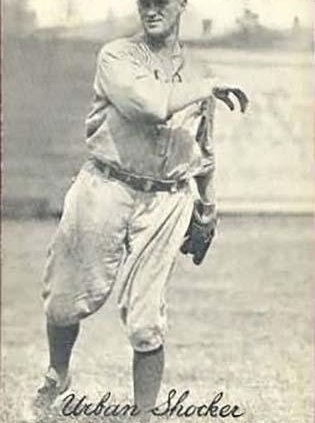 This article was written by Steve Steinberg

This article was originally published in SABR’s The National Pastime, No. 20 (2000). 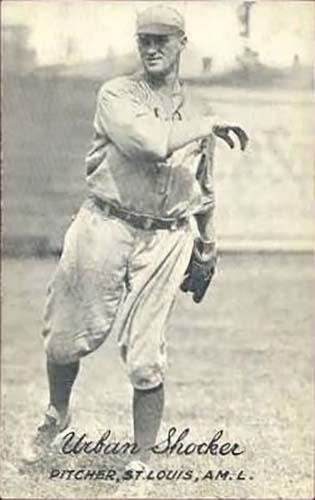 Urban Shocker is one of baseball’s forgotten stars, even though he was one of the American League’s dominant pitchers in the 1920’s. He won 156 games in that decade, most with the lowly St. Louis Browns, despite the fact that his last decision was in 1927. After going 37-17 for the great 1926-1927 New York Yankees, Shocker died of heart disease in 1928.

Even more forgotten is Shocker’s challenge of the reserve system and his fight for free agency, a matter that became the cause celebre of the 1923 winter baseball meetings. Ultimately, Shocker did not win his bid for freedom, but he shook the very foundation of baseball. The incident precipitated a showdown between Commissioner Landis and the owners of baseball that almost ended Landis’s reign a mere three years after it began.

The triggering event was straightforward, though unusual in the days when the ballplayer’s wife’s role was in the home. On the final St. Louis Browns road trip in September 1923, Shocker wanted to take his wife along. Shocker’s nephew Roger Shockcor (the original spelling of Urban’s last name, before he changed it to simplify matters for reporters) remembered that Urban’s wife Irene loved to be “a part of the action.” The response of the Browns was swift and clear: They had a well-established rule that wives did not go on road trips. (Some teams, like the Giants, Reds, and White Sox, allowed wives on trips, while others, like the Pirates and Tigers, did not.1 When Shocker did not head east, he was fined $1,000 and suspended from the team.

The Sporting News was very much on the side of management, saying the rule was “justified by experience, and for the general good of a team on the road.”2 TSN editorial writer John Sheridan wrote that one of the great values of baseball was “no outsider can help a baseball player in this game of rugged individualism.” The logic was a bit unclear, as the St. Louis Post-Dispatch wrote, “A tactical blunder appears to have been made, since the presence of a player’s wife on a trip certainly should contribute to his good conduct, if he is the least inclined to waywardness.”3

Shocker felt his personal liberty had been infringed upon, since the team was interfering with his family affairs. On September 27, he asked to be declared a free agent, since the team had voided his contract by suspending him. The New York Times wrote on December 4, just before the winter meetings began, “stripped of its legal verbiage, the case simmered down to the question of whether a club had the right to discipline a player as it saw fit.”

Commissioner Kenesaw Mountain Landis was the wild card in this dispute once Shocker appealed the case to his office. Hired by the owners in 1920 after the Black Sox Scandal (in which the Chicago White Sox “threw” the 1919 World Series), Landis had shown indications that he could not be counted on to rule in the owners’ favor in disputes with players. During his long reign, he would surprise the owners with his natural affinity for players in their contract struggles with management.

AP reported on December 30 that Landis was reluctant to take a position that might cause the players to feel they were, in effect, “baseball slaves,” as was asserted in the Federal League suit against organized Baseball.4 Years later, Leo Durocher said, “He was always on the side of the ball player. He had no use for the owners at all.”5 Maverick owner Bill Veeck wrote that Landis admonished players, “Don’t go to those owners if you get into trouble, come to me. I’m your friend. They’re no good.” During the December 1923 meetings, Landis explained his support of the underdog: “When he [the player] comes into court against a club owner, he sometimes is not adequately represented.”6

In November 1923, The Sporting News was clearly worried. “One can never tell what stand Landis will take. He is quite capable of assuming arbitrary jurisdiction in the Shocker case.” Landis did just that, which TSN declared, would cause “the fur to fly.”7 Shocker then strongly intimated he’d go to court if the case went against him, challenging the Reserve Rule, which would open the door for a legal fight that might shake baseball to its foundation.

In the meantime, the new manager of the Browns, the great first baseman George Sisler, entertained trade offers for his unhappy player. In the first four years of the Lively Ball Era, Shocker was the winningest pitcher in baseball, going 91-51 (.641) on a team that won only 53% of its games. So it was not surprising that many teams inquired about Shocker. The World, for example, reported that the Yankees offered future Hall of Famer Waite Hoyt. The Yankees had been trying to get Shocker back for years, ever since they traded him in January 1918. The trade, in which Shocker was a last-minute throw-in, was Miller Huggins’ first major action as Yankee manager and one of the few mistakes the Yankees made as they built their powerhouse team.

The backdrop to the Winter Meetings was the ongoing battle between Judge Landis and American League President Ban Johnson. On December 10, the Post-Dispatch headline shouted “American League Reportedly Ready to Withdraw if Landis Decides Shocker Case Against Browns. Man High in the Councils of Organized Baseball Tells Sports Editor Wray that Owners Will Refuse to Accept Verdict in Favor of St. Louis Pitcher.” On December 11, Wray wrote, “Landis is a friend at court for all ball players- and it may cost him his official hand.”8

That very day Landis, ever the tactician, postponed a decision until after the meetings. But he was still on the offensive. On December 12, as the meetings opened Landis made a preemptive move, denouncing Johnson and threatening “any time you [the owners] assert by your votes that I am not wanted, that moment I will tear up that contract.”9

The AL owners quickly fell into line behind Landis, giving him a sweeping victory. It was Yankee owner Colonel Jacob Ruppert who rose in support of Landis and rallied the owners. “Ruppert’s speech kept Landis in baseball,” declared the headline in the World. Johnson’s biographer, Eugene Murdock, felt that this showdown was the turning point in Landis’ baseball career, when he truly solidified his power base.10

On January 18, 1924, just days before Landis’s hearing (which had been postponed to late January), Urban Shocker surprisingly withdrew his plea to be declared a free agent and had his case against the club dismissed. Red Sox President Bob Quinn, who was the Browns’ business manager earlier in the 1923 season, helped persuade Shocker to accept the settlement. Credit was also given to new Browns’ Manager George Sisler, whose close friendship with Shocker played a role. Before the winter meetings ended, Sisler had telegrammed Browns Business Manager Bill Friel that he wanted to keep Shocker, and the Browns then took Shocker off the trading block. When asked if Shocker would remain a Brown, Ball said, “That is strictly up to George Sisler. There will be absolutely no interference from the business office.”11

But the key figure behind the scenes was AL President Ban Johnson. On January 23, 1924, the Globe-Democrat reported that Johnson, acting as duly appointed proxy by the Browns, signed Shocker to a 1924 contract. On January 31, 1924, The Sporting News reported that he had intervened with Quinn, to avert a situation that might have forced the league to walk away from Landis and operate independently. Attorneys for both Shocker and the Browns said report of the settlement was news to them. Even owner Phil Ball, a close friend and ardent supporter of the league president, said he knew nothing, but he had received a wire from Johnson that the case had been settled. Ball’s support for Johnson was boundless. In 1926 he would tell the New York Sun, “I am with Ban Johnson, first, last, and always.”12

The Post-Dispatch reported that Johnson protected Ball’s feelings by letting the fine stand and protected Shocker by substantially raising his salary to reimburse him for the $1,000 fine (January 23, 1924). Exactly what financial incentives were given to Shocker to settle can only be speculated upon. But he said he was completely satisfied and treated better than he anticipated. “If everyone had friends like him [Bob Quinn], there wouldn’t be any enemies in this world. Manager Sisler can count on me to pitch my head off once the season starts.”13

Baseball owners breathed a collective sigh of relief. Back on December 4, Irving Vaughn of the Chicago Tribune, saw the explosiveness of this case: “more than a mere dispute between player and club. It involves points that threaten the whole structure of organized baseball, and Landis realizes this.” George Daley, sports editor of the World, wrote that Landis was saved “from making a decision on a most delicate question.” The Sporting News summarized the closure this way: “The temperamental and probably ill-advised player had refused to admit the errors of his ways, to take his punishment. Shocker escaped the full consequences of his rank insubordination, but better that than the possible – nay probable – consequences of a decision by Commissioner Landis subversive of club rights and league sovereignty.”14

Just how Landis would have ruled in this fundamental case can only be surmised, but his “tendency to give the players a chance” almost precipitated fireworks “that would make the Last Days of Pompeii look like a wet match.”15 It is not surprising that during these winter meetings, all 16 baseball owners made a secret agreement to incorporate into standard player contracts a clause that required the player to abide by all present and future team rules, for the purpose of discipline.16

The Baseball Hall of Fame is starting the huge process of cataloguing Commissioner Landis’s papers. When “the Shocker file” is found, it will shed more light on this case.