This article was written by Todd Peterson 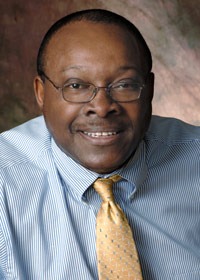 James Edward Brunson III (1954- ) is one of the very few historians who can rightfully claim to have written the definitive work on their subject. His 1,393-page, three-volume work, Black Baseball, 1858-1900: A Comprehensive Record of the Teams, Players, Managers, Owners and Umpires (2019), is not only one of the very first books on nineteenth-century Black baseball, but the tome’s sheer encyclopedic range and depth makes it very unlikely to ever be surpassed. In 2021, SABR deemed Brunson’s opus to be one of the 50 greatest baseball books of the last 50 years.

A native of Chicago, Brunson is a lifelong White Sox fan. His favorite players growing up included Don Buford, Roberto Clemente, Willie Mays, and Sandy Koufax, and his top baseball moment remains the Sox’s 2005 World Series sweep over the Astros. He was raised on Chicago’s South Side in the Bronzeville neighborhood and, like many other youngsters, played baseball, football, and basketball. James attended Du Sable High School, and later graduated from Northern Illinois University in DeKalb, Illinois, where he received Bachelor of Fine Arts, Master of Arts, and Master of Fine Arts Degrees in studio painting. He then matriculated to the University of Chicago, eventually earning both a Master of Arts Degree and a PhD in Art History.

Brunson’s journey down the Black baseball rabbit hole began in 1985, while the esteemed watercolorist was working on a suite of 57 paintings called “Renaissance,” five of which were dedicated to the Negro Leagues. Poring over microfilm while researching the series, Brunson came across the tragic story of Isaac Carter, a ballplayer for the St. Louis Black Stockings, who was shot and killed in 1884, while being reportedly mistaken for a burglar. His interest piqued, Brunson photocopied the newspaper page and filed it away. A year later, during his young family’s annual Memorial Day pilgrimage to St. Louis, Brunson dug deeper into the incident at the St. Louis Public Library on Olive Street, eerily located near the site of Carter’s death. Brunson photocopied everything he could about the Black Stockings, filling up two three-inch thick notebooks, and after coming across more Black St. Louis squads, began collecting their stories as well. Realizing that very few books covered the history of the Black Stockings or their peers, and that nobody else seemed to be pursuing the subject, Brunson decided to do it himself.

Over the course of the next 35 years, whether at university conferences or family vacations, the historian carved out time in his busy schedule to visit microfilm rooms, sometimes taking weekend trips to libraries throughout the United States. When he began his project, neither the Internet nor digital newspaper repositories existed. Leaning into his obsession, Brunson developed an individual philosophy that any new piece of information was worth garnering, travel costs be damned. The historian’s personal credo also demanded that no part of a newspaper was to be left unexamined. His organizational approach consisted of photocopying relevant newspaper articles, then jotting down information on numerous legal pads and composition notebooks, using multi-colored ink pens to differentiate between dates, teams, and states.

For Brunson, the main challenge was making sense of it all. He began synthesizing his research and publishing his findings in periodicals and journals such as NINE, Base Ball, and Black Ball. For his first book, The Early Image of Black Baseball: Race and Representation in the Popular Press, 1871-1890 (2009), Brunson critically examined how early Black ball was (mis)represented in the mainstream culture of the day; via inflammatory articles, racist cartoons, and “true crime” pictorials that mocked and demonized African Americans. The book also explored how the “colored sporting fraternity” was portrayed by a burgeoning Black press and, perhaps most significantly, documented the devastating impact White blackface minstrelsy and dialect had on Black culture and baseball.

Greatly aided by the emergence of online genealogical and historical newspaper databases—and with the encouragement of editor Gary Mitchem—Brunson began working in earnest on Black Baseball in 2011. Leaving no stone unturned (or seemingly no newspaper unread), the master historian crammed his three-volume set with over 1,300 team histories and 9,000 player biographies, as well as lists of African American umpires, manager/owners, and ball-playing families. Upon its publication, Black Baseball exponentially exploded the knowledge base of the early Black game, with Brunson detailing over 1,600 team rosters alone. (The previous high number for published nineteenth-century Black lineups was 63.) By finding and tracing the paths of players as they moved from one club to another, Brunson demonstrated how sophisticated and widespread (42 states and the District of Columbia boasted squads) early Black baseball was.

In 2011 Brunson was selected by MLB to serve on the Baseball Origins Committee, whose 12 members (including such heavyweights as John Thorn, Ken Burns, George Will, and Doris Kearns Goodwin) were tasked with researching the inception, growth, and evolution of early baseball. For his Herculean efforts on Black Baseball, Brunson received the 2019 Robert Peterson Recognition Award by the Jerry Malloy Negro Leagues Conference, and the 2020 Ray and Pat Brown Award for Best Edited Reference/Primary Source Work in Popular and American Culture by the Popular Culture Association.

James married his high-school sweetheart Kathleen and they remained together for nearly 50 years until her untimely death in 2018. Even though Kathleen passed away before the publication of Brunson’s masterwork, her encouragement certainly made it possible. (Sometimes, however, in the middle of the night, she would yell at the author to get off the computer and come to bed.) Before his retirement in 2012, Brunson was employed by Northern Illinois University for 37 years, teaching art history and drawing, while also serving as the university vice-president of Diversity and Equity in Student Affairs and Enrollment Management. James and Kathleen raised two daughters: Takkara, who teaches Cuban History, the African Diaspora, and gender studies at Texas A&M, and Tamerit, who is a visual rehabilitation specialist at the Center for Sight and Hearing in Rockford. Brunson is very devoted to his two granddaughters, Amaya and Efoma, and continues to write about the cultural history of Black baseball from his home in DeKalb, Illinois.