“A Card Collection is a magic carpet that takes you away from work-a-day cares to havens of relaxing quietude where you can relive the pleasures and adventures of a past day—brought to life in vivid picture and prose.” — Jefferson R. Burdick, from the introduction to his American Card Catalog (1960 edition) 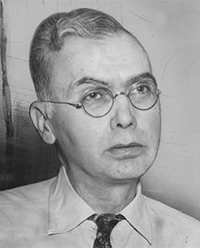 Jefferson R. Burdick (1900–63) was a pioneer card collector whose invented classifications still govern the hobby; he donated his enormous collection to the Metropolitan Museum of Art, where it remains one of the most popular destinations for researchers. He created The American Card Catalog, the bible of the hobby, and tribute is paid to his lifelong work whenever anyone brings up T-206 or N-162 or other codes common in card collecting. Burdick was “a collector’s collector,” said Freyda Spira, the Met’s assistant curator in the drawings and prints department. “He didn’t collect cards because of their value but because of his interest in history.” It is this approach to the visual aspect of baseball that makes him worthy of SABR’s Henry Chadwick Award.

As Burdick wrote in 1948, he regarded his life’s work as “a national collection belonging to everybody.” His quiet joys were not in chasing value or celebrity, or in mere accumulation, but in his research and in the legacy he consciously built, despite crippling arthritis, to his dying days. Metropolitan Museum curator A. Hyatt Mayor had exhibited a career interest in printed ephemera as a window onto culture; this is what prompted him to accept Burdick’s offer of the collection in 1947.

Burdick was born in 1900 on a farm in Central Square, New York, 25 miles north of Syracuse. Like other youngsters of that era, he asked his father to purchase various brands of cigarettes so he could get different cards, according to an interview he gave to The Syracuse Herald-American in 1955. Though he went on to get a two-year degree in 1922 and stopped collecting for a while, once he was diagnosed with arthritis, his decreased mobility reawakened his interest in cards. “A card collection is a magic carpet,” he wrote in 1939, “that takes you away from work-a-day cares to havens of relaxing quietude where you can relive the pleasures and adventures of a past day — brought to life in vivid picture and prose.” It was in this year that Burdick issued the first number of The United States Card Collectors Catalog, later retitled The American Card Catalog. He handed editorship of the publication to Charles R. Bray in 1949.

Burdick was a bachelor whose massive collection overwhelmed the museum’s curators. When his arthritis and heart issues forced him to retire from his job assembling electrical parts at the Croue-Hinds plant in 1959, he relocated to an apartment at Madison Avenue and 26th Street in Manhattan. This move permitted his regular attendance at the Met to catalog and mount his collection, a particularly daunting task for a man who knew his days were numbered.

A co-worker at Crouse-Hinds and Burdick’s best friend, John DeFlores, recalled that though Burdick’s apartment was near the ballpark of the Syracuse Chiefs, he may never have seen a game. His arthritis was so severe that he could not drive a car; proudly, he insisted on walking without a cane, but his range was limited. DeFlores said that Burdick’s arthritis was so severe that he couldn’t open his mouth wide enough to insert a ball of hard candy. “All he was interested in was his cards,” his friend recalled. “That was his life’s work.”

On January 10, 1963, as Mayor would later describe it, Burdick “twisted himself into his overcoat” and said goodbye, adding, “I shan’t be back.” He admitted himself to New York’s University Hospital the very next day and died two months later. His sister had died, and he left no descendants.

As Sean Peter Kirst wrote in Burdick’s hometown paper, the Syracuse Post-Standard, thirty years later: “When the lifetime bachelor died in New York City in 1963, neither of the daily newspapers in Syracuse ran an obituary. For 30 years after Burdick’s passing, his staggering collection of 300,000 postcards, hat cards, tobacco cards, military cards and baseball cards was kept locked away in New York’s Metropolitan Museum of Art, available for viewing only on special request.”

That is no longer the case. A splendid selection of Burdick’s cards may be viewed online at MetMuseum.org.