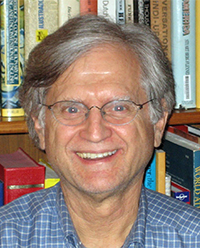 Larry McCray created the vast and invaluable Protoball Project, to help researchers and writers locate and refine primary data on the evolution and spread of ball play from ancient times up to 1870, just before the first professional baseball organization began and variation among rules and styles began to narrow. Many hands may have made light the work, but it is to Larry that we must credit the now widespread understanding of how our national pastime sprouted and flowered.

Enlisting the efforts of scores of other “diggers,” as they are termed on the site, Protoball Project has provided a data-driven view of how baseball in North America evolved and spread beyond predecessor games played in Europe. Larry served as Guest Editor of the landmark special Protoball issue of Base Ball: A Journal of the Early Game, featuring more than thirty articles on this long neglected and little understood area. Larry has served on the editorial board of Base Ball since its inception in 2007.

Though McCray was named to MLB’s Special Origins Committee in 2011, his work has continued apace outside the confines of that group as well as within. Likewise, he has chaired SABR’s Origins Research Committee for many years, and attracted new diggers as well as interested readers. Truly, however, Protoball (mirrored in more primitive form at MLB.com) stands alone as one of our game’s great research feats.

Larry founded and edited the site’s newsletter, “Next Destin’d Post.” If you get the reference in the title, and somehow are not a regular congregant, get thee posthaste to Protoball.org.

Larry’s more conventional baseball credentials include his days as a self-described left fielder and banjo hitter at Ithaca High School, followed by three years as leadoff hitter for the Union College Club of Schenectady, NY. He has been a Boston Red Sox fan since the painful season of 1986.

And despite the suspicions of many who are reading this, there is more to life than baseball. “There comes a time in every man’s life,” Casey Stengel said, “and I’ve had plenty of ’em.” So has Larry McCray. After graduating from Union College with a BA and BEE (1965) and being awarded a Fulbright scholarship for 1967–68 in India, he received his Ph.D from the Massachusetts Institute of Technology in 1974. His dissertation, “The Politics of Regulation,” was awarded the APSA’s E.E. Schattschneider Prize as the best dissertation in American government and politics for 1974. He now helps teach a graduate course in science policy at MIT.

In what may be titled “real life,” he lives in Lexington, Massachusetts with his estimable wife Alexa, no academic slouch herself. She is Director of the Informatics Training Program, Department of Biomedical Informatics as a professor at Harvard Medical School.

From 1981 to 1998 Larry was project director and program director of the National Academy of Sciences/National Research Council. As project director, he conducted many evaluative studies, primarily reviewing policy programs of the U.S government that have significant scientific content. As study director, he drafted significant portions of committee reports on the decision-making on carcinogens, risk assessment and risk communications, science and national security, national science policy, and graduate education. The 1983 report, Risk Assessment in the Federal Government: Managing the Process, is often credited as the source of a new paradigm for federal risk regulation.

His later academic and policy accomplishments are too numerous to cite in the present context but Larry epitomizes, in this writer’s view, the perfect profile of a top baseball researcher: one who makes his mark elsewhere, and then continues to inform his baseball studies with the intellectual curiosity and perspective he has gathered along the way.

As long as I have known Larry, he has had the “guilty pleasure” of conducting informal research on everyday life in the year 1827. Why? one might ask. SABR members will be quick to respond, Why not?