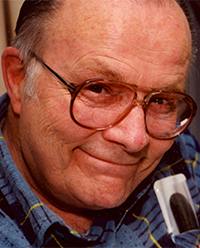 Robert W. Peterson (1925–2006) was a newspaper writer, a freelance journalist, and the author of several books on sports and contemporary news events. His primary contribution to baseball was the seminal Only the Ball Was White, a 1970 book on the Negro Leagues, which remained a foundation for the next few decades of scholarship in the field. “The seismic impact of his book shook the baseball world like the archaeological discovery of the Lucy fossil in 1974,” Larry Lester would later write. “Its aftershocks lifted Black baseball from the abyss with untold stories and unheard voices.”

Born and raised in Warren, a town in northwest Pennsylvania, Peterson’s childhood was filled with ballplaying of all kinds. Besides playing himself, once or twice a summer he was able to watch barnstorming Black teams take on the best local adults, even shagging balls for the visitors during batting practice. He long recalled a mammoth home run hit by Josh Gibson in Warren in 1939.

After a stint in the US Navy at the end of World War II (playing for the Navy Torpedo Shop team on his base), in 1950 he graduated from Upsala College in East Orange, New Jersey. He played college baseball, and during the summer Peterson went back to Warren and played for a semi-pro team, mainly as a catcher. In 1948 his club took on a couple of independent Black teams, including the Indianapolis Clowns.

After college Peterson spent 16 years as a reporter and editor for several small newspapers and newspaper chains, before working as an editor at the New York World-Telegram and The Sun in 1962. When it folded four years later, he became a fulltime freelancer, which he remained for the rest of his life. Soon after deciding on this career path, inspired by his memories of watching Black players in his youth, he turned to the research on what became his master work.

Peterson spent the summer of 1967 researching the long history of Black baseball, focusing on the sporting press and Black newspapers, covering 1885 through the early 1950s, creating league and team rosters. He spent another several months driving around the Northeast interviewing surviving ballplayers or their widows. He turned in his manuscript in late 1969, and it was published the following May. It was hardly a bestseller — he believed he sold about 8,000 copies in hardcover, and he found no interest in a paperback until 1984.

Peterson wrote thoughtfully of the two sides of the Negro Leagues’ story: “Negro baseball was at once heroic and tawdry, a gladsome thing and a blot on America’s conscience.” Although the leagues had been going strong only 25 years earlier, by 1970 they were hardly talked about even among famous alumni. Things slowly began to change. Satchel Paige was inducted into the National Baseball Hall of Fame in 1971, and many others have followed. Today we have many great books on the leagues and players, an accomplished and prolific SABR committee, and an annual Negro Leagues conference. Peterson’s book was the start of all of it.

Peterson married Marguerite (Peggy, also a newspaper reporter) in 1954, and they raised two children, Thomas and Margaret, during a happy union that lasted until his death. Early on they moved as Bob’s career required it, but eventually settled in Ramsey, New Jersey, and resided there for 40 years.

Peterson wrote several more books, about the origins of professional football and basketball, and the Boy Scouts, that relied on the same combination of newspaper research and oral history that had made Only the Ball was White such a critical success. He wrote for many national magazines and was a regular contributor to Scouting and Boys’ Life for many years. Although he did not do much baseball research after his book came out, Peterson was an active participant in SABR’s Negro Leagues Committee, and attended several Jerry Malloy Conferences. At the very first conference — in Harrisburg in 1998 — Peterson was the keynote speaker. At the time of his death, he was a member of the Special Committee on the Negro Leagues that elected 17 people to the Baseball Hall of Fame in 2006. He cast his votes in absentia but died just days before the committee votes were totaled.