This article was published in the Spring 2018 Baseball Research Journal 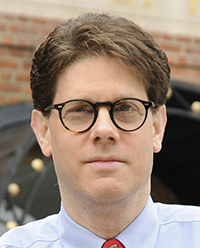 Tom Shieber (1964 – ) was still a boy in St. Louis when he embarked on his journey as a baseball researcher, creating his own (index card) database of player photo identifications from every baseball book he could find. It took a few years, and a few detours, before the rest of us began to benefit from Tom’s passion for photo identification, among many other baseball research interests.

Tom graduated from Reed College (Portland, OR) in 1986 with a B.A. in physics, and then spent 12 years working as a telescope technician and computer programmer at Mt. Wilson Observatory, in the San Gabriel Mountains north of Pasadena, California. Although any intellectual pursuit — especially one requiring such attention to detail — is bound to ready a person for other challenges, Tom admits that there is not much direct overlap between solar physics and baseball.

Having joined SABR in 1981 while still in high school, he made his most significant contribution to the organization in 1994 when he founded the Pictorial History Committee. Tom had kept up his interest in photography and had become quite expert at it, though he envisioned his committee to also encompass drawings, illustrations, and moving pictures. Tom chaired the committee and wrote its newsletter for several years, and in 1997 he co-authored SABR’s picture-filled Baseball for the Fun of It.

His well-earned skepticism helped lead to the debunking of the presumed subjects or origin of many well-known photographs, including a famous daguerreotype widely assumed to be of the 1840s Knickerbocker club. For his long contribution to this field, Tom received the George Michael SABR Pictorial History Award in 2016.

Tom also developed an interest in the origins and development of the game. His article on “The Evolution of The Baseball Diamond” was the cover story for SABR’s Baseball Research Journal in 1994, and his presentation on the evolution of the pitcher’s mound won him the award for the best oral presentation at the 1994 SABR convention.

In 1998 Tom joined the staff of the National Baseball Hall of Fame and Museum as their webmaster in the early days of their Internet presence, and a few years later he became the museum’s Curator of New Media, bringing his understanding of modern technology to the museum’s more traditional program. In 2006 he was named Senior Curator, and now has the responsibility for curating exhibits for both the 250,000 annual visitors to Cooperstown, and also for its exhibits that have traveled throughout the country.

He has curated numerous temporary or permanent exhibits, including Olympic Baseball, One for the Books: Baseball Records and the Stories behind Them, Babe Ruth: His Life and Legend, and many more. He helped create the Hall’s first traveling exhibit, Baseball as America, which toured 15 cities between 2002 and 2008, and was lead curator for the follow-on We are Baseball, and Picturing America’s Pastime, a traveling exhibit of photography. Under Tom’s watch, the Hall also began producing interactive and online content, including Dressed to the Nines: A History of the Baseball Uniform.

Tom’s research ethos is best on display at his excellent personal blog at Baseball Researcher, which deals with whatever Tom happens to be interested in at the moment. This is usually, though not always, a deep dive into illustrations, photography, or film. Tom often points out that his research is intended as personal amusement, and writes as if he is not expecting anyone else to care, but of course we do. Whether he is peering at baseball tobacco cards lingering in the background of an obscure photograph on the Library of Congress digital archive, or considering a few baseball-related items in the John F. Kennedy Presidential Library, or examining the long-held story that Gary Cooper’s baseball scenes in Pride of the Yankees were reversed to accommodate the right-handed Cooper, the reader is taken on an entertaining ride while unknowingly, step-by-step, sitting in on a master class in baseball research determination and care. His story on Pride of the Yankees, wryly entitled “The Pride of the Seeknay,” received SABR’s McFarland Research Award in 2014.

Tom makes his home in Cooperstown, with his wife Liane Hirabayashi and their daughter Natalie. His contributions to baseball research, via his employment at the Hall of Fame, his presence at SABR meetings, or the delightful wanderings of his curious and fertile mind, are very much in their prime and sure to enrich us more in the years ahead.