This article was written by Saul Wisnia

They were the youngest team in the major leagues. Yet when members of the 1967 Red Sox gathered in their clubhouse during the pennant race to discuss how to break up the bonus that would come their way with a World Series berth, they decided to vote a full share, about $5,500, to someone who hadn’t had a single at-bat for the club all season: a kid named Jimmy.

They were the youngest team in the major leagues, filled with guys who were under 25 years old and making considerably less than $20,000 a year. Yet when members of the 1967 Red Sox gathered in their clubhouse during the pennant race to discuss how to break up the bonus that would come their way with a World Series berth, they decided to vote a full share — about $5,500 — to someone who hadn’t had a single at-bat for the club all season:

Even rookies on the Boston team were well aware of the team’s relationship with its official charity — the Jimmy Fund of the Children’s Cancer Research Foundation (CCRF), today Dana-Farber Cancer Institute. The name “Jimmy” was a pseudonym given to one of Institute founder Sidney Farber, MD’s young patients to protect his privacy, and came to represent all youngsters with the disease.

Owner Tom Yawkey had banned advertising from Fenway Park around 1950, with the only exception being a Jimmy Fund billboard above the grandstands in right field. Yawkey had accepted responsibility for promoting the charity from Boston Braves owner Lou Perini (whose team had helped found it) after the Braves left town in 1953, and he took the role seriously. By ’67 Yawkey was on the Board of Directors for the CCRF and making sure Red Sox broadcasters spread the word about its research and treatment efforts during each game.

“Those game announcements prompted fans to send in contributions and sponsor dances, pancake breakfasts, and hundreds of other fundraising efforts,” Mike Andrews, a rookie second baseman for the club in ’67 and longtime chairman of the Jimmy Fund, recalled 40 years later. “Things just snowballed from there.”

Too many kids who developed cancer back in the 1960s never made it back to the Little League field like the youngster portrayed on the Fenway billboard, however, so players were asked to do what they could to keep spirits high and generate fundraising dollars for the cause. They complied, meeting with young patients before games and attending events in the community when time allowed.

Nobody did more than the great Ted Williams, and when the Splendid Splinter retired, his left-field successor Carl Yastrzemski also became a leading Jimmy Fund spokesman. It was Yaz who suggested that the team honor all children fighting cancer with a portion of their championship winnings, and the vote was unanimous — “Jimmy” would get his cut.

Nearly a half-century later he is still getting it, as the Red Sox and Jimmy Fund maintain their strong bond. Together they raise millions of dollars each year for cancer research and treatment at Dana-Farber, which now focuses on adult as well as pediatric patients.

SAUL WISNIA was born a Tony C. homer from Fenway Park 10 days before the Impossible Dream began there, and now works 100 yards from Yawkey Way as senior publications editor for Dana-Farber Cancer Institute. A former sports correspondent for the Washington Post and feature writer for the Boston Herald, he has written or coauthored numerous books on baseball and other subjects. A SABR-ite since 1992 and a founding member of the Boston Braves Historical Association, Wisnia lives in Newton with his children, Jason and Rachel, and more memorabilia than his wife, Michelle, knows about. 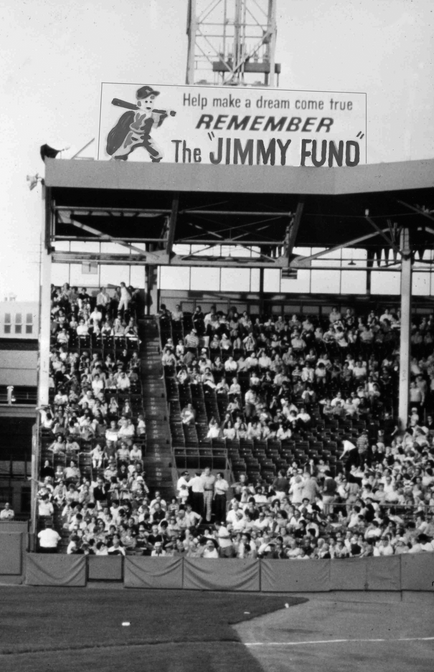 The Jimmy Fund billboard in Fenway Park’s right field, for decades the only advertising sign permitted inside the ballpark. (BOSTON HERALD)