This article was written by John J. Burbridge Jr. 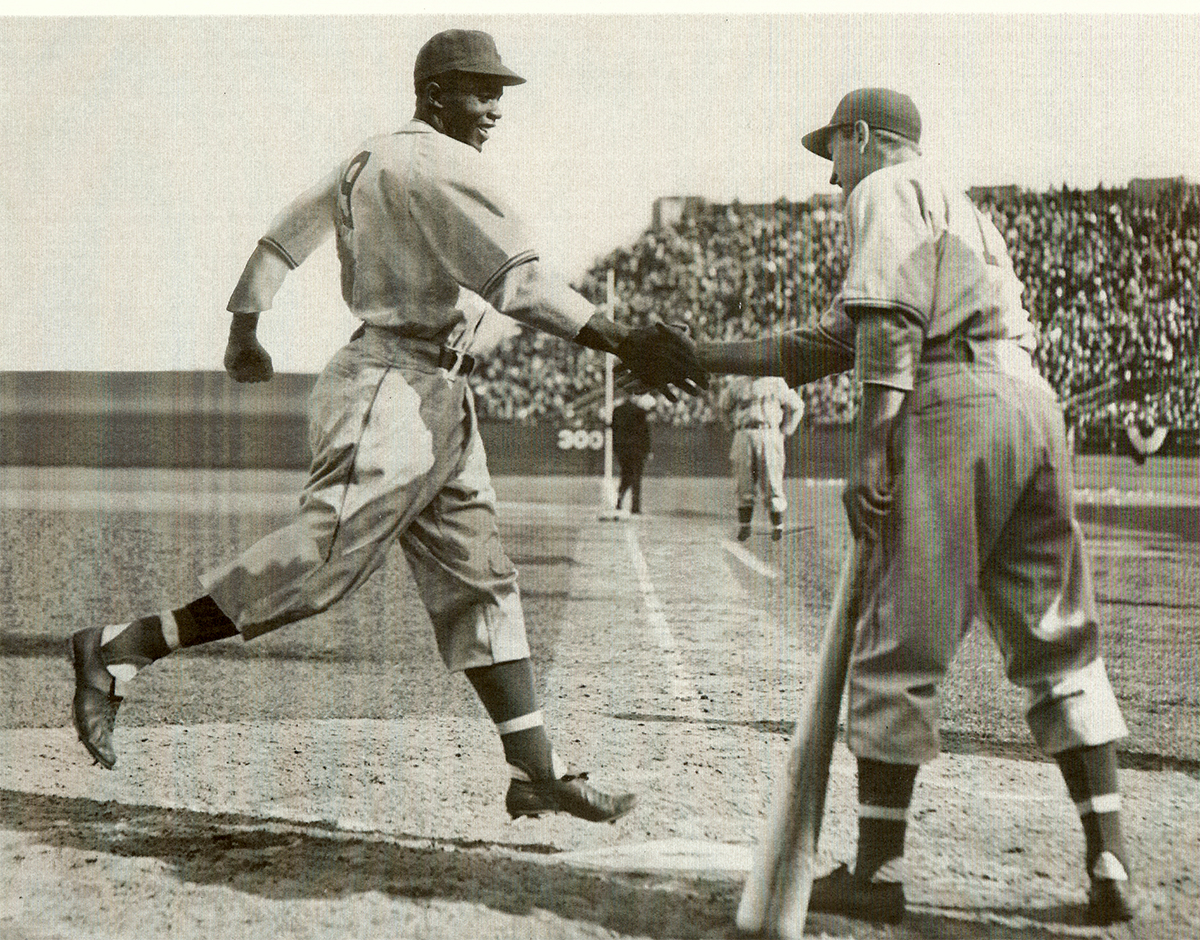 In 1946 as a member of the Montreal Royals, Jackie Robinson played his first game in Organized Baseball at Jersey City’s Roosevelt Stadium. It was a memorable occasion as Jersey City gave him a hero’s welcome. Mayor Frank Hague choreographed the pregame ceremony while Jackie did his bit during the game. In 1956 Jackie returned to Jersey City, but now he was a member of the Brooklyn Dodgers and not the fans’ favorite. As a result, he was jeered.

Jersey City, New Jersey’s second largest city, is directly across the river from lower Manhattan. In 1917 Frank Hague became the mayor. Like most big-city bosses, Hague exerted considerable control over most matters pertinent to the city. He also played a major role in the Democratic Party at both the state and national levels. As a major supporter of Franklin Delano Roosevelt, Hague had over 120,000 Jersey residents support a Roosevelt visit to the Jersey shore in the 1932 presidential campaign.1

Hague also created a kickback scheme for municipal workers which was termed “Rice Pudding Day.”2 He also received illegal funds from the city’s numbers racket.3 As a result, Hague accumulated significant wealth, allowing him to have penthouse apartments in both Jersey City and Manhattan and homes on the Jersey Shore and Florida, all on a salary that never exceeded $8,500 a year.4

While corrupt, Hague maintained a certain degree of popularity with the citizenry by providing basic services. For example, free medical care was provided for Jersey City residents at the Jersey City Medical Center.5 He also promoted public education, aligned himself with the Roman Catholic Church, and supported law enforcement. As a result, new schools were built, women couldn’t frequent bars, Norman Thomas, a prominent socialist, was not allowed to speak, and New York gangsters were not welcome.6

Hague also realized the need to provide Jersey City with baseball. He was able to secure federal funding in the 1930s to build Roosevelt Stadium, naming it after the president.7 With a seating capacity of 24,500, Jersey City was able in 1937 to attract an International League franchise, the Jersey City Giants, a farm team of the New York Giants. Under Hague’s regime, Opening Day became a holiday for municipal workers and schoolchildren.

JACKIE ROBINSON AND THE MONTREAL ROYALS

Jackie Robinson was a superb athlete who starred in several sports at UCLA. Robinson attracted the attention of Branch Rickey while playing for the Kansas City Monarchs in baseball’s Negro Leagues. Rickey was on a mission to break the color barrier in Organized Baseball and sent Dodgers scout Clyde Sukeforth to observe Robinson playing for Kansas City in Chicago. Sukeforth brought Robinson back to Brooklyn to meet with Rickey, On August 28, 1945, Rickey informed Jackie he would be playing for the Montreal Royals of the International League, a Dodgers farm team, in 1946 and then with the Dodgers.8 With that agreement, Rickey and Robinson made history. The Royals’ first game in the 1946 season was scheduled against the Jersey City Giants in Jersey City’s Roosevelt Stadium.

As usual, Mayor Hague went all out, printing 52,000 tickets for Robinson’s debut on April 18. Obviously, not everyone who bought a ticket came to the game given the seating capacity of Roosevelt Stadium but many stood. Schools were closed to celebrate the occasion. The official paid attendance was 51,873.

Hague also orchestrated the pregame festivities, which are best described by Jimmy Breslin:

At 2:30 the fans were thrilled by a marching band that came in from a right-field gate and played Take Me Out to the Ball Game. Everyone bellowed in song.

Next, a gate in center field opened to reveal what appeared to be the mayor being burned at the stake. The hot sunlight exploding on the diamond stickpin in his tie enveloped Hague in a champagne-colored flame. He was a magnificent sight. Blue-gray eyes sparkled under a spanking new hat atop his bald head. He had on a dark blue double-breasted suit that was just out of the hands of a fine tailor. The crowd stilled for the national anthem. Then Hague marched across the new sod to his box seat behind first base. He greeted Branch Rickey and other notables and then sat in glory.9

When Robinson was announced playing second base, the crowd cheered mightily. Were they thrilled to see the debut of the first Black player in Organized Baseball? Probably not. They realized Hague wanted them to give Jackie a rousing welcome.

Jackie certainly did his part to make the day memorable. Nervous, he grounded out in his first at-bat. His three-run home run in his second at-bat set the stage for the memorable photo of George Shuba shaking his hand as he crossed home plate.10 Robinson also hit three singles, two of them bunts, and stole two bases. In this first game, he displayed his speed and his prowess at bunting that was to mark his career. Jackie had gone 4-for-5 with four RBIs and four runs scored. He had exceeded all expectations, leading the Royals to a 14-1 win. The headline of the Brooklyn Daily Eagle summed up his performance: “Robinson’s Debut a Roaring Success.”11

Jackie returned to Jersey City in 1956. Walter O’Malley, now the owner and president of the Dodgers, wanted a new stadium in Brooklyn. To put pressure on New York City politicians, O’Malley negotiated a contract with Jersey City to play each National League team once in Roosevelt Stadium during both the 1956 and 1957 seasons.12 The first game, in 1956, was against the Philadelphia Phillies on a chilly April afternoon. As his baseball career neared an end, Robinson had become known as a fierce competitor with Dodgers fans loving him – and others not so much. The New York Giants had many fans in Jersey City, given its history as the site of a Giants farm team. Therefore, it was no surprise that on the occasion of this first game in Jersey City, Robinson was jeered along with some other Dodgers. Robinson also contributed an error during the game. After the game, Robinson got into a verbal tirade with a Jersey Journal reporter.13

The fact that Jackie Robinson played and excelled in his first game in Jersey City is a significant event in his career. To commemorate that event, a statue of Jackie has been placed in Journal Square, the major hub for commuter transportation and shopping in the city.14 It is a reminder of Jackie’s legacy in Jersey City.

DR. JOHN J. BURBRIDGE JR. is currently professor emeritus at Elon University, where he was both a dean and professor. He is also an adjunct at York College of Pennsylvania. While at Elon he introduced and taught Baseball and Statistics. He has authored several SABR publications and presented at SABR Conventions, NINE, and the Seymour meetings. He is a lifelong New York Giants baseball fan. The greatest Giants-Dodgers game he attended was a 1-0 Giants victory in Jersey City in 1956. Yes, the Dodgers did play in Jersey City in 1956 and 1957. John can be reached at burbridg@elon.edu.