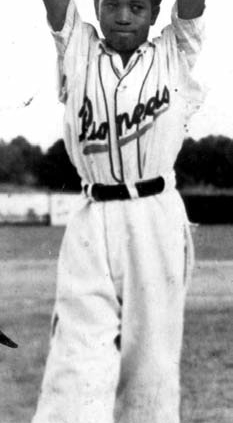 This article was written by Jerry Grillo

One inning of Class D ball made Joe Louis Reliford a baseball immortal. Reliford stepped into the record books on the night of July 19, 1952, when, four months shy of his 13th birthday, he became the youngest person to play in a professional baseball game—simultaneously breaking the racial barrier in the segregated Georgia State League.

But all he wanted to do was earn a few bucks to help his mother, Luronie Gillis Reliford, who was raising 10 children on her own while suffering from rheumatoid arthritis. Joe, her ninth child, was four when his father, Roscoe Reliford, died.

“I had to do something to help her, had to make a little money,” Reliford says. “I was 10 years old when I walked up to the manager of the Fitzgerald Pioneers, Ace Adams, and asked him if I could be their batboy.”

Adams, who’d been an All-Star relief pitcher with the New York Giants during World War II, took one look at the 4-foot-11, 68-pound kid and “did everything he could to discourage me,” Reliford recalls. “He told me how the batboy would have to keep up with all the bats and balls, shine all the players’ shoes, travel with the team. It was a lot of work.”

There was another pro club in Fitzgerald at the time: the Lucky Stars, part of a minor Negro League. They weren’t hiring, but the all-white Pioneers were. Reliford grew up watching both. He says he watched Satchel Paige—a big-leaguer at the time—pitch in Fitzgerald after the major-league campaign.

The Pioneers, meanwhile, restricted their paying African American fans to a section along the right-field line in Blue Gray Park. Reliford remembers perching in trees outside the park to catch glimpses of practice and games.

“I just loved baseball, and I badly needed that job,” Reliford says. “I kept at Mr. Adams and he finally gave in.” Joe remembers that the job paid $68 every two weeks—more than a lot of grown men in South Georgia were making at the time (an article at Baseball-Reference.com claims his biweekly salary was $48).

Reliford was all of 12 years old and in his third season as the Pioneers’ batboy that historic night in 1952. He was the only African American wearing a Fitzgerald uniform and one of the few black people in packed Pilots Field, where the hometown Statesboro Pilots were clobbering their visitors, 13–0, on Elks Night. Both teams, playing well below .500 ball, were battling for fourth place in the eight-team circuit.

“That ballpark was full—5,000, maybe 6,000 people—and they started yelling, ‘put the batboy in,’” Reliford, now 70, says. “Every time they saw me grab a bat, they’d yell like that. They were beating us really bad, and the crowd was just rubbing it in.”

In the top of the eighth inning, Charlie Ridgeway, an infielder who took on managerial duties during some road trips, had a “what the hell” moment. He followed the crowd’s advice. He decided to insert Reliford, by now barely 90 pounds soaking wet, as a pinch hitter for right fielder Ray Nichting, the Pioneers’ best hitter, who was batting around .330 at the time and leading the team in RBI.

“I was having a good year. But we’re getting killed, and Charlie asks me, ‘Do you care if I let Joe bat for you?’ I didn’t have a problem with it,” says Nichting, who now lives near Cincinnati.

Reliford, Nichting, Ridgeway, and the rest of the Pioneers knew something the crowd didn’t: the kid could play. “He was a great athlete. But it was a different time, down in South Georgia.

They thought it was a big joke, this scrawny, young black kid, the batboy,” says Nichting, who played two years of pro ball before getting drafted and deployed to Korea. He fought on Pork Chop Hill and lost a leg. After the war, he redirected his baseball IQ into Little League, twice taking his teams to the World Series.

So Ridgeway, who died in 2008, told the homeplate umpire, Ed Kusick, that he was putting Reliford— who wasn’t on the Fitzgerald roster—into the game, with the understanding that if the kid got a hit, the Pioneers would forfeit the game. Reliford feebly protested, but Ridgeway was insistent.

“I grabbed a bat and went out there to hit, and that really revved up the crowd,” says Reliford, who now lives in Douglas, Georgia, about 30 miles from Fitzgerald. “I’ll never forget it, like this was yesterday. Their pitcher was Curtis White, and I figured he was gonna throw the ball to me like I was a child. I was a child.”

White, working on a two-hitter that night, was Statesboro’s ace and one of the league’s top pitchers that year, posting an ERA of 2.63 with a 16–11 record. He was just as surprised to see the batboy step into the batter’s box as Reliford was to see a fastball zip past him. “He pitched to me like I was Mickey Mantle up there, threw it hard! And I got angry,” Reliford says, laughing. “I thought he was trying to show me up, and I told myself that I’d hit the next one out of the park.” He did hit the next pitch, lining a sharp grounder down the third-base line. But the third baseman backhanded it and threw Reliford out by a step.

In the bottom of the eighth, after White had retired Fitzgerald, Ridgeway told Reliford to grab a glove and go to right field. “I thought he was kidding,” Reliford says. “I told him, ‘Mr. Ridgeway, we can’t do this!’ But he just said, ‘Go ahead, get out there. Everything’s gonna be all right.’”

Better than all right. The Pilots put a man on first with one out in their half of the inning. “The next man hit a grounder to right, a base hit, and the man on first tore around second and went for third,” Reliford recalls. “He must have figured I was just some little kid. Well, I had a rifle arm, and that ball was waiting for him at third.”

The next batter was Harold Shuster, who was working on a 21-game hitting streak but had gone hitless in Statesboro’s offensive onslaught. He would knock in 100 runs that year and lead Statesboro with a .339 batting average. A right-handed hitter, Shuster sliced a drive to deep right, but Reliford flagged it down at the fence. “That kid picked it off like a champion,” Nichting says.

That’s when the place went nuts. The fans came pouring out of the stands toward Reliford. Consider the scene: it’s 1952 in segregated South Georgia, and this 12-year-old kid, still numb after playing an inning of baseball with and against hardened professionals, sees a mob of white people running at him.

“All those white folks came straight at me, and I was so scared I shut my eyes and expected the worst,” Reliford says. “I didn’t know they just wanted to congratulate me.” The fans clapped him on the back and stuffed his pockets full of money. The game was forfeited to Statesboro, and Reliford’s greatest moments on a ball field were behind him. The league suspended Ridgeway, fined him $50, and fired Kusick, the umpire. At the end of the season, the club also dismissed Reliford.

Joe Reliford joined the Lucky Stars for a while, and the team tried to capitalize on his new-found fame as baseball’s youngest professional. He got into a few games, but his career didn’t last. Reliford went on to become a four-star athlete at Monitor High School. He had a number of scholarship offers from historically black colleges and chose to play football at Florida A&M. But he broke his collarbone in practice, ending his playing career.

Reliford says he gave New York a short try after college but only lasted a few months. Otherwise, he’s spent his entire life in South Georgia and has lived in Douglas with his wife Gwendolyn, a schoolteacher, for more than forty years. Reliford worked for years as a jukebox repairman, served as a police officer in Douglas for a time, coached football and basketball at the local high school for African American students, and served a term as city commissioner.

His achievement that hot July night 58 years ago has been recognized in the Guinness Book of World Records and on the Ripley’s Believe It or Not television program. In 1991, his record also earned him inclusion in the National Baseball Museum, which erected a display honoring his accomplishment, and he spun the growing awareness of his record into a book, From Batboy to the Hall of Fame. Reliford says he recently signed a contract with a movie producer for a big screen treatment of his story.

He’s made occasional appearances the past few years, throwing out honorary first pitches at big-league parks and signing autographs. He doesn’t charge a dime for his signature. “My wife might charge you, but I won’t,” Reliford says. “As long as God gives me the strength to write my name, I won’t charge for my autograph.”

The kid who loved baseball, the poor kid who only wanted to make a few bucks to help his family, unwittingly became famous and put his name on a record that probably won’t be broken.

“That one inning of ball made me a celebrity,” Reliford says. “They put me in as kind of a joke, and that joke got turned around and became a blessing for me.”

JERRY GRILLO writes for “Georgia Trend” magazine. He has directed the play “Cobb” and is writing a book about his son Joey, a Special Olympian who plays for the Josh’s Heroes baseball club.

This article is based primarily on telephone interviews with Joe Reliford (May 2009, July 2009, and February 2010) and Ray Nichting (August 2009). Other sources consulted: Georgia Trend (March 2003), Minorleaguebaseball.com, Associated Press (May 1995), JockBio.com, and BaseballReference.com.