This article was written by Ray Gonzalez

Lou Gehrig has usually been described as playing in the shadow of his long-time teammate, Babe Ruth. This was true, particularly when it came to hitting home runs. Gehrig overtook the Babe in home runs on a season basis only when the latter was winding down, and he had no chance to overtake Ruth on a career basis because Lou was struck down at age 35.

Gehrig came out front in runs batted in and in that most dramatic demonstration of RBIs, the grand slam homer, but only in retrospect. Ruth hit 16 of his 714 homers with the bases full and Gehrig hit 23 of his 493. Lou was very proud of the latter record. The main reason was that it took him out of the shadow of the Sultan of Swat in a specialty (home runs) that belonged lock, stock and batrack to Babe Ruth.

This emotion was surprisingly displayed on August 21, 1935, when Lou hit what he thought was his 17th grand slam. The jackpot wallop, which was really his 19th, broke up a 1-1 tie with the Browns in St. Louis and was a drive that went clean out of Sportsman’s Park. But, the thing that pleased Lou most was that it broke the Babe’s record of 16 slams. As noted in the New York Times, the normally modest and methodical slugger couldn’t hold back his elation over that particular wallop.

Actually, Lou had passed the Babe the year before, on July 5, 1934, when he hit a grand slam inside-the-park homer against Washington. If the press had reported this feat factually it would have had more significance because Ruth was still an active player; in fact, he was one of those on base when Gehrig unloaded his 17th grand slam. It was just sloppy reporting. So much space was given to Ruth’s every movement in the period when he played in New York, that other important Yankee accomplishments were neglected.

It is interesting to note how the grand slam slugger of the majors gained his first bit of national attention. He was a high school junior playing for New York City’s School of Commerce in a game against Chicago’s Lane Tech at the National League park of the Cubs, known today as Wrigley Field. The date was June 26, 1920, and the youngster, who had just observed his 17th birthday the week before, came to bat in the eighth inning with the bases loaded and the score tied at 8-8. He belted the ball clean out of Wrigley Field, a schoolboy grand slam in a major league park, winning the game 12-8. Major league scouts sat there with their mouths open, and one newspaper account, although spelling his name Gherrig, referred to him as the schoolboy Babe Ruth.

Gehrig, signed out of Columbia University, got to the majors first in June 1923, but was at Hartford in the Eastern League for most of the next year and one half. He hit his only minor league grand slam on June 17, 1924, in a game at Worcester. He didn’t become a regular with the Yanks until June 1, 1925, which was the date he started his 2130-consecutive-game streak. Later that season, on July 23, he connected for the first grand slam of his major league career. It was in the seventh inning of a game with Washington in Yankee Stadium. Lou had already knocked in 3 runs with a homer and a single, but the Yanks were trailing 6-5. He cleared the sacks with a blast off Firpo Marberry, then baseball’s top relief pitcher. Lou batted fifth in the lineup then, and Aaron Ward, Ruth, and Bob Meusel scored ahead of him in what became a 11-7 victory.

When Gehrig connected for his first grand slam, the career record for bases-loaded homers was six   shared by George Kelly, Rogers Hornsby and Babe Ruth. But it was moving up quickly in that lively ball era. Kelly stopped at eight, Hornsby at 12 and Ruth at 16 in 1934 when Gehrig passed him.

The 1927 season was the one which lifted Gehrig to top flight stature that rivaled even the lofty position of Ruth. Lou’s second grand slam came off Ted Lyons in a game at Comiskey Park on May 7, 1927. The contest was attended by a capacity crowd of 32,000, including Vice President Charles Dawes, and the home run was the first hit into the new rightfield pavilion.

By the middle of the 1927 season, Ruth and Gehrig were demonstrating a one-two punch that was to be unmatched in major league history. On July 4, Washington came to New York with a ten-game winning streak. The holiday twinbill drew a crowd of 74,000, then the largest in baseball history.  The Senators had a solid team which included Sam Rice and Goose Goslin at their peak and Tris Speaker and Walter Johnson as fading stars. Johnson and Al Crowder started the two games, but the Yanks crushed them 12-1 and 21-1 and thereafter made a shambles of the American League pennant race. Gehrig banged a 3-run homer off the Big Train in the first game, and hit a 2-run double and a grand slam homer in the second.

The sixth inning of the 21-1 massacre was described by one New York newspaper reporter in these terms: “At this point there was a loud crash, a sickening thud and the sound of falling bodies. H. Louis Gehrig had hit a homer with the bases loaded. Subsequent details will be spared the gentle reader. Let us draw a curtain over the bloody scene.”

Ruth, who usually batted third and Gehrig fourth, was a frequent tenant on the bases when Lou connected for his big wallops. The two led a massive attack on the pennant-winning Philadelphia Athletics on May 22, 1930, when the Yanks took a twinbill by scores of 10-1 and 20-13. Ruth hit two homers in the first game and one in the second. Gehrig had four hits in five trips in the first game and three homers, one of them a slam, in the second game with Lyn Lary, Ruth, and Tony Lazzeri on base. Lou knocked in eight runs in that game, which tied the AL record.

The Yankee firstsacker again tied the record with eight RBIs in a 14-13 victory over the Red Sox on July 31, 1931, but Ruth contributed little in this slugfest. In the sixth inning, with the bases loaded, Ruth popped up. Gehrig followed with a double, scoring three runs. In the seventh, with the bases filled again, Ruth fanned. On the next pitch from Ed “Bull” Durham, Gehrig drove the ball into the righfield stands at Fenway Park. He had, in three trips, two doubles and a homer good for eight runs batted in.

Gehrig had another big flourish in late August 193 1 when he knocked in runs in ten consecutive games for a total of 27 RBIs. He hit homers in six consecutive games, three of them grand slams, on August 29, 31, and September 1. To show that Lou didn’t pick on the patsies, he teed off on Lefty Grove, knocking him out of the box for the first time that season on August 29. Grove was almost invincible in 1931 with a 31-4 record.

Other outstanding hurlers, in addition to Grove, Lyons, and Marberry, already mentioned, who suffered the indignities of a Gehrig Grand Slam, included 200-game winners Buck (Later Bobo) Newsom, Earl Whitehill, and Mel Harder, and Al Crowder when he was at the top of his form. Lefty Lloyd Brown was twice his victim, once with Washington and once with Cleveland. Nine of his clouts came off southpaws and 14 off righthanders. Lou hit grand slams at all AL parks, with 11 at Yankee Stadium and 12 on the road. The two at Cleveland were both at League Park.

It is interesting to note that Gehrig knocked in 21 different players off 22 different pitchers on his 23 bases-loaded home runs. Ruth got a free ride 15 times, Earle Combs 10 and Frank Crosetti six. Four times a pitcher was on the sacks ahead of him. The full list is on an accompanying chart, and provides some basis for analysis of Gehrig’s performance.

Why did Lou hit so many more grand slams than his contemporaries? Did the Yankees load up the bases more frequently than other clubs? Probably not; they led all major league clubs in batting only twice in the period 1925-38. The Giants got on base a lot in this period but Mel Ott hit only seven of his 511 homers with the bases loaded. The names of the players who rode home on Gehrig’s grand slams would indicate that they were not challengers for leadership in on-base percentage. Take for example, Mark Koenig, Lyn Lary, Sam Byrd, and Frank Crosetti, who had a career batting average of .245.

The number of times that Gehrig came to bat with the bases loaded has not been fully researched. The first time it happened was on September 26, 1923 in one of his very early games. It was the eighth inning in a contest against the Tigers and Lou unloaded a double against Ray Francis for the first runs batted in of his major league career. Some baseball historians imply that Francis walked Ruth to get to the untried rookie, but this was unlikely as the base on balls to the Babe forced in a run before Gehrig stepped in.

It is known that Gehrig hit six triples with the bases loaded – one off Lefty Grove. This is not a record, as John Shano Collins is credited with eight, and Stan Musial has the NL mark with seven. As Collins had only one grand slam homer in his career, and Musial had nine, it does reinforce the belief that Gehrig was the most dangerous batter with the sacks jammed.

Here are the all-time leaders in home runs with the bases loaded, with the number of homers and games per grand slam. 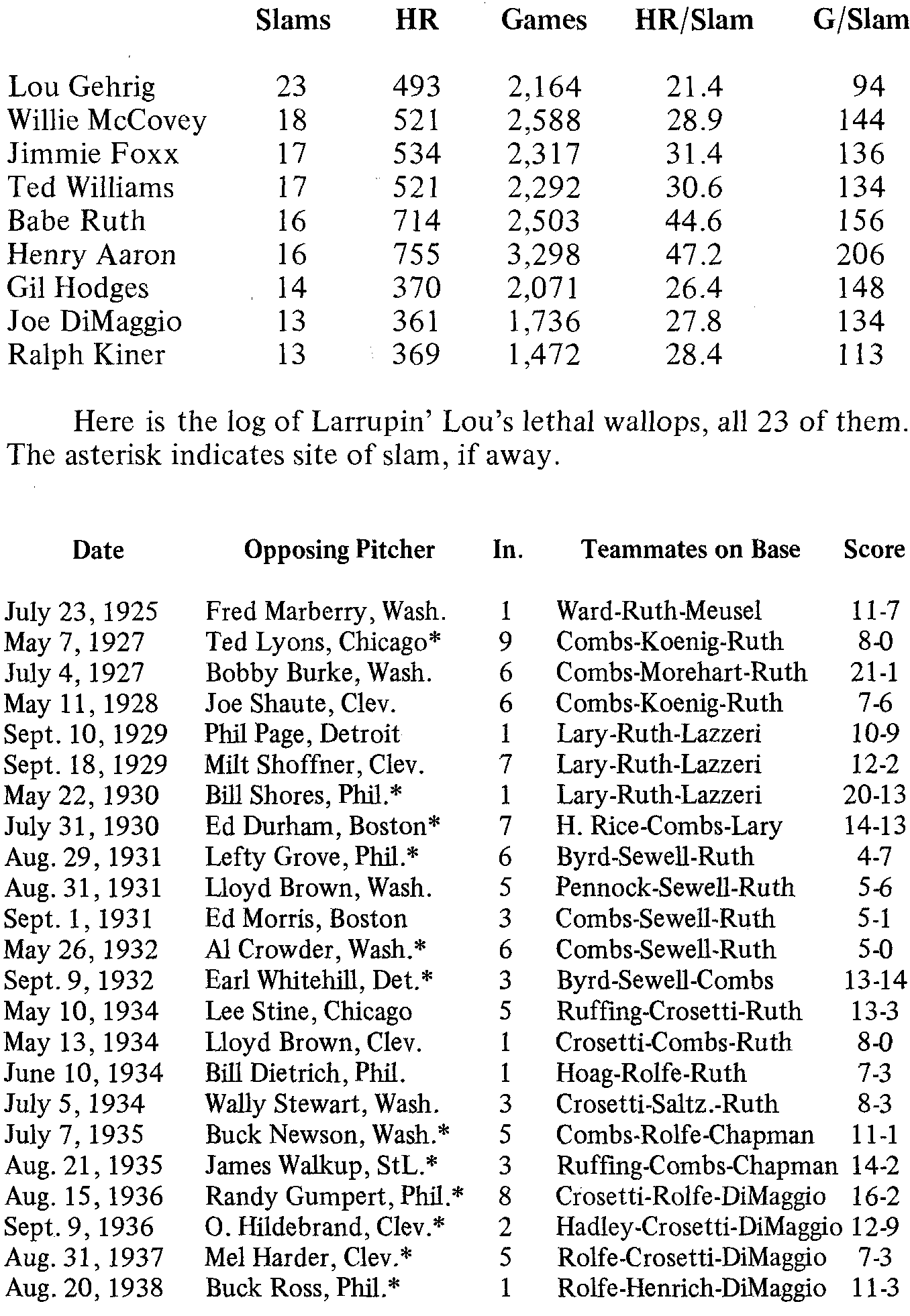