Editor’s note: This is a sidebar to Herm Krabbenhoft’s article, “Lou Gehrig’s RBI Record: Striving To Get It Right Thanks to 40 Years of Research by SABR Members”, in the Fall 2011 edition of the “Baseball Research Journal”. 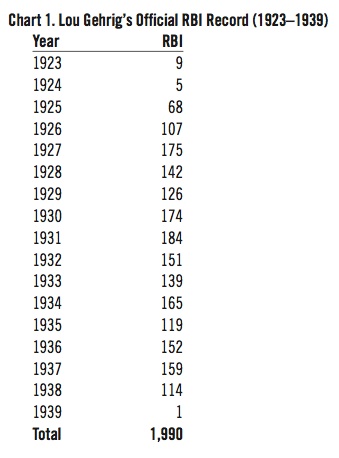 As shown in Chart 2, Gehrig was at times credited with 1,991 lifetime RBIs—one RBI more than the 1,990 RBIs calculated from his official DBD records (Chart 1). According to my research, the earliest mention of Gehrig having 1,991 lifetime RBIs is in the 1940 edition of The Little Red Book of Baseball, which provides the career statistics for players who were active in 1939 and had 10 or more years in the majors. In fact, the “one extra” RBI is also given in each annual edition of The Little Red Book from 1934 through 1939. Thus, through the 1933 season, Gehrig had 1,280 RBIs according to his official DBD records, but the 1934 edition of The Little Red Book of Baseball lists him with 1,281. Likewise for the 1935 edition, which lists Gehrig with 1,446 career RBIs while the official DBD records tallies to 1,445. So, the origin of the “one extra” RBI appears to be The Little Red Book of Baseball, sometime during the 1923–1933 period. Was this merely a clerical error or typographic mistake?

Reference to other publications allowed me to pinpoint 1924 as the specific season of origin for the “one extra” RBI. Daguerreotypes (The Sporting News), The Encyclopedia of Baseball (Macmillan), and Sports Encyclopedia: Baseball (Neft & Cohen) each present year-by-year statistics for Gehrig. Those editions which present Gehrig with 1,991 lifetime RBIs each list him with six RBIs for the 1924 season—one RBI more than the five RBIs in the official DBD records.

In an effort to find out which specific 1924 game Gehrig was given credit for the additional RBI, I checked the accounts given in multiple newspapers for each of the 10 games that he played in that season; I also checked out the Retrosheet Play By Play accounts (generously provided by Dave Smith) for seven of the games. I ascertained the exact details for each and every run the Yankees scored in those 10 games. My research showed— without a doubt—that Gehrig had exactly five RBIs in the 1924 season, achieved in exactly the same games indicated in his official DBD records. So, the “one extra” RBI was not from a specific game, but rather appears to be the result of a clerical error or typographic mistake in The Little Red Book of Baseball—a mistake that was transferred to some other publications and perpetuated for nearly 60 years.

Click here to go back to the Fall 2011 Baseball Research Journal.