This article was written by Don Nelson

This article was published in the The National Pastime: Monumental Baseball (Washington, DC, 2009)

Maryland has produced five of the top 53 major league–leading career home-run hitters through the 2008 season:

All of the above are in the Hall of Fame except Baines and Nicholson. 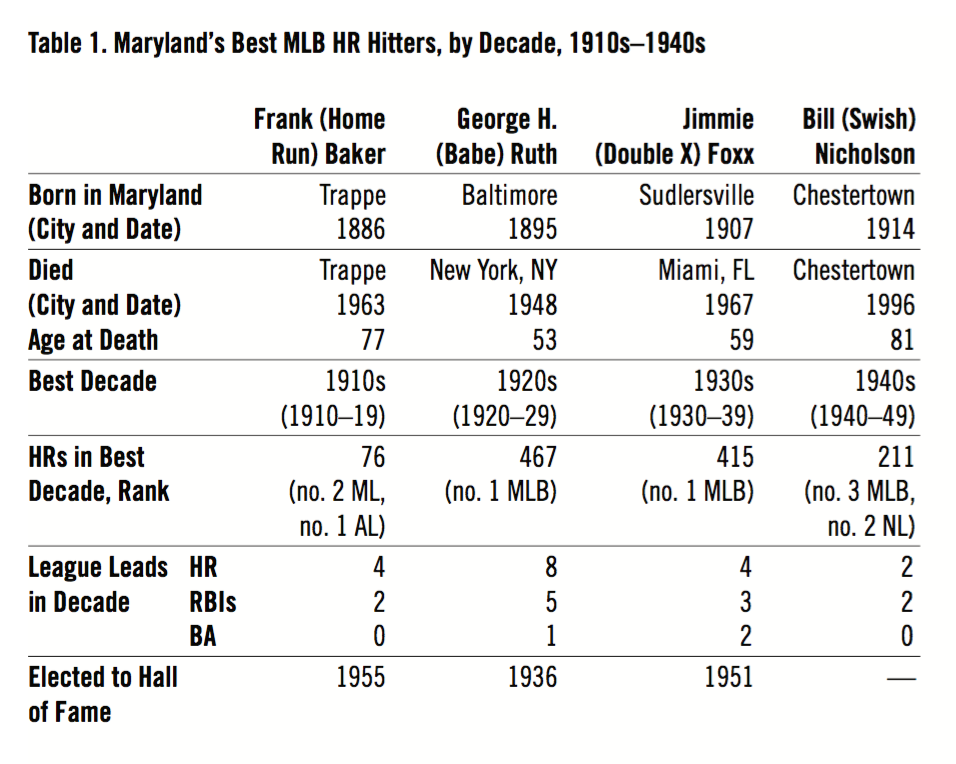 A little about each of the Old Line State’s native sluggers: What more can be said that hasn’t already been written about Babe Ruth? His legend, more than 1 0 years after his birth and more than 60 years following his death, continues to grow. I daresay Ruth’s name and image appear in the media today more than any other person’s, save the president of the United States. He is the most famous baseball player of all time. He was born and raised in Maryland’s largest city, went to “school” there, broke in with the International League’s Baltimore Orioles, and has a museum at his birthplace, 216 Emory Street, Baltimore, a few blocks from Orioles Park at Camden Yards. His single-season record of 60 homers in 1927 stood for 34 years, and his career HR record of 714 lasted for 39.

Jimmie “the Beast” Foxx was born and raised on a farm outside the tiny town of Sudlersville on Maryland’s Eastern Shore. There is a statue of Jimmie in the center of Sudlersville (population 390); the town honored him in 2007 on the one hundredth anniversary of his birth.

Cal Ripken Jr., a living legend, is, of course, best known for his consecutive-games playing streak, 2,632 games. He played his entire major-league career—21 years— with the Orioles. The record streak may never be broken. He is now owner of the Class A Aberdeen (Maryland) IronBirds, an affiliate of the Orioles in the New York–Pennsylvania League. The IronBirds play in beautiful 6,000-seat Ripken Stadium. It’s a hard ticket to an IronBirds game; every home game has been sold out since 2002.

Al Kaline never played in the minors. His 22 years with the Tigers tie him with Mel Ott of the Giants and Stan Musial of the Cardinals for the second-longest career with one team. (Brooks Robinson and Carl Yastrzemski lead, with 23 years.) He won the AL batting title in 1955, .340. He is still in the Tigers organization.

Harold Baines likewise played 22 years in the majors, but with five teams, belonging to two teams more than once (Baltimore and White Sox three times each). He is presently coach for the White Sox and still makes his off-season home in St. Michaels, a picturesque fishing village and tourist destination on the Eastern Shore.

Only one of these three sluggers—Ripken, Kaline, and Baines—ever hit as many as 30 home runs in a season; Ripken cracked 34 in 1991. (See table 2.) 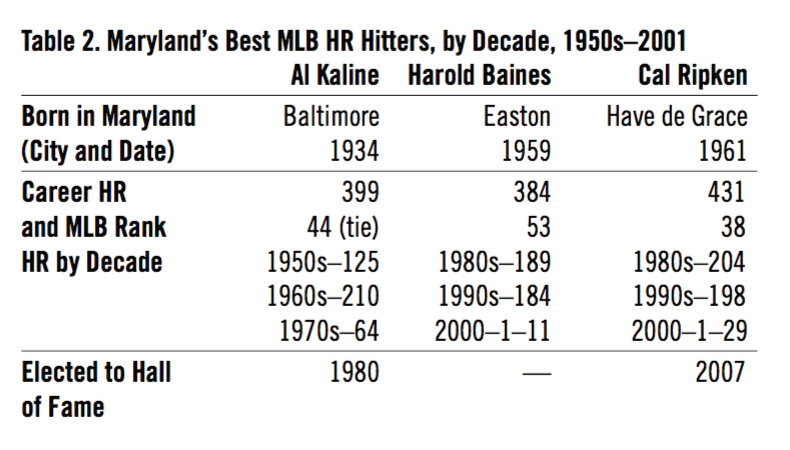 Frank “Home Run” Baker’s name says it all. Playing third base in the Deadball Era (before1920), when a home run was a novelty, he led the AL in HRs four times and RBIs twice (see table 1). He got his nickname by hitting a dinger in two successive World Series games in 191 , one a game-winner, the second a game-tier for the victorious Philadelphia Athletics. He discovered Jimmie Foxx and recommended him to Connie Mack.

It may come as a surprise that Bill “Swish” Nicholson was a leading home-run hitter of the 1940s, when there were other sluggers around (besides Williams and Mize), such as Ralph Kiner, Hank Greenberg, Rudy York, Ott, Joe DiMaggio, Keller, and Stan Musial. But Big Nick was the only one of these big hitters to play all 10 seasons of the ’40s. Swish clouted more roundtrippers—96—than anyone else during the four World War II campaigns, 1942–45. He edged out Ott, who had 95 big ones, and York from the AL, who hit 91 in the war years. Bill’s small hometown (population 7,500 in 2000) is only about 18 miles from Foxx’s home. Nicholson and Double-X were on the same team, the 1944 Cubs, and Nicholson has a statue, too.

Brady Anderson, he of the long sideburns, had his big year while batting leadoff for the Orioles. This was a spike in his career; his next-best season for homers was 24, less than half as many as his big-output season. (Other batters also “spiked” in their playing days.) He played for the Birds for 14 years, 1988–2001, with partial seasons with the Red Sox in 1988 and the Indians in 2002.

Mark Teixeira is carrying the torch for Maryland homerun hitters today, as the only native of the state hitting ’em out regularly. He debuted in 2003 with Texas and hit 43 HRs for the Rangers in 2005. He was traded from the Braves to the Angels in 2008, and the 29-year-old signed an eight-year deal with the Yankees before the 2009 season.

Charlie “King Kong” Keller (he never liked the nickname) was born in Middletown (present population 2,670), a village in north central Maryland near Frederick. His best year for the long ball was 1941, when he cracked 33 for the powerful world champion Yankees. He knocked three out as a rookie for the victorious Yankees in the ’39 Series. He was the brother of Hal Keller, another major leaguer. Following his playing days, he founded Yankeeland farm outside Middletown and was a successful horse breeder. Born in 1916, he died in 1990, at age 72.

At least one of the 12 players discussed here has been on a major-league roster every one of the past 100 years, from Baker in 1908 through Teixeira in 2008.

What is it about Maryland homer hitters? Is it the water? Maryland has plenty of that!