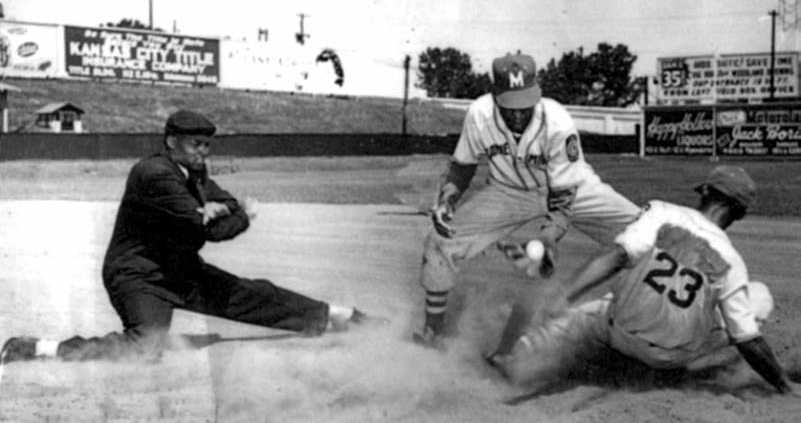 This article was written by Byron Motley - Bob Motley

This article was published in the Fall 2010 Baseball Research Journal 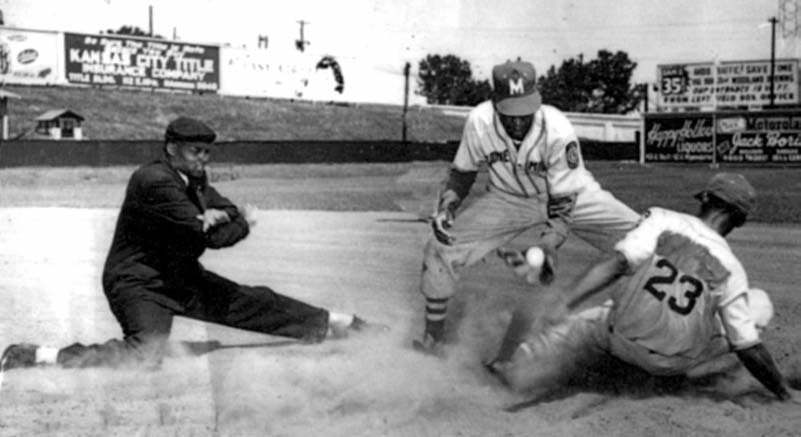 Bob Motley umpired in the Negro American League from 1947 through 1958. The only surviving umpire from the Negro Leagues, he tells of his experience in “Ruling Over Monarchs, Giants and Stars: Umpiring in the Negro Leagues and Beyond” (Champaign, Ill.: Sports Publishing, 2007), which he coauthored with his son Byron Motley, and from which the following article is excerpted. The authors would like to thank Tony Yoseloff and the Yoseloff Foundation for the Yoseloff/SABR Baseball Research Grant that helped make the book and this article possible.

People didn’t like the umpire back in the days of the Negro Leagues, and they still don’t really like umpires today. Some things never change!

It was pretty common in the Negro Leagues, that if the catcher didn’t like the way an umpire was calling balls and strikes, he would purposely let a pitch go by and let it smack the umpire right in the facemask. That happened to me at least a half a dozen times.

Of course the catcher would apologize profusely, trying to act as if he had just misjudged the ball, but it was always obvious he had done it deliberately. Of course after he’d pull this stunt, I’d eject him. One time after throwing out Memphis Red Sox catcher Casey Jones for doing this, Buster Haywood had the nerve to come out to question why I was tossing his catcher. So just to get his ire up for asking such an insane question, I tossed out his pitcher too!

When you get hit in the throat, chin, forehead or face (even wearing a mask) by a 90- or 95-mile-anhour fastball, believe me, you know you’ve been hit. It stings much worse than a foul-tipped ball because it’s a direct hit. Sometimes the ball would be thrown so hard it would actually get stuck in the mask. Once a ball came through my mask, just nipping on my cheekbone. Thank God the front part of the mask bore the brunt of the impact before it slipped inside.

Back in those days, players would do anything to try to upset the umpire. A good number of the times they would get away with it. Sometimes when a baserunner was sliding into the bag, if he knew he was going to be thrown out he would slide wide and barrel right into the umpire and spike him, just out of spite. Oh, the players did horrible things to us umpires. But we were troupers and brushed it off and kept right on going.

If you think the players in the Negro Leagues were a handful to deal with, they were a cakewalk compared to the fans. Fans were relentless and showed no mercy on umpires.

The fans loved razzing the umpires, even on routine plays. One minute they’d applaud you for making a good call (especially if you put a little extra zip in your hip), but they would turn on you in a second if you made a call they didn’t like.

In a few of the cities, like Birmingham, Indianapolis, and Cincinnati, the fans had a little song they chanted that was a crowd favorite, “Kill the umpire, Kill the umpire!” It was so common and popular among the fans that I expected to someday turn on the radio and hear Count Basie’s band or somebody else make a real version of the song. The chant got crowds so worked up into a frenzy that it was almost hard to hear yourself think. The organist always added to the madness by pounding out a weird-sounding dirge that got the entire stadium chanting, growling, and tomahawking in unison. It was weird! It was unnerving at first, but I quickly realized that it was just all in the fun of the game experience for most fans. Others, however, took it to be a literal declaration!

Once in Birmingham, our umpire crew came out of the stadium after a game only to find that the car we were riding in had been turned upside down by disgruntled fans. Blaming us for the loss of their Black Barons, the fans decided to take their angst out on us umpires.

In all honesty, I was never really fearful of fans, but I always knew to keep my wits about myself in dealing with them just in case. For instance, when exiting a stadium after a home team had lost, if someone approached me and asked, “Hey, weren’t you one of the umpires?” I’d calmly answer back, “No, I’m a spectator like you.” A couple of times I even added, “If you see that bastard, let me know, ’cause I’m looking for him too!” I learned quickly how to adapt to every situation.

As umpires in the Negro Leagues we also learned to never hold a long conversation with a fan. When I did affirm that “yes, I am an umpire,” I always kept walking (with facemask in hand) and never slowed down to engage someone in a lengthy conversation, even if their team had won, just in case they’d flash back to a previous game or call and decided to turn on you. As umpires we had to be thinking and aware all the time.

One thing about Negro League fans, they never blamed their team for a loss, it was always the umpire. A player could have bobbled a ball or made an errant throw and the fans would blame the umpire. A pitcher might give up hit after hit or a batter might strike out time after time, swinging nonetheless, but guess who’d get the blame? The fans would always find something that had happened in the game, no matter how badly their team may have got beaten, and find fault with the umpire. As sickening as it sometimes was, I was always impressed by their dedication.

Several times when crowds were really pissed off about a loss, the umpire crew would have to wait for the entire stadium and parking lot to clear before we’d exit. We didn’t want to take any chances.

In one particular game at my beloved Blues Stadium, in front of my now adopted hometown folks of Kansas City, I found out just how intense the wrath of Negro League fans could get.

I think I’ve blocked out the exact scenario that led up to the particular incident, but it’s the only time I was actually afraid of the fans. All I remember is that, on the last out of the game, fifteen thousand Monarchs fans decided to blame Bob Motley for the team’s loss. All of a sudden a sea of Coca-Cola bottles started sailing past my head like bazookas being fired from Uzis. Bottles came out of the stands like it was raining. A couple actually hit me and some of the other players who didn’t have a chance to run off to the safety of their dugouts, thankfully without breaking and injuring any of us. As we stood around the field stunned at what was happening, Buck O’Neil and Oscar Charleston ran from their respective dugouts and told me to start walking toward second base, where it was harder for the bottles to reach. The bottles kept coming by the dozens from all directions, and within minutes the field was littered with them! Fearing an out-and-out riot, Buck and Charleston escorted me all the way to the center-field wall and we made an escape. How the three of us scaled that wall and they got me to safety is still a mystery to me, but we did.

True to the spirit of Negro League competition, the next week all was forgiven and everybody acted as if nothing had ever happened.

To me, the Negro League fans were the greatest fans in the world. They were devoted, passionate, fanatical, crazed, and raucous. In short, they loved their baseball. They enjoyed every aspect of the game— from getting dressed up in their finest attire, to the tailgating-like picnics, to the carnival-like atmosphere of pregame activities such as concerts, beauty contests, and other activities that different teams provided as entertainment, to the games themselves. People came out to enjoy a full day of fun at the ballpark.

The concessions at a Negro League game usually consisted of the standard popcorn, peanuts, Cracker Jacks, hot dogs, candy, and soft drinks, which were served in bottles. At Martin Stadium in Memphis they even went a step further, serving chitterlings in a cup, which I always enjoyed, arriving early to make sure I got filled up before a game.

No alcohol was served at Negro League games to my knowledge. Those who wanted to indulge in spirits during a game had to sneak in their favorite booze. You would see people all over the ballpark with different styles of flasks—disguised as transistor radios, cameras, and binoculars—and sipping away and indulging in their favorite adult beverage.

To demonstrate just how serious the fans took their baseball: On Sundays, all over the country where there was a Negro League game scheduled, preachers cut their sermons short because they knew that, come 11, 11:30 at the latest, the entire congregation was going to start filtering out, making their mass exodus to the ballfield for the noon game. This tradition had gone on for years and continued in the Negro American League well into the mid-1950s.

To underscore the importance of black baseball during this time: You must realize that, before the height of the Negro Leagues, black Americans had very few heroes we could identify with. As far as sports figures were concerned, there were only a handful— Joe Louis, Jack Johnson, and Jesse Owens. There were also few political leaders, fewer successful black businessmen or -women, and even fewer professionals such as lawyers, doctors, or dentists. So, ballplayers and musicians, along with clergymen and schoolteachers, were the role models for most black Americans. That is why, even today, sports and entertainment are a big part of black culture and will probably always be. They are entrenched in our culture.

Unlike today in the sports community, it was rare that you heard a fan badmouth a Negro League player, especially one of their hometown guys. Fans were loyal to the bitter end, no matter who was on the roster. Even if a player jumped ship and moved over to another team, fans for the most part held each player in high regard, even the opposing team.

Interestingly enough, women were more fanatical about the game than men. They came in droves and were always dressed to kill in their sundresses, flowery hats, and high-heeled shoes. In the days preceding a big Sunday game, beauty shops would give discounts to women so they could get their hair done and ready for the big day. During the week you might see a woman’s hair looking pretty nappy, but come Saturday before the game, you’d walk down 18th and Vine in Kansas City, or Main and McCall in Memphis, and you could practically smell the hair burning from the hot combs and curling irons that beauticians were using getting those “’do’s” done!

Yes, the women were dedicated supporters. I’ve been called “you no-good so-and-so umpire” or “you blind bat” by more women from the stands than a male spectator would ever have thought about doing. Women loved their hometown teams. A buddy of mine told me once about catching the fury of a group of women in the old Blue Room tavern in Kansas City, for badmouthing the Monarchs after a game. They jumped and beat him, not brutally, but enough that he never said another negative word about the Monarchs in public again.

BYRON MOTLEY, the son of Bob Motley, is a historian of the Negro Leagues.