This article was written by Bill Carle

Most articles written about Craig Biggio or Jeff Bagwell will contain a statement similar to the following: “Biggio and Bagwell are the last of a dying breed. In these days of free agency, it is rare for players to remain with the same team for their entire career. It isn’t like the old days.” Is that statement true? I compiled a list of all players who played at least 15 years in the major leagues and spent their entire career with one team.

The results are shown in the accompanying table. There have been 63 players who qualify, and they are sorted in the table by their debut dates.

The first one to do it played his entire career in the 19th century. Considering the instability of the franchises in that era, it is surprising that anyone could play his entire career with one team, but Bid McPhee broke in with Cincinnati in the American Association in 1882. When the franchise was absorbed into the National League in 1890, McPhee went along and stayed with them until his career ended in 1899.

The most long-term, one-team players active at any one time was in 1946, when eight of them were active. Ted Lyons and Mel Ott were in their 21st season, Mel Harder was in his 19th, Bill Dickey was in his 17th, Tommy Bridges was in his 16th, and Luke Appling, Frank Crosetti, and Stan Hack were in their 15th. As recently as 1988, there were six active: Dave Concepcion, George Brett, Robin Yount, Jim Rice, Mike Schmidt, and Frank White. Of course, in 1988 you heard the same talk about those guys being the “last of a dying breed” as well.

A few facts emerge from looking at the table. Of the 63 players in the table, 57 are eligible to be elected to the Hall of Fame. Thirty-four have been elected, or 59.6% of them. Ripken and Gwynn were the most recent to join this elite group in 2007. At least they don’t have to spend time wondering what cap will be shown on their plaque. There are 22 different teams represented. With nine players the Tigers have the most: Hooks Dauss, Charlie Gehringer, Tommy Bridges, Al Kaline, Bill Freehan, Mickey Stanley, John Hiller, Alan Trammell, and Lou Whitaker. No team ever had more than two players active at the same time. The teammates who played together the longest were Alan Trammell and Lou Whitaker, who played together for 19 years.

Interestingly enough, in over 100 years of baseball, the Philadelphia/Kansas City/Oakland Athletics have never had anyone play their entire career with them who played longer than 13 years (Pete Suder and Ed Rommel). It looks like Connie Mack and Charlie Finley had at least one similarity as owners.

The conclusion that can be drawn from all of this is that a player playing his entire career with one club has always been a rarity, and while players like Jeff Bagwell, Craig Biggio, John Smoltz, and Bernie Williams may not be a dying breed, they are certainly unique and should be appreciated for their loyalty to their clubs.

BILL CARLE is chairman of SABR’s Biographical Research Committee and a diehard fan of the Kansas City Royals. 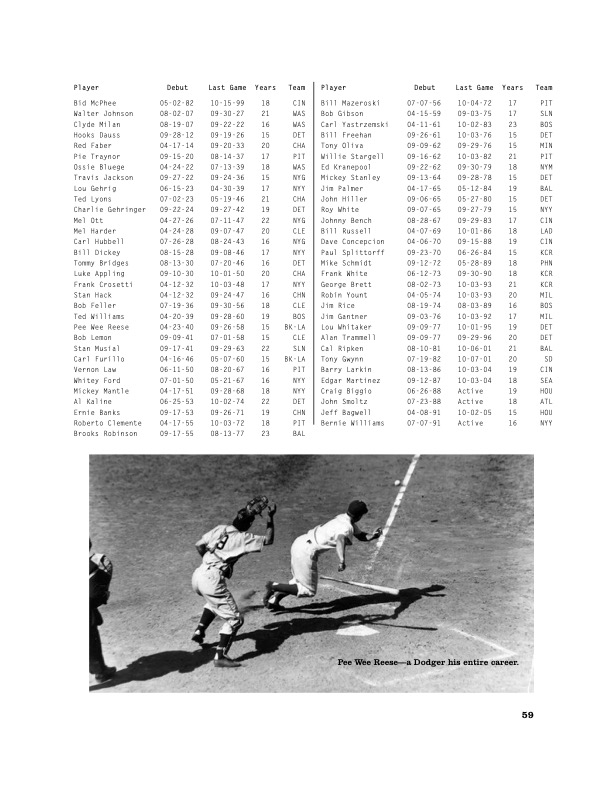