This article was written by Don Nelson

The Baltimore Orioles have been the most successful team in baseball since the major leagues began divisional play in 1969. The Orioles have played at a near-.600 clip in the 16 years of regular-season play in the 1969-84 period and have never had a losing season in that span. The 0’s have won more divisional titles (seven) and more league crowns (five) than any other team. They have played in – and won – more post-season games (33) than anybody else.

Eight teams – two in each division – have been decidedly dominant in the past 16 years. They are the Orioles and Yankees in the American League East, the A’s and Royals in the AL West, the Pirates and Phillies in the NL East and the Reds and Dodgers in the NL West. These eight, making up less than a third of the 26 teams, have won all but three world championships (the Mets and Cardinals from the NL East captured the crown in 1969 and 1982, respectively, and the Tigers from the AL East in 1984.)

Some other measures of the “Big Eight’s” dominance: 1982 and 1984 were the only years that at least one of them did not get into the World Series. In 11 of the 16 struggles for the big prize, two of the eight were combatants. Twenty-five of the 32 Series participants have come from among the elite eight.

Their combined totals work out to 45 divisional championships compared to 17 for all of the other teams, 25 league winners compared to seven for the other clubs, and 13 of 16 world titles.

Over the 16-year period, the Orioles have amassed 1489 regular-season victories, 81 more than any other team, and an amazing average of 93 per season. Their 1026 defeats are 98 fewer than the total of their closest rivals, the Dodgers.

Although the Bal’mer team has had the most success overall, that is not to say the Orioles have won all the glory. The A’s have hoisted the most world championship flags – three, all in succession – during the 16-year period. The Mets made the most of their two divisional titles, winning the league playoff both times and the World Series once. They took the A’s to seven games before succumbing in the 1973 Series. While the Mets have an outstanding record in post-season play (13-6), they have failed to play break-even ball in regular-season competition. Despite their great 1984 showing, their percentage since 1969 is .473.

While the Orioles have been consistent winners with a goodly measure of the “thrill of victory,” the Red Sox have certainly often tasted the “agony of defeat.” Until 1983, the Bosox, too, had never had a losing record since divisional play was started. But they won their division (and the league) in but one season, 1975. The Red Sox most often have had to play second fiddle to either the Orioles or Yankees in their division, the AL East.

As Table II shows, 12 of the 26 teams have played at better than a .500 pace since the inception of divisional play. Besides the “Big Eight,” they are the Red Sox, Tigers, Cardinals, and Astros.

Where there are winners, there must by definition be losers. It’s not just the expansion teams that have failed to win. The Indians have never won so much as a divisional crown, and the Cubs captured their first in 1984. Among other pre-expansion franchises, the Tigers, Braves, and Twins gained some measure of triumph through divisional championships twice each and the Giants and White Sox once each. But only in 1984 Tigers managed to win the league playoff. The Cardinals cruised all the way to the top in their one big year, 1982.

The Brewers, Royals, and Padres are the only expansion teams besides the Mets to make it to the Series. The book on the remaining six expansion teams: Divisional titles, Angels, two; Astros and Expos, one each; Blue Jays, Senators-Rangers and Mariners, none.

The accompanying Table I shows how the “Great Eight” have dominated. One star (*) signifies a divisional title; two, a league championship; and three, a World Series winner. Note the void in the records of the Dodgers through 1973 and the Yankees, Royals, and Phillies through 1975. 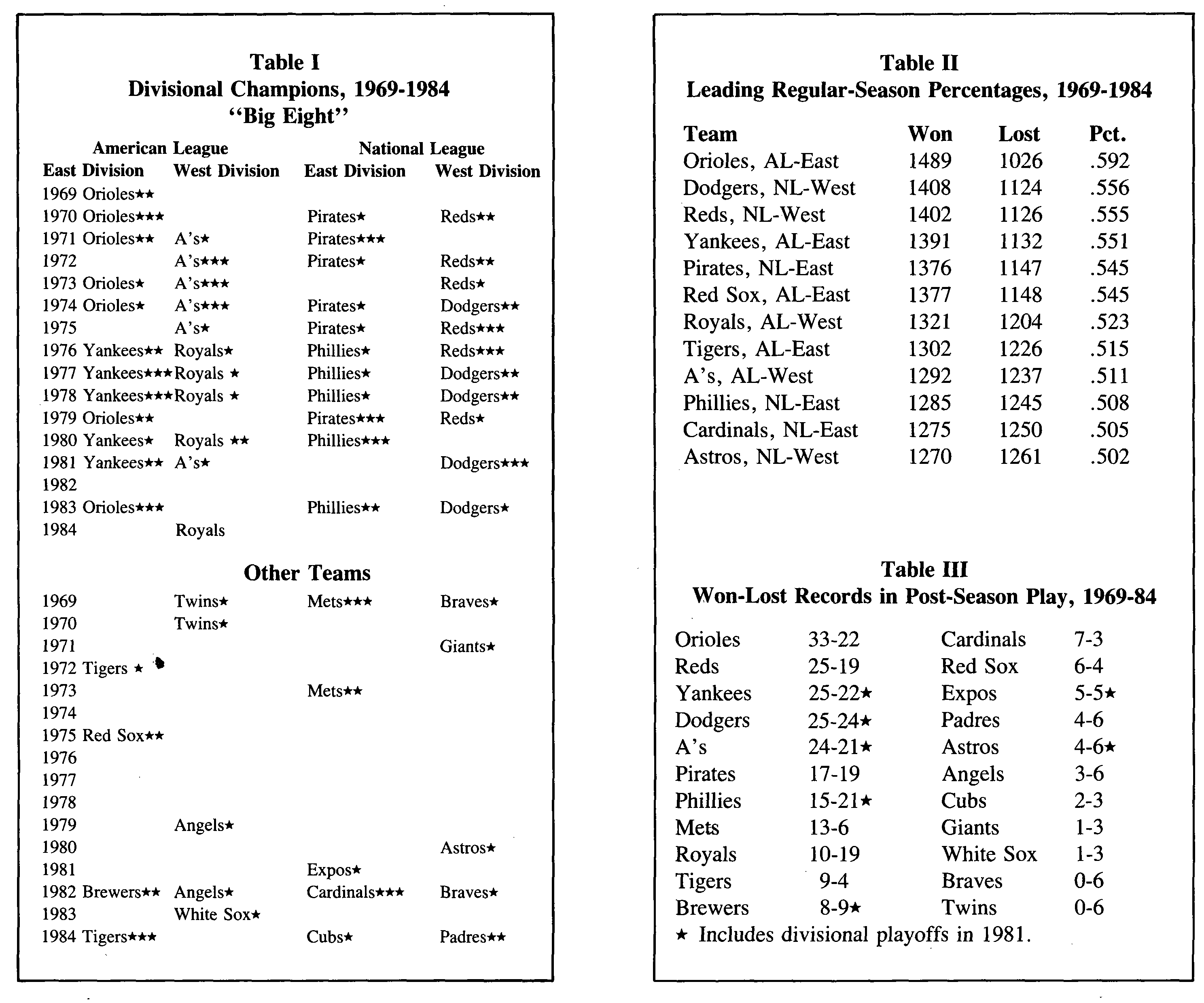 They all started to come on in the mid-1970s. Also, a note from the second part of the chart that the cells of the “Other Teams” are mostly empty.

The records of all teams in post-season play are shown in Table III. While the Orioles have won 33 League Championship Series and World Series games, there are two teams that have yet to win a post-season game since the start of divisional play in 1969. They are the Braves and Twins, each of whom lost all six of their LCS appearances.