This article was written by Jim Polhamus

Since the cry of “Play Ball” first rang out, major league pitchers have been striving to stifle the intentions of major league batsmen. Some have succeeded admirably, others have enjoyed modest success, but the majority have lacked the talent to sustain lengthy and successful careers. Being both successful and durable is a rare combination attained by relatively few pitchers in major league history.

Some pitchers have enjoyed spurts of greatness and then faded, while others have had lengthy careers but never rose above journeyman status. This study is devoted to those rare individuals who had the talent and stamina to be successful major league pitchers over an extended period of time.

How is pitching success measured? Popular measurements include earned-run average, strikeouts, complete games, saves, etc. But the one overriding goal of every pitcher each season is to win more games than he loses-and the more victories in excess of defeats the better. Therefore, any pitcher who wins more games than he loses will have enjoyed a successful, or winning, season.

To remain objective and for ease of reference we will not consider the ratio of wins to losses, the actual number of wins and losses, or the record of the pitchers’ teams. As long as a pitcher has a winning season, whether it be 31-4 or 1-0, he is considered successful for that year. Seasons with low-decision totals such as 1-0, 2-1, 3-2, etc., are legitimately included because they indicate that the pitchers involved rose to the occasion even when opportunities were few and won a majority of the decisions. This is particularly pertinent for relief pitchers, who frequently have low-decision totals. While we realize the importance of saves as well as victories for relievers, only won-lost records are considered in this analysis.

With respect to longevity, a career of at least ten seasons with one or more pitching decisions has been selected as a fair time measure of ability and consistency for an extended period. Therefore, all pitchers who earned one or more decisions in at least ten seasons comprise the group from which were selected the most consistent, long-term winners, those who enjoyed at least ten winning seasons in their careers. (Only those years in which at least one decision was recorded are included in career season totals.)

Among the nearly 6,000 men who have pitched in the big leagues between 1876 and 1984, there have been 578 who qualified as ten-season performers. Of those, 95 or 16.4 percent had ten or more winning seasons. The number of seasons pitched by this elite group of 95 ranged from exactly ten by Spud Chandler and Babe Ruth to 24 by Jim Kaat, whose twenty-fifth and final season of 1983 is disregarded because he had no decision that year. 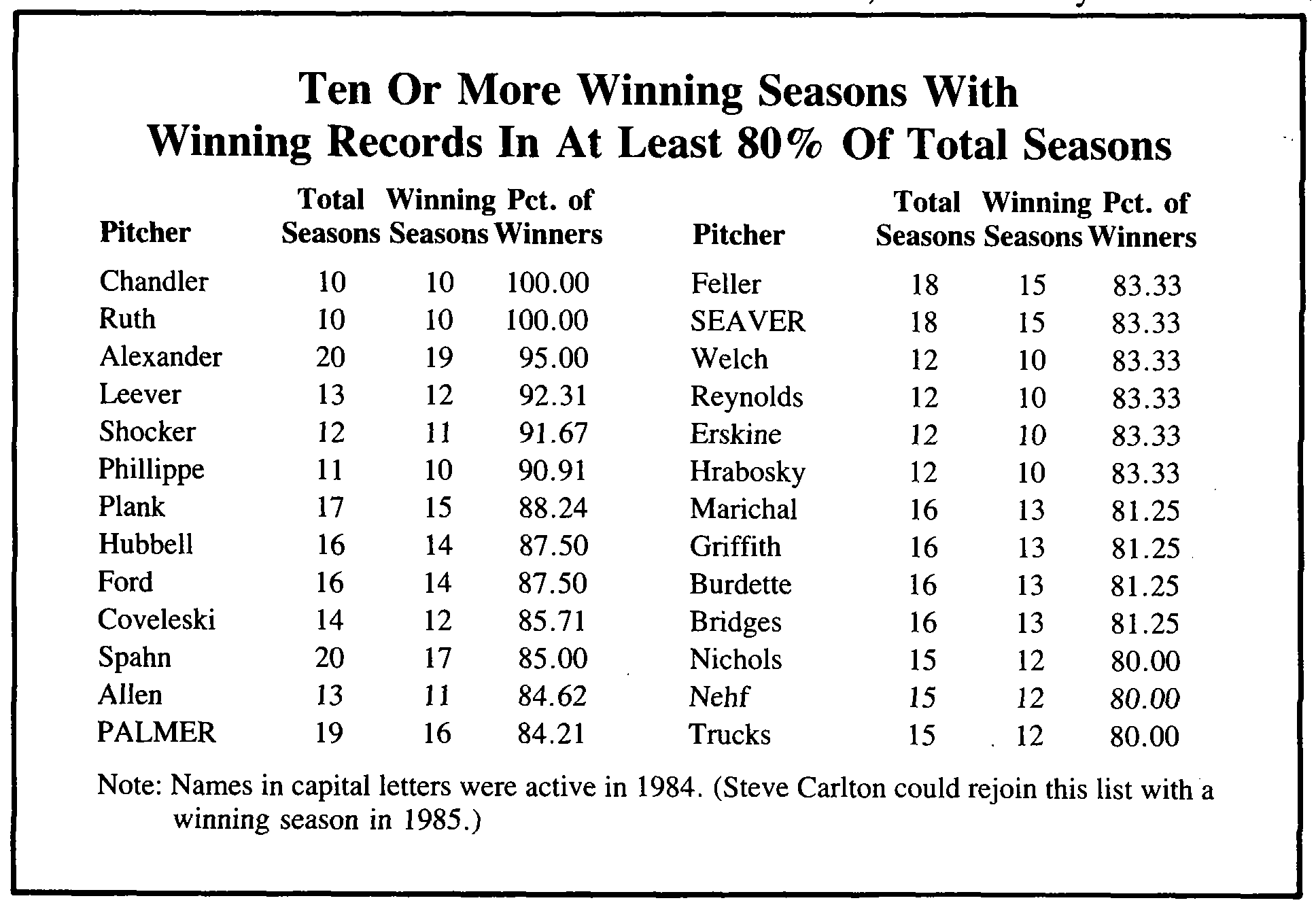 (Note – Pitchers whose careers spanned two eras were included in the period in which they registered the majority of their victories.)

During the years prior to 1893, when the pitching distance was 50 feet, only 18 pitchers earned decisions in ten or more seasons. Of these, only Hall of Famers Mickey Welch and Tim Keefe enjoyed ten winning seasons.

From 1920 to 1945, despite the lively ball and heavy hitting until the war years, the percentage of eligible pitchers who made our list was practically the same at 21.4 percent.

After World War II, beginning in 1946 and still continuing, the number of pitchers with ten-plus career seasons mushroomed. Expansion in the early 1960s and 1970s created dozens of new pitching slots. The emphasis on relief pitching created a whole new class of pitcher and also extended the careers of many starters. There were 268 twirlers with ten or more seasons whose careers fell in the 1946-1983 era, excluding those still active in 1984. Of these 268 only 29 or 10.8 percent had ten winning seasons. Obviously the expansion era extended many careers which under earlier circumstances would have lasted fewer than ten years. Also, the emphasis on saves as well as victories reduces the stigma of a non-winning season for good relievers. Therefore, most successful relievers last more than ten seasons but seldom have ten winning seasons. Of the 95 pitchers listed only ten can be considered career relief pitchers. Of these, two were active in 1984: Tom Burgmeier and Tug McGraw. 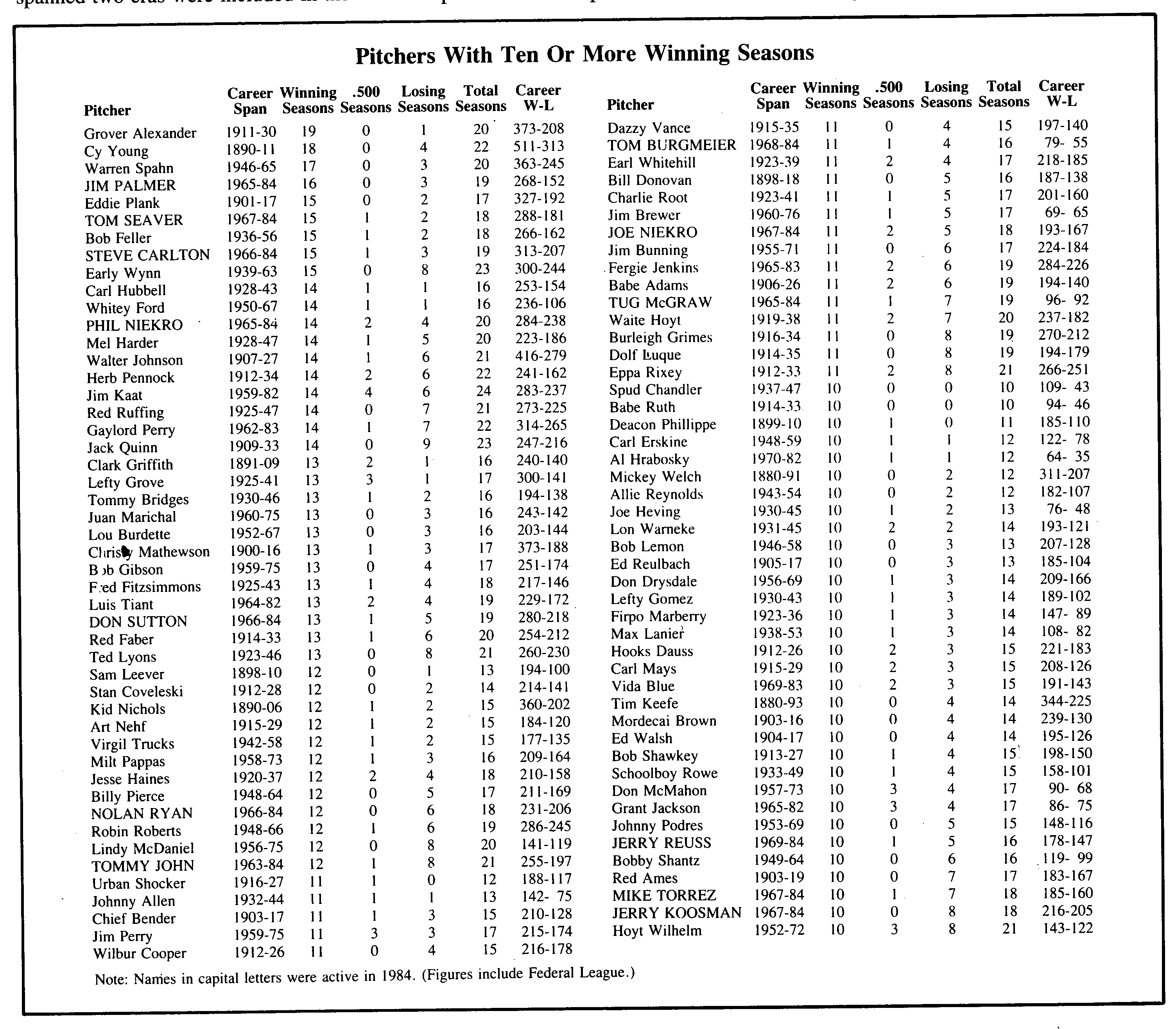 During the past two decades, improved medical treatment, conditioning programs, and pitching techniques have extended many careers beyond what was once considered geriatric performance limits. While age 35 used to be considered old for a pitcher, the current upper age limit is steadily edging toward 45. The careers of Phil Niekro, Gaylord Perry and Jim Kaat bear this out. In addition, many pitchers past or near their fortieth birthday such as Steve Canton, Don Sutton, Tom Seaver, Joe Niekro, and Jerry Koosman are still going strong. Thus it is not surprising that of the 59 pitchers with at least ten seasons active in 1984, 13 or 22 percent had already pitched ten or more winning seasons. In addition to those 13 there were two others with nine winning years who could join the list in 1985: Bert Blyleven and Milt Wilcox. Dennis Leonard, who sat out 1984 because of injuries, has nine winning seasons and also could join the list if he enjoys a good comeback in 1985.

Grover Cleveland Alexander was clearly in a class by himself as a consistent winner over a lengthy career. Old Pete pitched for 20 seasons and produced a winning record during the first 19 of those seasons. Except for an 0-3 mark with the 1930 Phillies, he would have had a “perfect” career. Instead, he finished with a 95 percent record, tops among pitchers with 11 or more seasons. Chandler and Ruth top the list at 100 percent for pitching exactly ten seasons each with a winning record every year. Urban Shocker and Deacon Phillippe also never incurred a losing season, but each had one .500 season.

Some may question the inclusion of Babe Ruth in this study, but his pitching credentials are well known and he did pitch in ten different seasons between 1914 and 1933 and produced a winning record in each. In fact, Ruth is the only man in major league history to pitch in at least ten seasons and produce a winning record every season. (Chandler appeared in one game in 1944 without a decision.)

The list of pitchers with ten or more consecutive winning seasons is again topped by Alexander with 19, an incredible achievement. Ten pitchers in this elite group established their consecutive-season streaks from the outset of their careers, including Cy Young (15), Whitey Ford (14), and Bob Feller (13). Some streaks by pitchers on different teams overlapped, but no pair matched the performance of Warren Spahn and Lew Burdette, who both enjoyed ten-season winning streaks for the 1953-62 Braves. Spahn added an eleventh year in 1963, his last winning season.

The intent of the list is not to imply that these 95 pitchers are the greatest of all time, although most of the greatest appear on the list. As stated at the beginning of this article, the list is meant to recognize those pitchers who performed well over a long period of time. All those on the list, whatever their perceived status among hurlers past and present, must be considered masters of their craft and pitchers of note because they accomplished a feat not achieved by ten members of the Hall of Fame who pitched at least ten seasons. 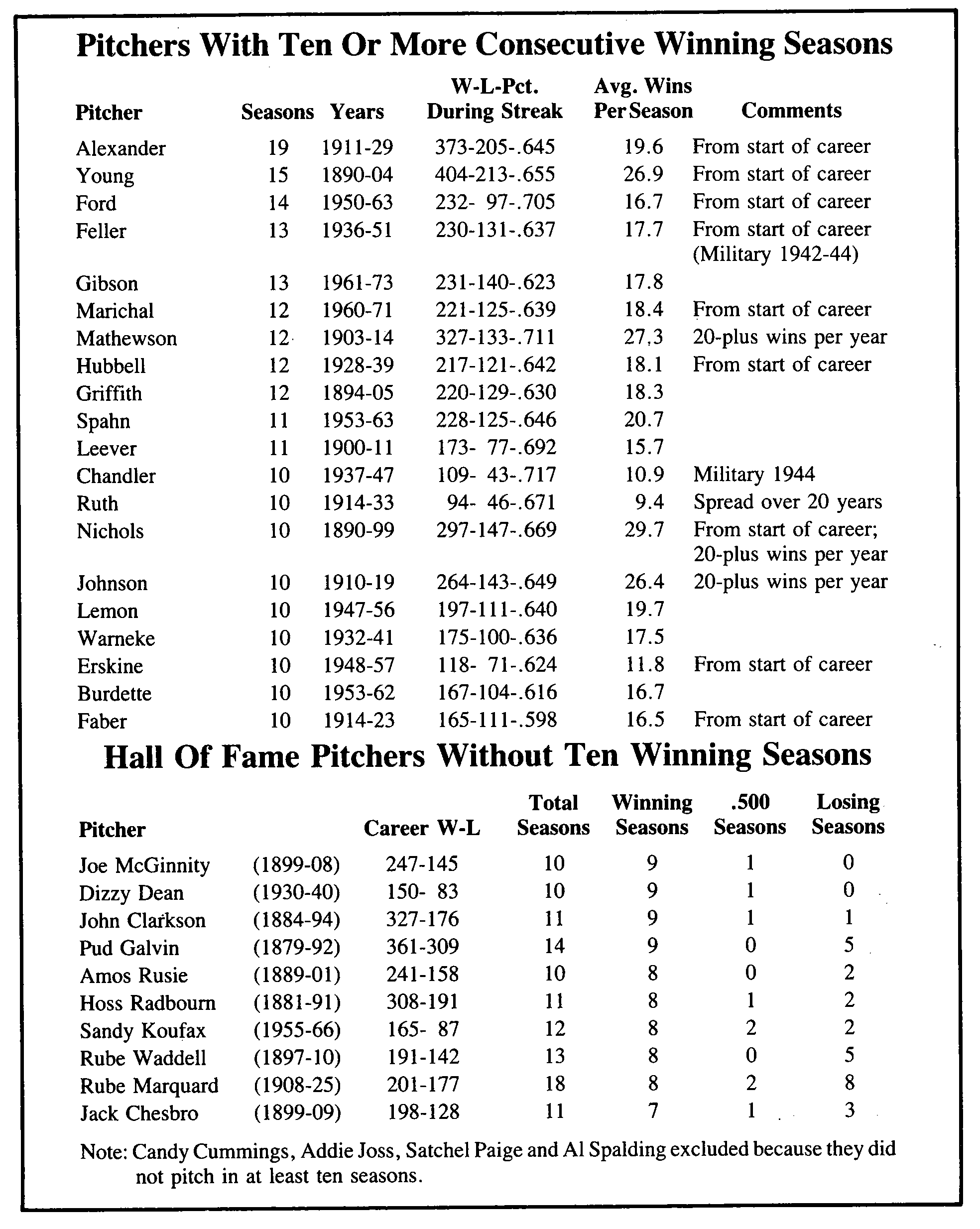