This article was written by Stephen Cunerd

Fourteen post-1900 hurlers have averaged 20 or more victories in their best ten seasons. Mathewson heads the group with almost 28 wins per year. Canton and Palmer are the latest additions to the list.

Through the years there have been many attempts to compare baseball’s outstanding pitchers. Statistical analysts have usually concentrated on either a pitcher’s career statistics or on particularly outstanding individual seasons. Both approaches have merit, but in each case some unanswered questions remain in terms of comparison of pitching greats. In addition to these studies, there should be some middle ground, a common denominator by which pitchers can be compared.

It is obvious that more than just a few seasons’ performances must be studied to determine pitching greatness. Many pitchers have turned in one or two outstanding years but have career statistics that do not rival those of the real pitching greats. Ewell Blackwell, for instance, was a fine pitcher whose career was shortened by arm trouble. In 1947 he won 22 games, but he totaled only 82 victories in the majors. On the other hand there have been many pitchers who amassed large victory totals due to longevity, yet there was no single season in which they could be considered dominant pitchers. Jack Quinn, for example, won 247 but never experienced a 20-victory season except in the Federal League in 1914.

In this analysis pitchers will be compared over their best ten seasons in the majors. In order to be eligible for Hall of Fame consideration, a player must have competed in ten major league seasons. Consequently that seems a good yardstick for measuring greatness. It is certainly long enough to establish excellence and consistency and at the same time allows for the impact of the super year.

In the accompanying tables, a pitcher’s best ten seasons were selected, whether or not they were consecutive. Many pitchers experienced a mediocre season in between outstanding ones. Some suffered a subpar year due to injury. Still others saw their career interrupted by military service. Accordingly, this study compares, the best ten years regardless of sequence in a pitcher’s career.

Table 1 shows the 51 twentieth-century pitchers who have won 175 or more games in their best ten years. Of this group 26 are already in the Hall of Fame and seven others were either still active in 1986 or not yet eligible for the Hall. Significantly, of the top 26 (those with 190 or more victories) 21 became Hall of Fame eligible and 18 of those have been elected. Only Vic Willis, George Mullin and Wes Ferrell have averaged 19 or more victories for ten seasons in this century and have not yet been elected. 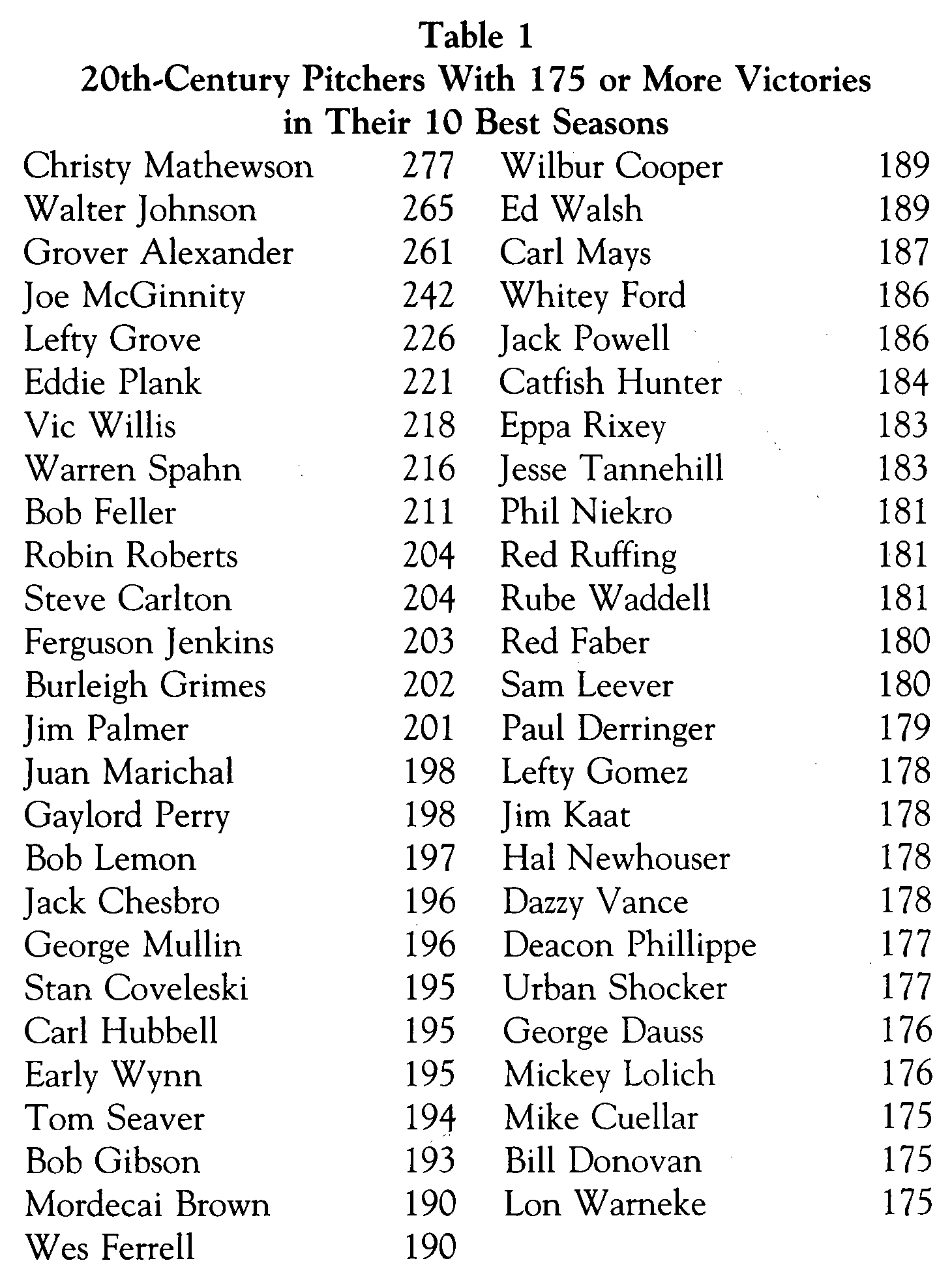 Table 2 lists the 19 pitchers who played entirely or primarily prior to 1900 and won 190 or more games in their best ten seasons. Not surprisingly, the top seven are Hall of Famers. It seems appropriate to include the pre-1900 group in a separate chart because teams frequently carried only two pitchers during that period, and for some of these pitchers ten years represented their entire career. 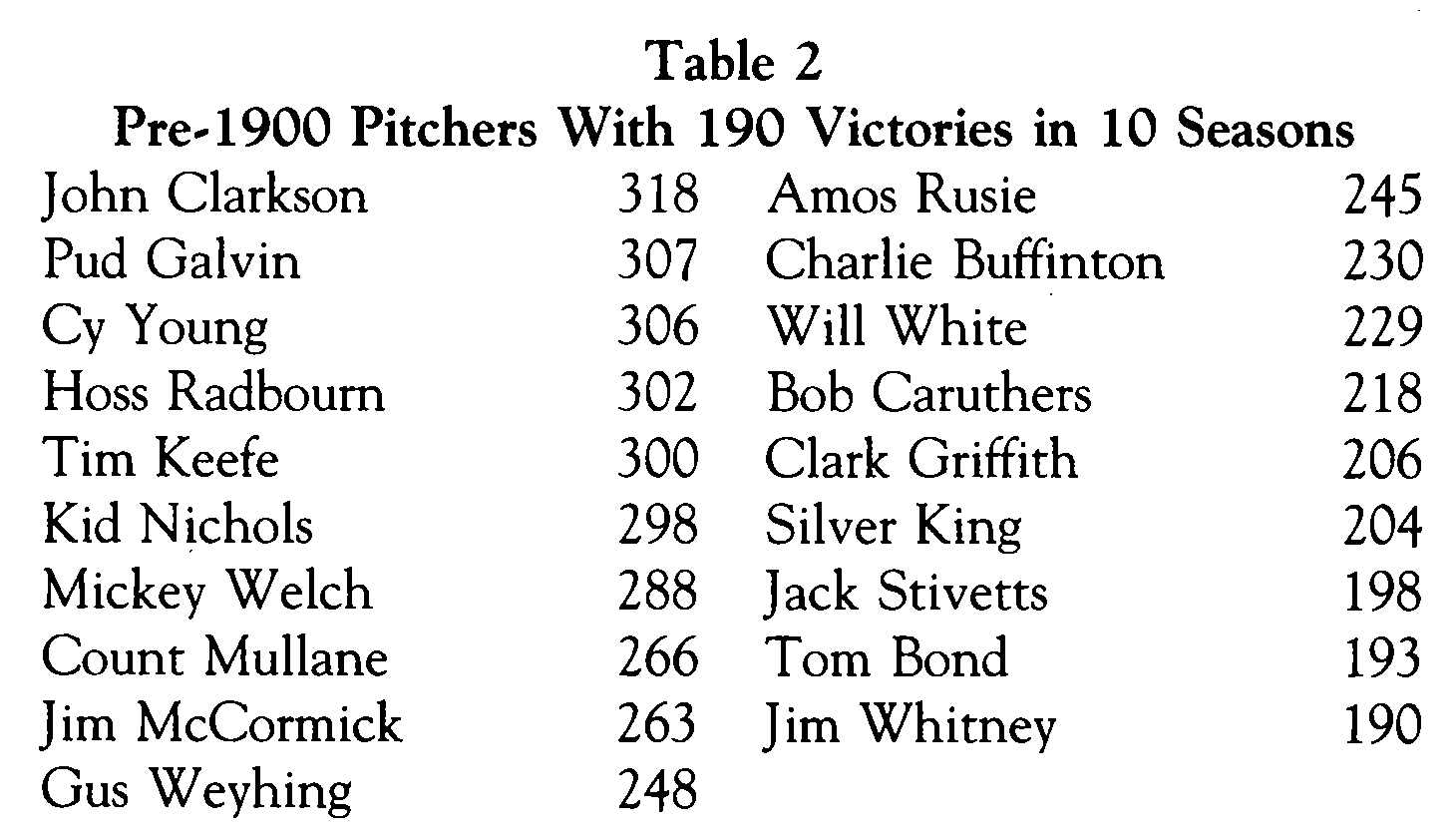 It is interesting to note that only 14 pitchers since 1900 have averaged at least 20 wins per season over ten years. Of these ten are enshrined in the Hall of Fame. Steve Canton was still active in 1986, and Ferguson Jenkins and Jim Palmer have not yet been retired long enough to be considered. Only Vic Willis is still waiting his turn.

If the comparison of pitchers was made over a shorter period, such as seven years, many more would qualify with a 20-victory average. Some Hall of Famers whose careers were shortened by injury or illness, such as Sandy Koufax, Dizzy Dean and Addie loss, would be included. The list also would contain some who dominated their period, but not for ten years. Hal Newhouser, Paul Derringer, Urban Shocker and Deacon Phillippe all averaged 17-plus victories over a ten-year period, but would top the 20-victory level if a seven-year average were used.

Some results of this analysis are not surprising. Most experts agree that Christy Mathewson, Walter Johnson and Grover Alexander should rank at the top of twentieth-century pitchers. It is also logical that Hall of Fame pitchers should dominate the top of the list. What might be considered surprising is that any non-Hall of Famer should be in the top 25.

The pre-1900 list also offers a mild surprise. While John Clarkson is a Hall of Famer, he is not usually rated as highly as Hoss Radboum or Cy Young. For his best 10 years, however, there is no pitcher in baseball history who recorded more wins than Clarkson’s total of 318.

Table 3 contains the average season for the best pitchers who are not yet enshrined in the Hall of Fame but are eligible for consideration by the Veterans Committee. It offers an interesting comparison of candidates, showing an average season of the pitcher’s ten best years in terms of victories and losses, complete games, shutouts, innings pitched, strikeouts and earned-run average. If a pitcher posted a single season like any of these in today’s market, he would command an enormous salary. 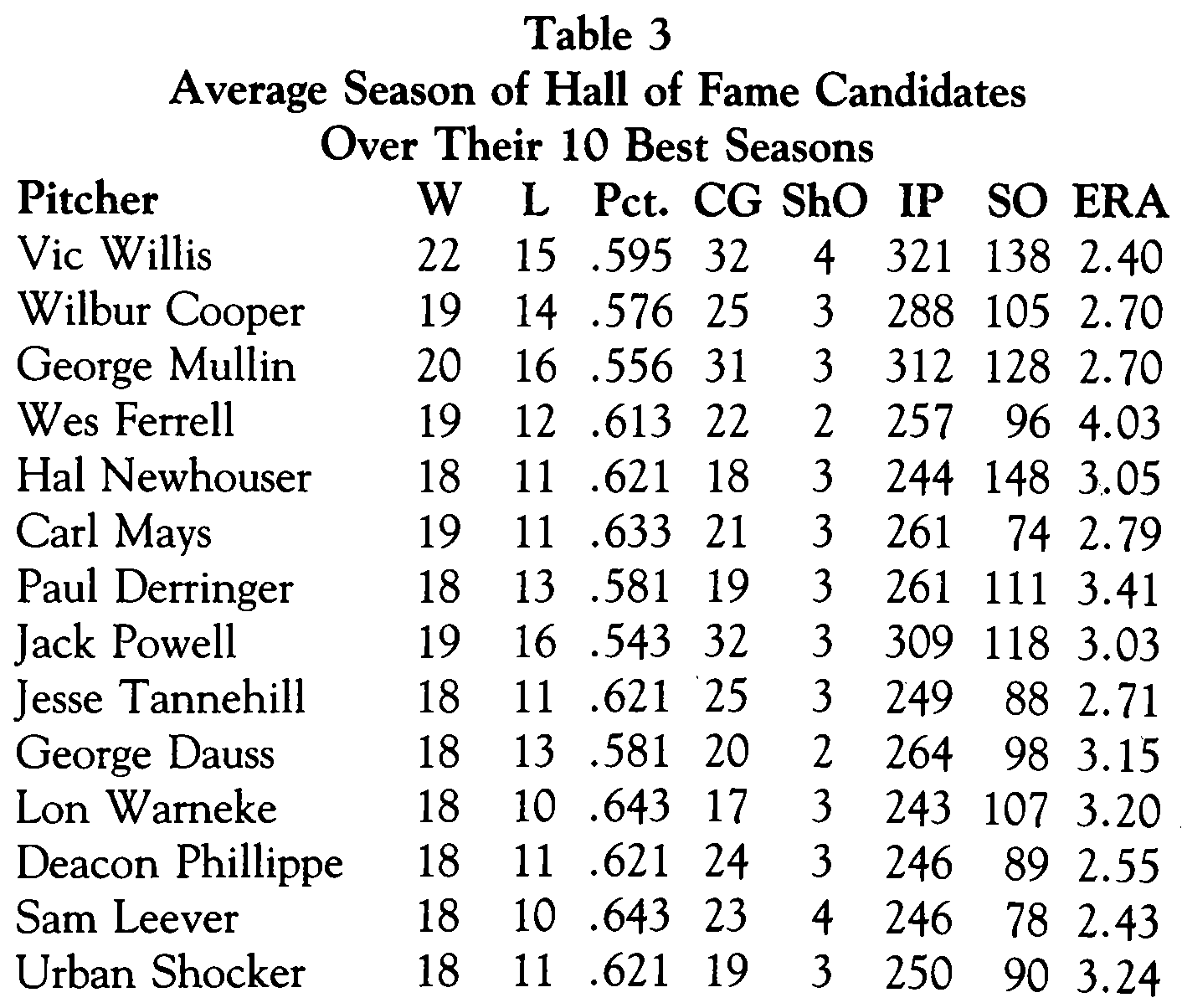 Baseball fans can draw their own conclusions from these ten-year statistics. The data support the greatness of those we already believed to be great. They endorse several others for greatness. Certainly they will provide ammunition for many fans who champion a particular favorite for Hall of Fame consideration. Following is information on several who stand out above the others:

Vic Willis: He is the only twentieth-century pitcher who has totalled 200 or more victories over a ten-year period and is eligible for the Hall of Fame but has not been elected. Not only does Willis rank first among modern eligibles in victories, but he rates seventh among all “modern” pitchers. In addition to his top rating in victories, Willis is first among eligibles in earned-run average and tied for first in complete games.

George Mullin: He won 196 games in his best ten seasons and is the only other non-Hall of Fame pitcher to show a 20-victory average.

Wes Ferrell: The third ranking winner with a 19-12 mark over his best ten seasons, Ferrell posted six 20-win seasons in his career. He was also a top hitting pitcher with a .280 career average and 38 home runs.

Wilbur Cooper: The winningest Pirate pitcher ever, he too averaged 19 wins over his best ten seasons. A 20-game winner four times, he showed a 2.70 ERA for his ten-year average.

Hal Newhouser: For his best ten years Newhouser was 18-11 and led all Veterans Committee eligibles in strike-outs, averaging 148 per season. For his best seven years, including five post-war seasons, Newhouser averaged 22 wins against 11 losses with 175 strikeouts and a 2.71 ERA.