This article was written by Marshall Adesman

One of the great joys of my life was the dozen or so years I spent working in minor league baseball. In that time, I bore the titles of General Manager, Assistant General Manager, and Business Manager, and even today, some thirty years after drawing my last baseball paycheck, many of my memories still put a smile on my face. But this one is, most definitely, my very favorite.

In the minor leagues, we always prided ourselves on our abilities to steal. No, not like Rickey Henderson, more like the TV networks each attempting their own version of “Real Housewives of…” We would hear about a promotion, gate attraction, or ad campaign that was clever and successful, and our first thought was “Will it work in my town?” (Our second generally was “Who can we get to pay for this?” but that’s another story.) Stealing from one another was (and still is, I’m sure) common and encouraged openly. But in my two years as Amarillo’s assistant general manager (1979 and 1980, when we were San Diego’s Texas League affiliate), we had a nightly feature that, to my knowledge, has never been duplicated and, in all probability, never will be.

Like most minor league teams, the Gold Sox had a booster club. It wasn’t very large, befitting our fan base, but they were all good folks who cared about the team and those of us who were trying, much like Quixote, to make a success of the venture. And two of our most active boosters were Bob and LaDean Halinski. 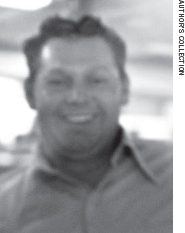 Bob was a short but powerfully built man, a native New Yorker whose accent had long since disappeared into the West Texas wind. LaDean was tall and thin, the owner of one of the world’s great lasagna recipes, which was proven and re-proven on numerous occasions. They were both always available if we needed help, either at the ballpark or at home. And they both had a fabulous sense of humor. Bob, especially, could tell a story like no other-his eyes would get a certain gleam as he launched into the joke, his expressive face would play all the parts as he led you to the inevitably uproarious punchline, and then he would laugh right along with you.

LaDean frequently helped us in the office, occasionally in the concession stand. Their son, Herb, spent one full season working the scoreboard, and I mean that literally. It was an old board, with only balls, strikes and outs operated electronically. The inning-by-inning totals, as well as the accumulated runs, hits, and errors, had to be dropped in by hand, so Herb sat inside the scoreboard night after night with a bird’s-eye view of 90 percent of the ballpark, excluding, of course, anything hit beyond the warning track. Meanwhile Bob would set up shop just a few feet inside the main gate and hawk our programs, using his ready good humor and natural effusiveness to sell more than we could have rightly expected. Then around the fifth or sixth inning, he would join LaDean in their box seats along the third base line.

I don’t recall exactly when or how we began what was to become a nightly routine—probably a chance remark on a cool night when the crowd was sparse. Sitting up in the press box as public address announcer, I had the grandstands, bleachers, and entire playing field laid out before me like a mosaic, and I could plainly see Bob take his seat next to LaDean. I’d wait for a natural break—generally an inning change, though occasionally when a new pitcher was coming into the game—and launch into my spiel:

Ladies and gentlemen, we have a special guest in the ballpark tonight. You’ve seen him in numerous movies, like “One Flew Over the Cuckoo’s Nest” and “Chinatown,” he’s here tonight watching the Gold Sox, please welcome MR. JACK NICHOLSON!

And Bob would stand up, wave to the crowd (most of whom were friends and acquaintances of his), and sit down.

We did this every night, the only variation being the name of the personality. It could be anyone, alive or dead, from any profession. I rarely told Bob what name I planned on dropping that night; often I didn’t know myself until the words started to come. Sometimes we would add some spice to this stew, like when I introduced him as Charles de Gaulle (deceased nearly a decade), and then played the French national anthem on the kazoo while Bob waved.

One night we introduced him as Walter Alston, the former manager of the Dodgers. Our owner and general manager, John Dittrich, had been in the office or concession stand when the announcement was made, and wandered into the stands just a moment later. A woman rushed up to him. “Oh, Mr. Dittrich,” she said with great excitement, “Where is Walter Alston?” “Somewhere in Ohio,” John accurately replied. “Oh, no, he’s here in the ballpark tonight!” she responded, and raced off to find her hero.

The night we introduced Bob as Jack Nicholson, a woman asked for an autograph. Bob tried to explain to her about the gag, but she wouldn’t listen. Even her husband tried to dissuade her, saying “They do this every night out here.” She would not be swayed. “I’ve seen all of your pictures!” she exclaimed. Must not have been looking too closely, because Bob did not resemble the great actor at all. Finally, to get her off his back so he could quietly watch at least a couple of innings, Bob signed. “See, I knew it was you!” she said triumphantly. Bob didn’t even spell it right, he later told me. And then some fellow sitting a row or two behind him bought the pencil he used to sign!

Occasionally Bob made suggestions to me. One time he found a huge Stetson hat, and I introduced him as Hoss Cartwright, then played the Bonanza theme on the kazoo. Another time he put a paper bag on his head and was announced as the Unknown Fan. (At the time, a comedian was appearing on TV with a bag on his head, telling jokes as “The Unknown Comedian.”) Later, LaDean also donned a bag and, along with their friend Sarge Baker, they were introduced as the Unknown Fan and his Family. I should point out that Sarge, ostensibly the sibling, was a good foot taller than Bob. When we had the Famous Chicken, LaDean worked for a week or more on a very specific costume, and at an appropriate time we introduced a very special guest… Colonel Sanders! Looked just like him, too, complete with an empty bucket, and a cleaver to help fill that bucket. Teddy Giannoulas, the Chicken, had not been told in advance about this addition to his act, but he played along perfectly, feigning fear for his life and then running off and hiding in the bullpen.

And sometimes life would imitate art. One afternoon, just hours before we were to begin a homestand against El Paso, the great Warren Spahn walked into our office. He was a roving pitching coach for the Angels that year, and he was in town to watch some of his young charges. That night he sat up high in the grandstand behind home plate to get a good view of what they were throwing, and how. I introduced him as a Hall of Famer, winner of 363 games, etc. Spahn obligingly stood up and waved to the crowd, but from my perch in the press box I could see that no one was looking at him, they were all turned towards the third base side, looking at Bob! I grabbed the mike and said, “No, people, look behind home plate, Warren Spahn really is here tonight!” Only then did people see him; poor Spahnie had to be filled in later on why people had responded like they did.

After two years I left Amarillo to take over as GM in Waterloo, Iowa. We didn’t do this promotion there; we didn’t have a Bob Halinski. But Bob and LaDean and I always stayed in touch, and when we moved to Durham, North Carolina, they came to visit a couple of times. We rehashed all the old stories, and he told some new ones with his usual panache, and my face would ache for days from all the smiling and laughing I’d done.

One summer night, out of the blue, LaDean called to say that Bob had passed away. He’d contracted a disease so rare it generally only strikes children, and then very few of those. He was in a great deal of pain at the end, so much so that death was a relief. He was not even 60 years old.

As you probably can tell, I think of him often and miss him a lot, and wonder why he died so young. While writing this, I think I now understand. I’m not an especially religious person by nature, but I think it’s likely God needed someone who could tell a good joke, or carry on a great running gag. “Ladies and gentlemen, we have a special guest in heaven tonight…”

MARSHALL ADESMAN spent a dozen years as an assistant general manager, general manager and business manager for teams located in Florida, Texas, Iowa, New York, Virginia, and North Carolina. He also worked for 21 years at Duke University as an administrator in such diverse departments as Public Policy, Development, Medical Center Administration, and Integrative Medicine. Now happily retired in Northeast Tennessee, he has also co-authored one book about baseball, contributed to two others, served as an associate editor on a third, and written an (as yet) unpublished historical novel about integrating the minor leagues in the early 1950s.