This article was written by Barry Codell

The homer hitter is the only player who scores or drives in a run without the assistance of a teammate. This new statistic gives the circuit clout full recognition.

Runs Tallied (“RT”) is a simple measure of offensive production (“tally” was Henry Chadwick’s term in the first box score). The team with the most runs tallied invariably wins the game; the player who tallies most for his team has been most valuable toward this victory.

Runs Tallied reinstates the primacy of the home run – the only scoring a player accomplishes without the aid of a teammate. It is based on the premise that all other runs are collaborative efforts. Virtually all team runs, aside from home runs, are a combination of a run scored and a run batted in (except for defensive lapses [“DL’s”] or double play grounders [“GIDP’s”], which score those runs not batted in). The batters or baserunners contributing to these runs are equally important; no run can exist without both of them. So a “non-homer” team run is generally ½ R and ½ RBI (occasionally ½ R and ½ DL), while a home run is one full run tallied.

The ultimate offensive payoff for team and individual is in Runs Tallied, as is shown by the following formula: [(R – HR) ± 2] + [(RBI – HR) ÷ 2] + HR = RT.  This formula separates the contributory tallies (runs and RBI) from the solo tally (home runs). This formula can be further reduced to:

Note that this simplified formula gives a credit of one RT for a home run, since a home run produces both a R and a RBI for the player. In other words, the simple averaging of runs and RBI results in Runs Tallied (RT). No computer – not even a calculator – is needed here.

The essence of RT is that home runs are already given their true doubled value when runs and runs batted in are added. The well-known “strength” of Runs Produced (subtracting homers or R + RBI – HR = RP) is actually its fatal weakness. Let’s go to two examples to see this:  the 1988 statistics of Kirby Puckett and Jose Canseco, and the all-time bests of Lou Gehrig and Babe Ruth.

Canseco’s 1988 supremacy is reaffirmed by the RT. His singular 40/40 season added up to 0.77 Runs Tallied per Game – the best in the majors.

Interesting applications of the RT could include RT/Team, RT/Game, RT/Plate Appearance, but what is undeniable is this: However gaudy the hitting or base-running, if a player does not tally runs, it’s all window dressing. For the score, after all, is the essential stat.

The comparisons, as with all statistics, are endless (see accompanying charts). Perhaps they will be done by a new generation of statisticians, without PC’s, armed only with baseball cards and minds, following this simple commandment: Average those runs and RBI! It’s all right there – in RT.

BARRY CODELL is a nursing home director in Chicago, winner of the Governor’s Award for Innovation in Gerontology, and the inventor of the base-out percentage (BRJ, 1979). 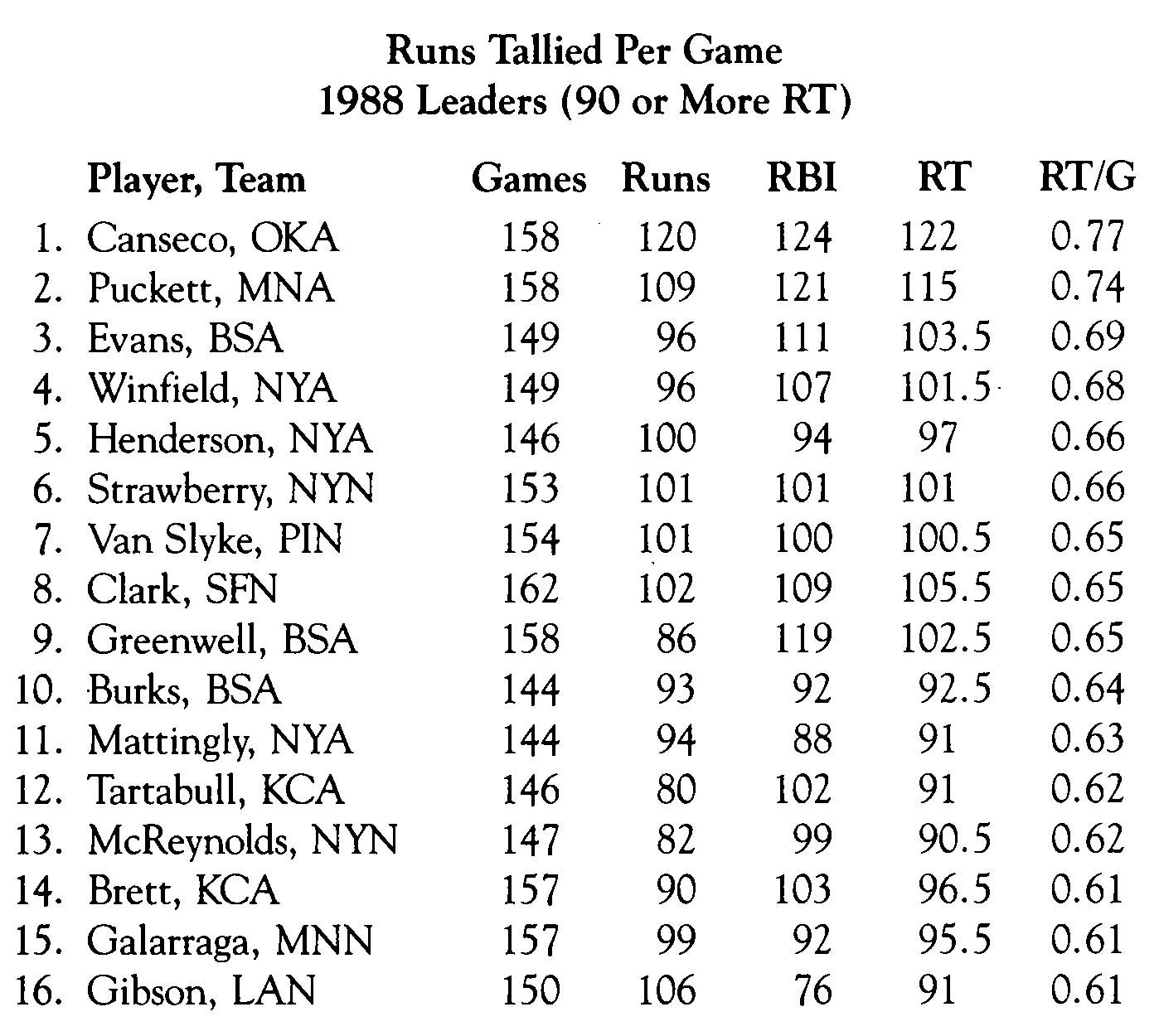 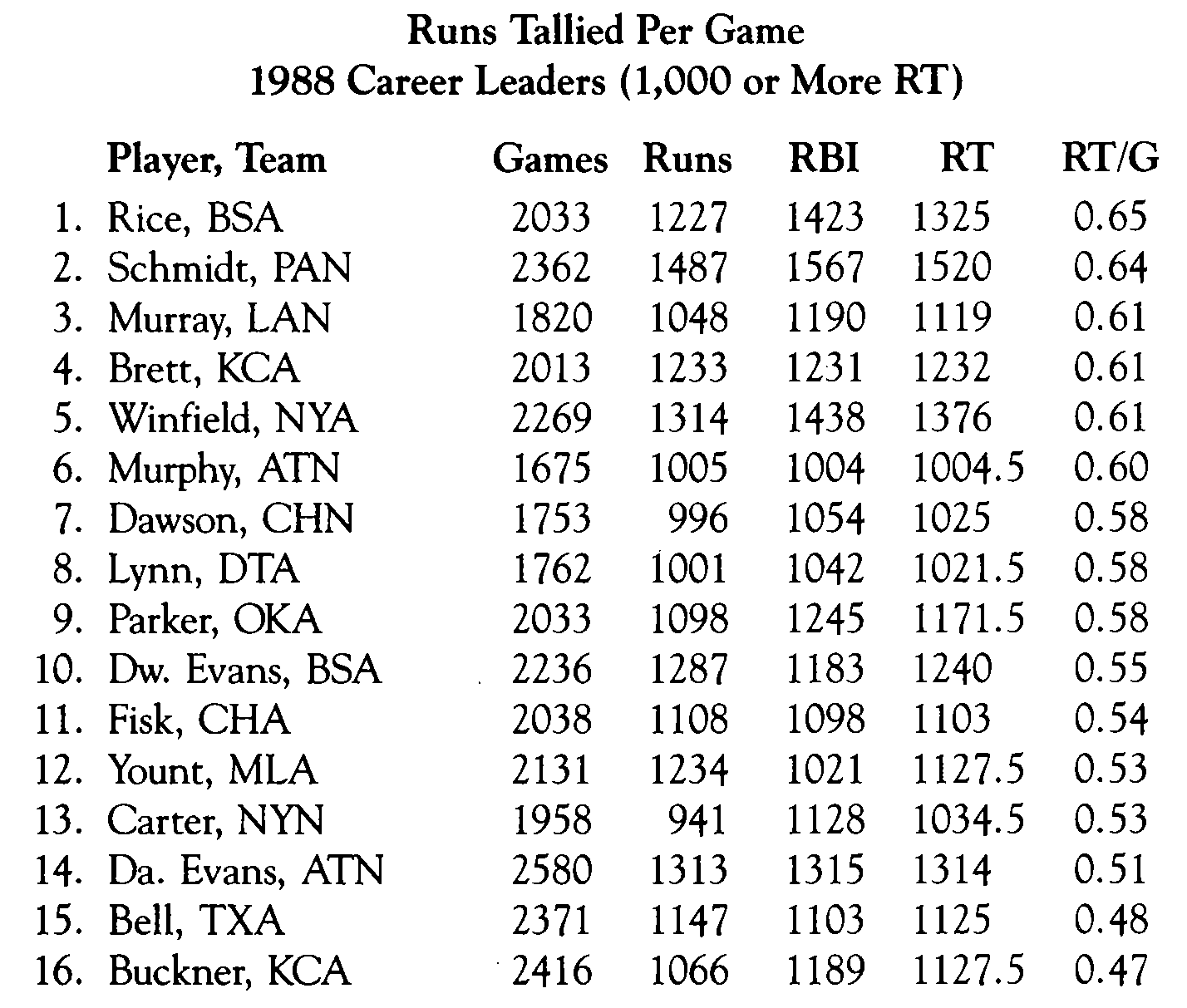 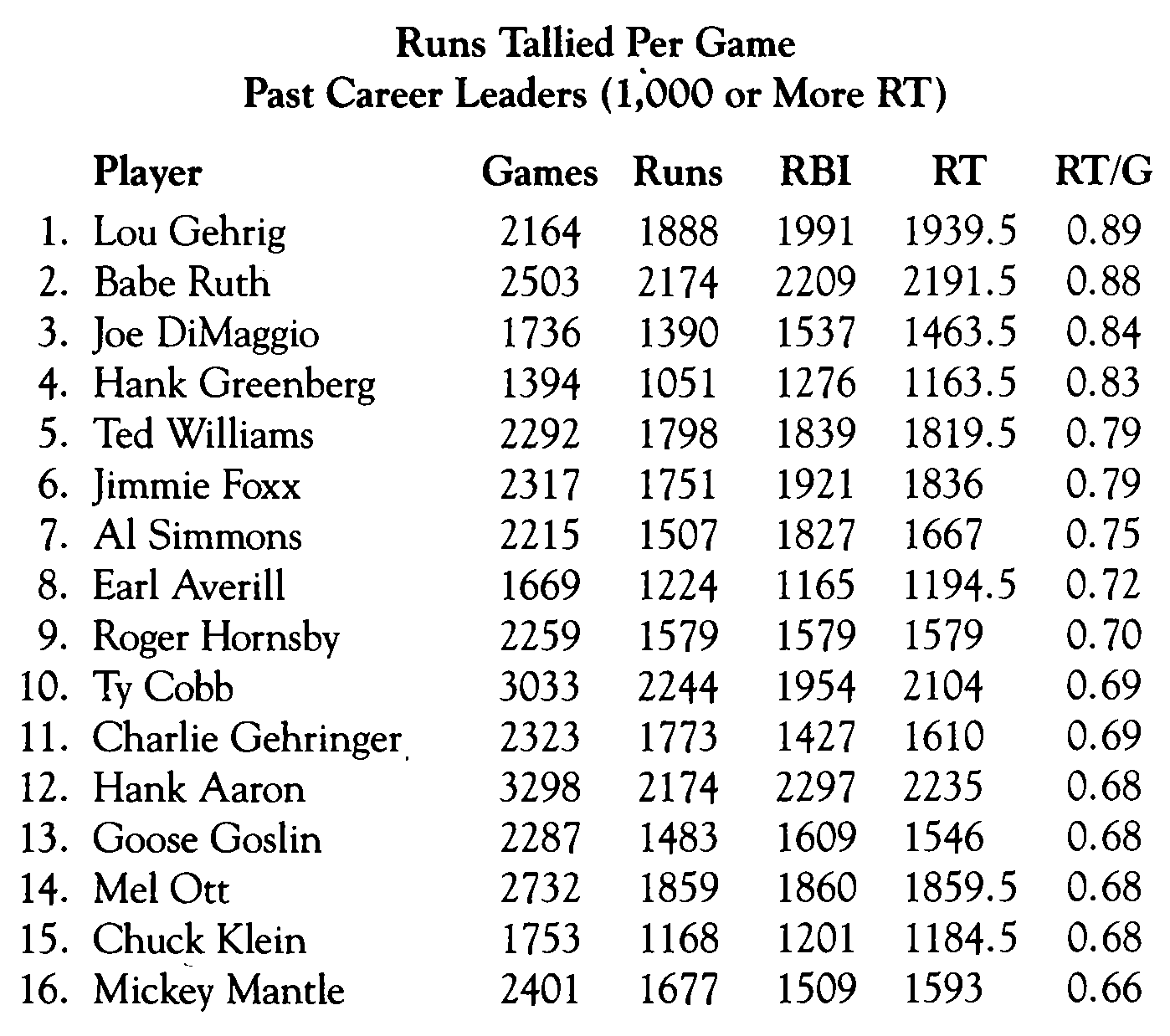