This article was written by Steve Walker

This article was published in The National Pastime: Monumental Baseball (Washington, DC, 2009) 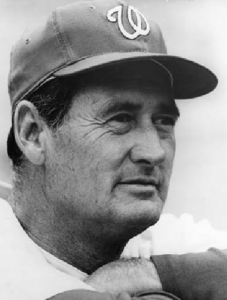 In 1969, his first season as manager of the Washington Senators, Ted Williams worked wonders. He gave instant celebrity status to a team formerly mocked and ignored, even in its own city. With essentially the same roster as the 1968 team that finished 65-96, the worst record in Major League Baseball, Williams’ Senators won 86 games in 1969. Only the world-champion New York Mets (73-89 to 100-62) showed greater improvement in the standings that season.1

Williams shook his Washington club out of the doldrums. The 86 victories marked the best record for a Washington baseball team since 1945. For the magic he worked during his first season in the nation’s capital, the Associated Press named Williams the 1969 American League Manager of the Year.

Under Williams, the team improved in nearly every statistical measure. The 1968 club had an on-base-plus-slugging percentage (OPS) of .623, 14 points below the league average. In 1969, Senators batters had an OPS of .708, 18 points above the league’s .690. The Senators drew 630 walks in 1969, compared to 454 the previous season. Even with the rule changes that lowered the pitcher’s mound and tightened the strike zone — and the addition of the expansion Seattle Pilots and Kansas City Royals — the Senators showed an astounding improvement of 176 free passes, more than one per game. Williams understood the power of the walk.

The pitchers improved under Williams as well. They listened to his daily spring-training sermons on hitting and used that knowledge against their American League opponents. In 1968, the Senators ERA of 3.64 was 66 points above the league average (2.98). The next season, Washington’s pitchers reduced their ERA to 3.49, 14 points below the rest of the AL (3.63).2

Relief pitcher Casey Cox explained how Williams helped him to outsmart hitters. “If you turn around everything he’s talking about hitting, if you can go 180 degrees, well you’re taking advantage of what he’s saying against the hitters. That’s the way I looked at it,” Cox said.3

Williams expressed his opinion of his 1969 team in the 1988 edition of his autobiography, My Turn at Bat. Yet few know what his players thought of their manager. A legendary, yet sometimes polarizing, figure, the men Williams led held a wide range of views about the Splendid Splinter. Some befriended Williams, others avoided him. Some thought him a genius, others a bad manager. Some felt he was a masterful communicator, others an ineffective leader. Some felt he was the world’s best hitting coach. Others believed his philosophies failed to work unless you possessed his unparalleled abilities. All enjoyed his enthusiasm — until it waned, when the team failed to repeat its fine 1969 performance.

Four men associated with Williams’s first team — outfielder Brant “Bruno” Alyea, catcher Jim French, pitcher Bob Humphreys, and radio broadcaster Ron Menchine — remember the friendships they forged with Williams. Alyea said, “Ted was a wonderful man. He took a liking to me and we talked on the planes a lot. He’d find me and say, ‘Come on over and sit down next to me, I want to talk to you.’

Unlike most players on the 1969 Senators, who respected and feared Williams too much to tease him, back-up catcher Jim French often engaged his manager in good-natured ribbing. French said, “Williams always made fun of my clothes. My retort was that he dressed like a bum-ratty sports coat, slacks and golf shirt. I always told him he must get his clothes free from Sears. He said, ‘Yep! And all my fishing gear, too.’”5 Williams, a longtime spokesman for Sears, received a handsome sum, as well as plenty of clothing, from the retail giant. Humphreys, a seven-year veteran by the time Williams arrived in Washington, also felt at ease around Teddy Ballgame. “I had no problems with him,” Humphreys said. “I would rag on him and he would give it right back. He would say, ‘The only thing dumber than a pitcher is two pitchers.’

“I would say, I’d like to have a job where I could fail six times out of 10 and be a star. You hitters make outs seven out of 10 times and think you’re good. I’d tell him, I’d have liked to pitch to you.

Menchine’s relationship with Williams began in spring training, 1969. As a first-year broadcaster, he was the junior member of the team headed by Shelby Whitfield, a club employee owner Bob Short dubbed “the Voice of the Senators.” Menchine interviewed Williams often and built a rapport with him. He said, “Ted was really a very easy guy to get along with, but he had a short fuse. So you knew when to stay away from him. You used discretion, let’s put it that way.”7

In contrast to those who befriended Williams, pitchers Darold Knowles and Dick Bosman respected their manager, but felt suspicious of his disdain for their ilk. Knowles said, “I say this with the greatest respect, he was probably the poorest manager I ever played for. I didn’t think he handled pitchers very well. He knew hitting extremely well and he felt like he knew pitching, but he knew [it] from the hitters’ standpoint. I don’t think when he first managed he understood the aspects of rest, that [you] can’t pitch a guy every day, and how to use pitchers. But he got better as he went along and [others] said he did learn to handle pitchers, so I think that’s a tribute to him.”8

Dick Bosman enjoyed his breakout year as a pitcher in 1969, compiling a 14-5 record. He gleaned tremendous knowledge from Williams. He said, “Most of what I know and have learned about the mental part of pitching, the cat and mouse game, so to speak, between the pitcher and the hitter, is what I’ve learned from Ted.”

He felt a bit shortchanged, however, by Williams’ reluctance to help him and the other pitchers improve their hitting. “If we would have had the chance to spend more time with Ted in talking about hitting and the mechanics of swinging the bat, I think a lot of us would have been a little bit better hitters. But, while he would talk to you about pitching, he kind of considered us non-athletes. We were banished to the back field to bunt and field ground balls while he spent hours and hours with the guys hitting on the other field in spring training. I’m not faulting him for that. It was kind of wishful thinking more than anything,” Bosman said.9

The men Williams led on the 1969 Senators also held contrasting views on his managerial abilities. Utility player Hank Allen felt Williams displayed exemplary leadership. He said, “His approach in dealing with people would have been equivalent to anybody in any corporation today that made them successful.”10

Senators star Frank Howard echoed Allen’s opinion. Howard remarked, “Ted Williams doesn’t show any partiality. I don’t care whether you’re hitting 45 home runs for him or you’re only hitting five. He’s going to treat you the way you should be treated. He’s going to treat you the way that you treat him. If you show him respect and you’re busting your [butt], shoot, Ted Williams will never say a thing to you. He’ll admire you.”11

Second baseman Bernie Allen and third baseman Ken McMullen held less lofty views on Williams’ abilities as a manager. McMullen said, “Ted Williams was not a good manager, except in [1969]. We were in such awe of him. He elevated our expectations and our ability.”12

Allen felt Williams communicated poorly with him. “Once when I was hot,” Allen said, “I expected to play. I didn’t expect not to be in the line-up. But then I didn’t get to take batting practice with the regulars. Ted was late getting the line-up in and he decided to play Lenny Randle at second base. It just about drove me crazy, things like that. Not getting to play for no reason.”13

Senators’ centerfielder Del Unser felt that Williams’ passion for managing waned somewhat after the 1969 season. He said, “I think after a while coaching there—because he was talked into it to begin with by Bob Short—he wasn’t as excited about it. [In 1970 and ’71] we were a bad club. Then [Short] made the deal for McLain and he was kind of a disruptive influence, trying to turn a lot of players against Ted. Some of the chemistry, the craziness, the fun was gone. So were some of Ted’s instinctive moves. And not winning. I think he just got tired of it a little bit.”14

Most of the 1969 Senators credit Williams for their marked improvement in hitting and getting on base that season. They note how Williams emphasized the mental aspects of hitting, how to outthink and prepare better than the opposing pitcher. Unser, who improved his OPS from .560 in 1968 to .731 in 1969,15 recalled Williams’ rapid-fire instructions.

“He imparted so much knowledge, directly and indirectly. Later, I became a hitting coach and I used a lot of his theories.”16

Williams transformed Howard’s approach to hitting as well. Howard improved his OPS by 86 points from 1968 to 1969 (.890 to .976).17 Howard said Williams helped him discover a hitting epiphany during spring training. “He took a completely undisciplined hitter with an enormous strike zone and tightened the strike zone up. I went from 54 walks to 132 walks in two years without it taking my aggressiveness away. It made me more disciplined at the plate. My value to the ball club went up. I scored runs. I drove in runs and my on-base percentage went up.”18

Williams proved he could work with singles hitters as well as sluggers by the transformation he wrought in Senators shortstop Ed Brinkman. A notoriously weak hitter, Brinkman never had a batting average above .229, until Williams arrived. Using an altered approach where he attempted to hit line drives and grounders instead of home runs, Brinkman raised his batting average to a career-high .266.19

“It was constant. He was always around the cage and you couldn’t mess around. A lot of times during [batting practice] we used to goof off a little bit, but when Ted was around the cage, you didn’t do that. He was strictly business around the hitting cage.”20

The late Arthur Lee Maye, who joined the Senators via a trade with the Cleveland Indians in June 1969,21said, “Ted would talk about hitting all night. Ted was a student of hitting. He studied the pitchers. He studied the ball. He tried to keep the edge on his side.”22

McMullen argued that Williams failed to understand that his players lacked his talent and stature with the umpires. “He would always tell us to take the first pitch, but, like Frank Howard said, that’s fine for Ted Williams, he didn’t get too many called strikes. That approach might not work for mere mortals.

“Ted did get us to think a lot more about who we were facing and our approach to hitting. Ted would say, ‘You got a good swing.’ He instilled confidence.”23

The 1969 Senators agreed Williams possessed an uncanny ability to motivate and inspire. Knowles said, “He was a guy I couldn’t wait to get to the ballpark to listen to. He was the most interesting, charismatic man I’ve ever been around.”24

Howard echoed those sentiments. “I’ve met a lot of great individuals in my lifetime. But, I’m going to tell you, Ted Williams is his own man. He’s very charismatic. He’s electric. I don’t care whether it’s at a ballpark, a banquet hall, or wherever it is, he’s going to light that room up.”25

With his strong, larger-than-life personality and ironclad opinions, Ted Williams made it impossible for others to stay neutral about him. Some remember him fondly, others would rather forget him. Yet, in 1969, Williams inspired a team that knew only losing to play the best baseball Washington had witnessed in the last forty years.

You can read more about the incomparable Ted Williams and the 1969 Senators in Steve Walker’s book, A Whole New Ballgame: The 1969 Washington Senators (Clifton, Va.: Pocol Press [www.pocolpress.com], 2009).