“The grandest game ever played,” wrote Henry Chadwick in the Clipper after the 1877 season. He was referring to the contest of May 1 that year between the Syracuse Stars and the St. Louis Browns of the National League. The Stars, also called the “Twinklers,” were a strong independent club featuring slugger Dick Higham from the old New York Mutuals.

Many baseball patrons called it the most remarkable game ever recorded. The two teams battled to a 15-inning, scoreless tie. Never had two teams played so long without scoring.

The newspapers of the day congratulated fans for having witnessed “a game of heavy batting, splendid fielding and universal brilliancy of play.” The St. Louis club reached Star twirler Harry McCormick for seven hits while the Twinklers managed only two of the deliveries of Tricky Nichols. The closest either team came to scoring was in the eighth inning. A sparkling catch and strong throw by the Stars’ Pete Hotaling caught Davy Force of the Browns as he tried to score from third base after the catch.

Historically, the game meant more to the Stars than the Browns. The St. Louis team was in its final year as a National League member, but glory days and Chris Von der Ahe awaited the city in the American Association.

With this game, Syracuse served notice that it could play in a “fast” league. For three and a half years the Stars were among the top seven or eight teams in the country. McCormick’s fast curve, a pitch he learned from Will White during a tournament in Watertown, N.Y., in 1875, accounted for 142 victories in only three years. The greatest foe for McCormick was his temper, which later resulted in his being blacklisted from professional baseball. It was that sort of undisciplined self-indulgence, characteristic of the times, that put an end to the Stars as a National League team after one season (1879).

Here is the box score of the game that put Syracuse on the baseball map: 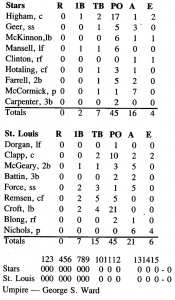 Postscript: Ironically, two weeks after the St. Louis-Syracuse game, Harvard and Manchester played to a 24-inning, 0-0 tie. They used a softer, duller ball called a “mush.” The game served as a cause celebre for the advocates of a standardized ball.