This article was written by John Schwartz

This article was published in the 1981 Baseball Research Journal

The sacrifice fly was a part of major league baseball, off and on, for 36 of the 65 seasons before 1954, when it became, for the first time, a separate item in the official statistics. It has had a very checkered history and the reader may have trouble understanding or even following the various changes.

In 1889 the entry “sacrifice hit” first appeared in baseball box scores. During the 1889-1893 seasons, players received credit for advancing baserunners on bunts, ground outs and fly balls. Batters were not exempted from an official team at bat when credited with a sacrifice.

Beginning with the 1926 season, a more liberal version of the sacrifice fly rule was instituted. The basic provision was that any players who hit fly balls advancing runners to second and third were credited with sacrifices; no time at bat was charged for a sacrifice. After the 1930 season, during which the collective batting average of the major leagues exceeded .290, the sacrifice fly rule was eliminated. John B. Foster, the editor of the 1931 Spalding Official Baseball Guide, in discussing several rule changes made that winter, commented:

Last, but by no means least, the sacrifice fly was wiped out of the game. Argument over this play has been interminable, and always could be, but the Rules Committee wisely concluded that a sacrifice meant something more than swinging for a home run and knocking a fly long enough to permit a runner to score from third. The batter undoubtedly might mean to bat the long fly, but he would not decline a home run if he could get one, and batting home runs hardly comes under the category of sacrifices.

The next chapter in the sacrifice fly story occurred after the 1953 season. As reported in The Sporting News:

When the rules committee, at its meetings in New York, November 2 and 3, restored the sacrifice fly, the group eliminated an inequity in the code that never should have been permitted. There is no adequate reason why a batter who drives in a run with a long fly that sends a fielder back to the wall should be charged with a time at bat, while another who dumps a dinky bunt into the infield to score a runner should have the time at bat eliminated.

The sacrifice fly rule has remained unchanged to the present day. There is still some uneasiness about the sacrifice fly in the minds of rule makers. This is reflected in Rule 10.24, (a) and (b). A sacrifice fly is treated as if it were a hitless official time at bat with respect to consecutive hitting streaks and consecutive-game hitting streaks. This is not the case for the other four categories of plate appearances — bases on balls, hit batsmen, defensive interference, and sacrifice bunts — that are not charged as official at bats.

Beginning with the 1954 averages, sacrifice bunts and sacrifice flies were listed separately in the official averages (AL pitching statistics did not separate SF from SH yielded until 1955). For this reason, most of the statistical information on sacrifice flies is restricted to the 1954-80 period. Some research has been done on earlier seasons; for example, SABR member Pete Palmer has determined that the three sacrifices credited to Ted Williams in 1939 were all SF. The Sporting News Record Book lists Pie Traynor of Pittsburgh with 31 SF in 1928 under the rule crediting a batter with a sacrifice for advancing a baserunner on a fly ball; Charles (Chick) Gandil of Washington and Sam Crawford of Detroit, both with 16 scoring SF in 1914, as the American League record holders for right- and left-handed batters respectively for SF in one season; and four batters, including two from before 1 954, with three scoring sacrifice flies in a single game: Harry Steinfeldt, CHI N, S MAY 1909; Bob Meusel, NY A, 15 SEP 1926; Ernie Banks, CHI N, 2 JUN 1961, in a night game; and Russ Nixon, BOS A, 31 AUG 1965, 2nd game.

Since the introduction of the DH in the American League, offensive production has increased, and along with it, the frequency of the SF. The AL batting pct. since 1973 is .2626, and 1/125 plate appearances results in a SF. Without the SF rule, the AL would have hit .2602. For the NL, the batting pct. over the last eight seasons has been .2573 (.2551 without the SF) and the incidence of SF is 1/136 plate appearances.

The increase in the frequency of the sacrifice fly in both leagues may have more to do with changes in defensive baseball than with changes in the offense. Gloves are larger, and the one-handed style of catching fly balls has increased in popularity among major league outfielders. A fielder can get off a throw more quickly after a two-handed catch than after a one-handed grab after which he must first bring his bare hand to the glove before throwing the ball to the catcher.

Three of the tables accompanying this article deal with batting leaders; two detail the season leaders in the AL and NL each year from 1954 to 1980; the third is a list of batters who have hit 55 or more sacrifice flies in their careers since 1954. Brooks Robinson led or tied for the American League lead 4 times in his long career; Ron Santo and Johnny Bench have both managed to lead or tie for the NL lead 3 times. Gil Hodges, Jackie Jensen, Minnie Minoso, Dave Johnson, and Mike Schmidt, as well as Robinson and Bench, have managed to lead their league for two consecutive seasons.

Hank Aaron’s 121 SF is the best lifetime total; 113 of these were hit in the NL, and that total is a record for the league. Brooks Robinson’s 114 set the AL record. Rusty Staub’s 106 are the most by a left-handed batter, and Reggie Smith’s 81 is the best total for a switch hitter.

Gil Hodges hit 19 sacrifice flies in 1954, and this total remains the record for SF in a single season. The American League record is 17, set by switch hitter Roy White of the Yankees in 1971. Reggie Smith hit 13 SF while playing for the Dodgers in 1978. This is the NL record for switch hitters. Willie Montanez’s league leading total of 13 SF in 1971 set both the major league record for rookie batters and the National League standard for left-handed hitters. Leo Posada set the American League record for rookies when he tied for the league lead with 12 SF in 1961.

Among pitchers, Bob Gibson of the St. Louis Cardinals had 18 sacrifice flies during his career, which is a record for hurlers. Warren Spahn had 14, although the sacrifice fly rule was not in effect during the first nine seasons of his career.

Amos Otis hits sacrifice flies most frequently, averaging one every 85 plate appearances. His lifetime batting average would be four points lower if it were not for the SF rule. Pete Rose, who only averages one SF for every 216 trips to the plate, would only lose between one and two points from his average. Rose went through the entire 1973 season, 752 plate appearances, without hitting a SF, which is a record. Hank Aaron would have hit .302 without the SF rule; Willie Mays would have a lifetime batting pct. of .299 without it. 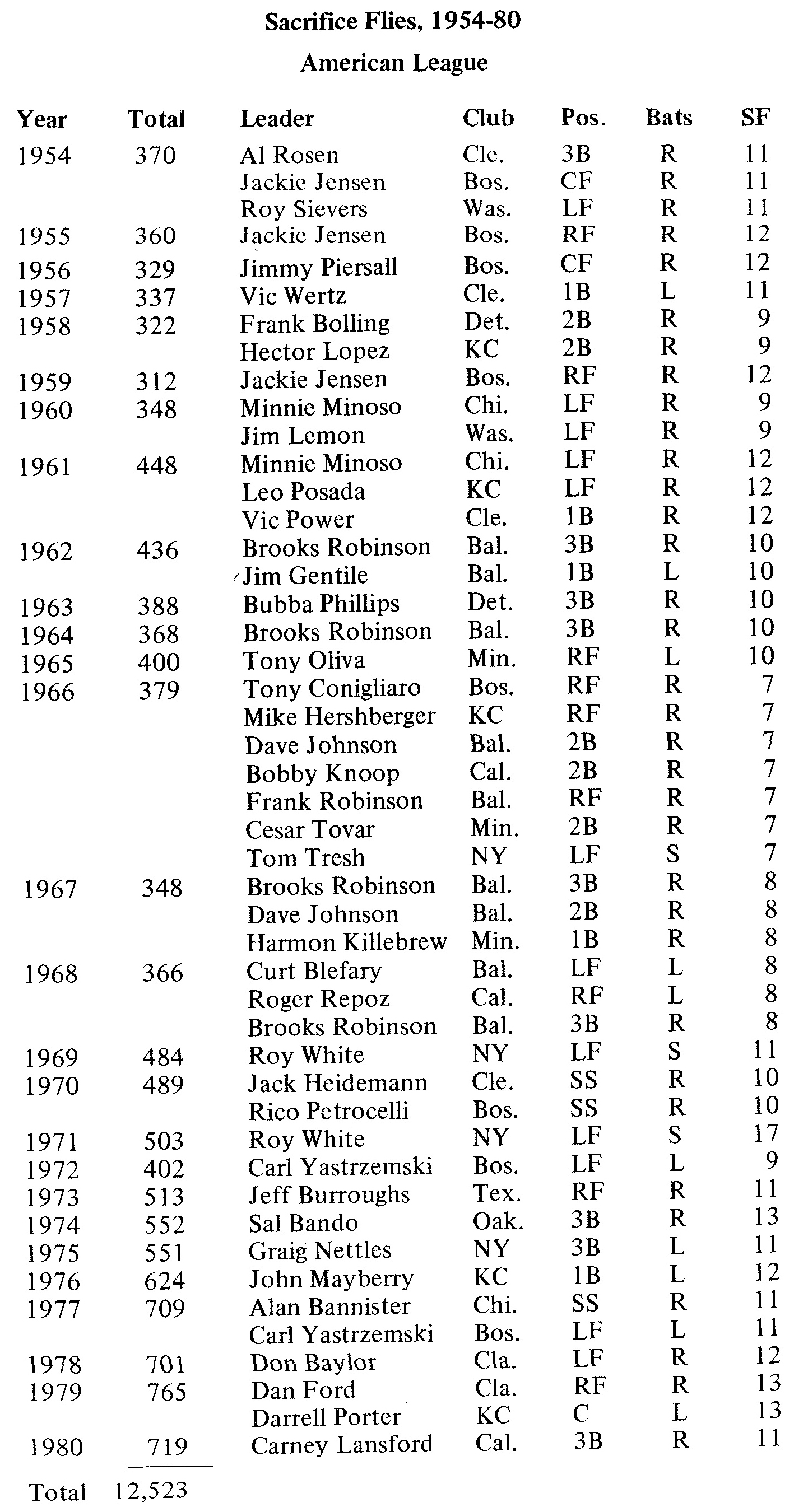 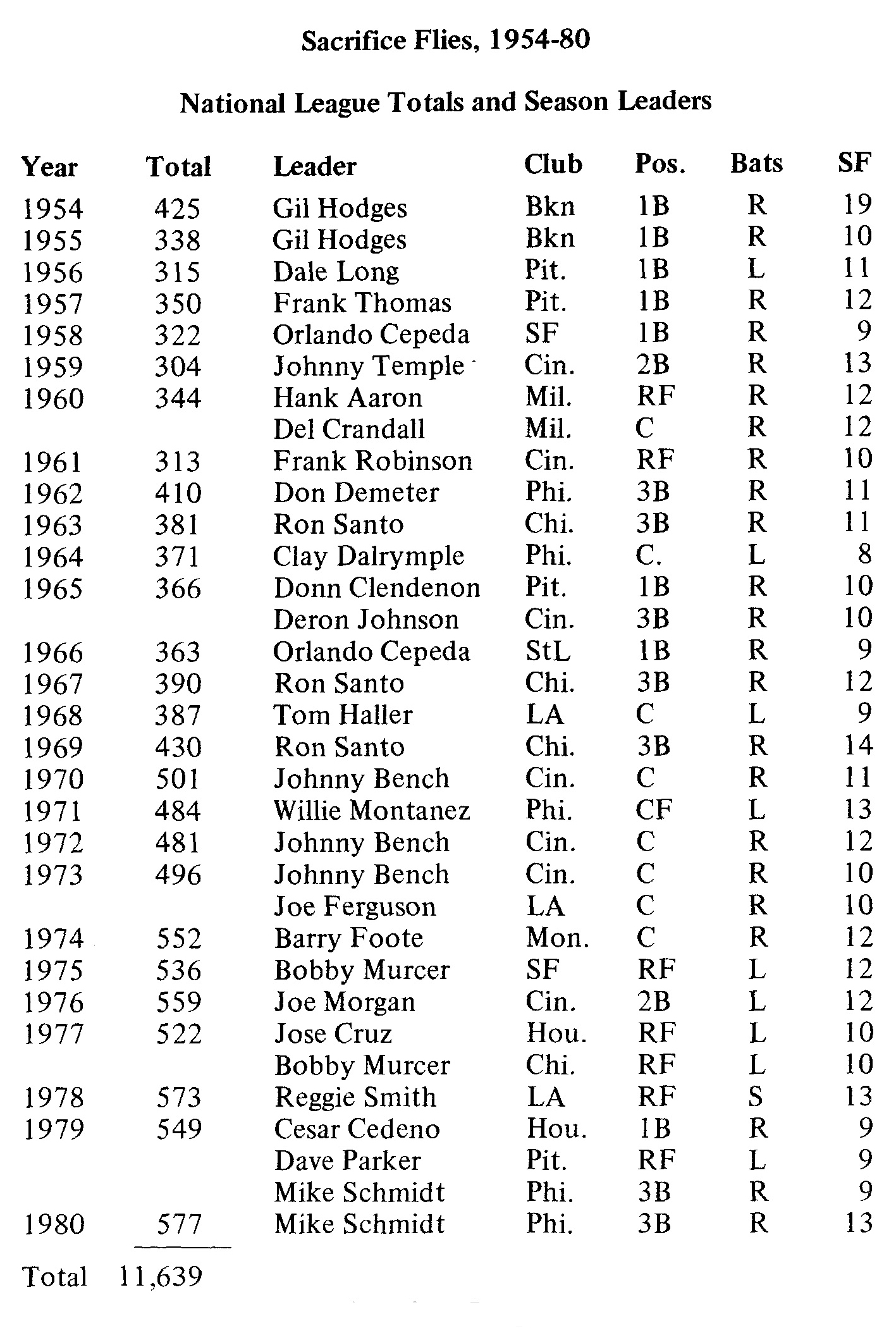 The fourth table accompanying this article details the records of the pitchers who have faced the most batters since 1954. All of the listed hurlers spent or have spent most of their careers as starting pitchers. The pitchers are rated according to batters faced divided by sacrifice flies yielded. The author is indebted to Pete Palmer, who separated sacrifice bunts from sacrifice flies yielded for pitchers in the American League in 1954. These totals were lumped together in the official averages.

Billy Pierce, who faced 8648 batters after the reinstituting of the SF rule, yielded only 25 SF during his career, including four in 1954. This works out to a ratio of 346 BFP per SF, like Koufax and Ford, Pierce was a left-handed pitcher.

Phil Niekro, who faced 1143 batters in 284 innings in 1969, set the major league records for BFP and IP in a season without yielding a sacrifice fly. The Atlanta pitcher topped the totals achieved by Cleveland right-hander Luis Tiant in 1968. Tiant pitched 258 innings, facing 987 batters, without giving up a SF.

The scoring sacrifice fly rule has remained unaltered now for 27 consecutive seasons. While it may be questioned why a bunt must merely advance a runner, and a fly must score a runner, to be recorded as a sacrifice, there does not seem much agitation to apply consistency to the sacrifice rule by restoring the SF rule in effect from 1926 to 1930. For that matter, ground balls hit behind baserunners (Jim Gilliam was noted for this) are not recorded as sacrifices either. The sacrifice rule is uneven. Unless batting averages undergo a dramatic rise, however, the SF rule, imperfect as it is, will probably remain on the books. 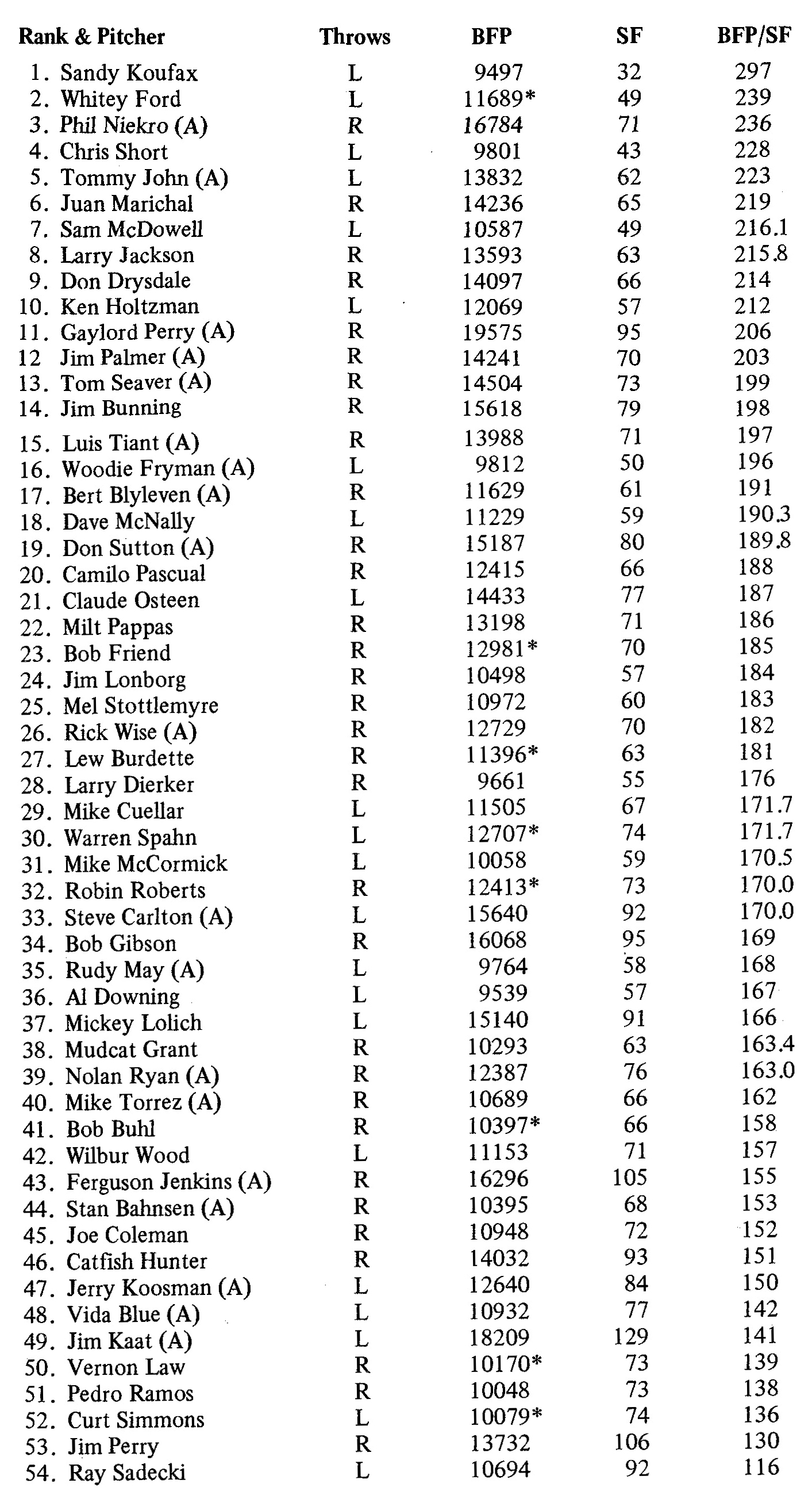