This article was written by Barry Mednick

Alex Sanchez went to the plate 207 times before drawing his first base on balls. Craig Robinson of the 1973 Phillies set the record for most at-bats in a season (146) without a walk.

Alex Sanchez of the Detroit Tigers set a record in 1985 that went overlooked by the game’s record-keepers. While hitting the rather impressive total of six home runs in just 133 at-bats, the Tigers’ rookie outfielder failed to draw a walk during the entire season. This meant that Sanchez, who had brief trials with the Philadelphia Phillies in 1982-83 and with the San Francisco Giants in 1984, had gone to the plate 195 times in the majors and had yet to receive a base on balls – a record number of appearances without gaining a pass.

Despite his apparent power, the Tigers traded Sanchez to the Minnesota Twins early in 1986, and he extended his streak of at-bats in the big leagues without a walk to 207 before Dennis Rasmussen issued him a pass in the sixth inning at Yankee Stadium on May 1.

Sanchez actually came close to breaking his walkless streak late in the 1985 season. Manager Sparky Anderson, aware of Alex’ failure to gain free transportation, urged him to take more pitches. In a game played after the Tigers were eliminated from pennant contention, Sanchez came to bat with the bases empty and ran the count to three-and-one. Sparky and his coaches became ex cited. It appeared Alex’ first big league walk was only a pitch away.

With the take sign on, Sanchez watched a pitch go by about eye level. The umpire nevertheless called it a strike. Outraged by the call, Anderson left the dugout to protest, an action that normally merits ejection. But the umpire was confused. He couldn’t understand why Sparky would complain about a missed strike call on one of his own batters, especially at a dull point in a game that didn’t matter. Sanchez had the take sign for the next pitch as well. That one was right over the plate and had to be called a strike.

Sanchez’ 133 at-bats in `85 do not represent the record for most plate appearances in a season without walking.

That distinction belongs to Craig Robinson for his 1973 season with the Phillies. He had 146 at-bats and no walks that year.

A list of players with the largest total of at-bats in one season without drawing a base on balls follows:

Except for Sanchez, it’s not difficult to see why this group of players did not walk. With their anemic batting averages and absence of power, pitchers would hardly hesitate to throw them strikes. If you were the manager and your pitcher walked Craig Robinson, would you leave him in the game? Not without a five-run lead.

The average major leaguer walks once for every ten at-bats, or about once every two and one-half games. The great players walk twice as often. Ted Williams had a career ratio of less than four at-bats for each walk.

Following is a list of all players in this century who had an at-bats to walks ratio of 100 to one or greater for a season, for two consecutive seasons or for their career: 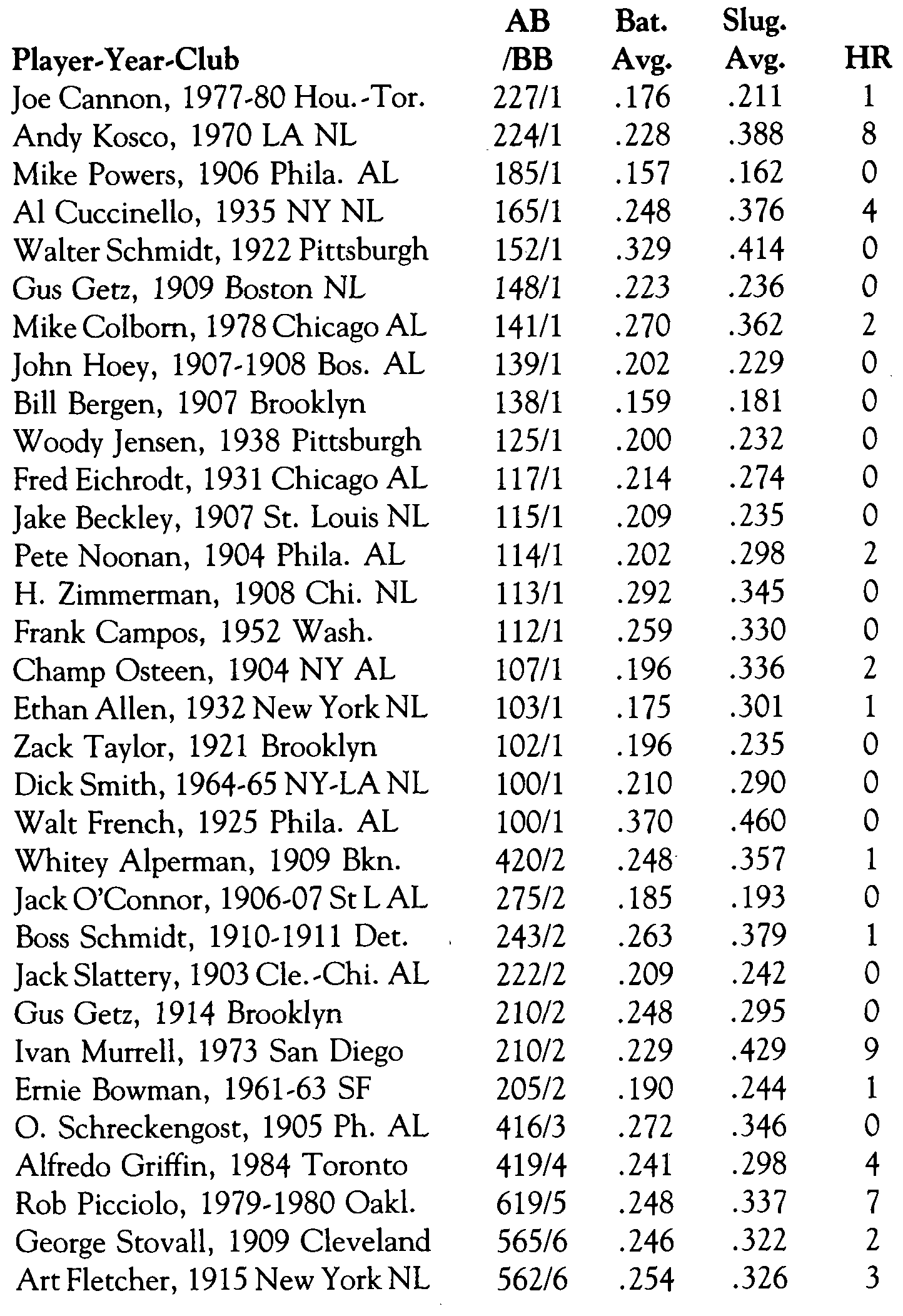 The last two – George Stovall and Art Fletcher – do not quite qualify, but they have the most at-bats with six walks. Most of these hitters are of the Rob Picciolo low-average, no-power type. Pitchers love these guys because they have little to fear. The chances of giving up more than a single are very low.

The pre-1910 statistics should probably be ignored. Baseball was played differently during that era, with few home runs, numerous stolen bases and a one-run-an-inning philosophy that contrasts greatly with today’s game. Also, the value of a base on balls was not as well understood. Since 1910, the 100-to-one ratio has occurred no more than six times in a decade and did not occur at all in the years 1939-1951.

The exploits of Picciolo are remarkable. He played in 210 games in the years 1979 and 1980. He had already established his reputation as a non-hitter. Yet he was allowed to bat more than 600 times in those two years while accumulating a mere five walks or one every 42 games. It is quite possible that Picciolo or Whitey Alperman or Alfredo Griffin actually went as long as 300 at-bats between bases on balls.

Alex Sanchez does not fit this stereotype. In spite of his low average he is a power hitter, and power hitters draw walks, lots of them. The only players on the list who resemble Sanchez are Andy Kosco and Ivan Murrell, two journeyman players with ten major league seasons averaging less that 200 at-bats a year. Both hit .236 and showed some power. Sanchez’ lack of patience at the plate may have damaged his career as well.