Unique among major sports, baseball awards no home-field advantage to the team with the best regular-season record. An analysis of the results and a plea for change.

ONE OF THE THINGS that makes major-league baseball such a great pastime is that only winners play the postseason. Over a 162-game schedule, a team must be the best in its division before advancing to the League Championship Series.

Unlike basketball and hockey, whose teams play for six months to eliminate a handful of potential playoff entrants, or football, with its absolute tie-breaking system for teams with equal records, baseball has but one qualification: win your division.

But is there a chink in the armor? Whereas the NBA, NFL, and NHL have several inequities in their playoffs, they do reward their better teams with something that is not found in baseball – the home-field advantage for teams with the best regular-season records.

With only two teams from the National and American Leagues qualifying for the LCS, there is just a 50-50 chance that the team with the better regular-season record will have the home-field advantage for the LCS because of the alternating sequence currently in use. This method gives the NL East and AL West leaders the home-field advantage (HFA) one year and the NL West and AL East champs the HFA the following year.

After clubs have finished a grueling six-month schedule through a variety of seasonal weather, baseball should reward those with the better won-lost records with the home-field advantage in the LCS. Why should the 1973 Mets (82-79) have been given the HFA when their playoff opponent, the Reds (99-63) were far superior over the regular campaign? Yet thirteen years later, those same Mets (108-54 in 1986) would be on the short end against the Astros (96-66).

There is some good news for dominant teams: Of those that won one hundred or more games in the regular season but were not fortunate to have the HFA in LCS play, only two failed to advance to the World Series. Also, seven of eleven 100-game winners who did have the HFA won their league’s pennant. This is indicative of these teams’ overall strengths and fine play against their LCS rival regardless of who had the HFA. The strongest single year for all playoff participants was 1977, with three clubs (New York Yankees, Royals, and Phillies) all winning at least 100 games and the Dodgers winning 98.

The essential factor in determination of which club should have the HFA should be “Who had the better record during the regular season?” When necessary, tie-breaking criteria should be established by record versus the LCS opponent during the regular season and runs scored/runs allowed differentials. However, in twenty years of playoffs, no two opponents have ever entered league-championship play with identical records, thereby limiting the need for tie-breakers and facilitating the selection of the team worthy of the HFA.

For clubs that clearly dominated their playoff opponent during the regular campaign, some found that when October rolled around they did not repeat success. Only ten of seventeen teams who had at least twice as many regular-season victories as losses against their LCS rival went on to win the pennant, and only three of these teams had the HFA. Noteworthy upset victims include the 1988 Mets, the 1983 Dodgers, and the 1971 Giants. 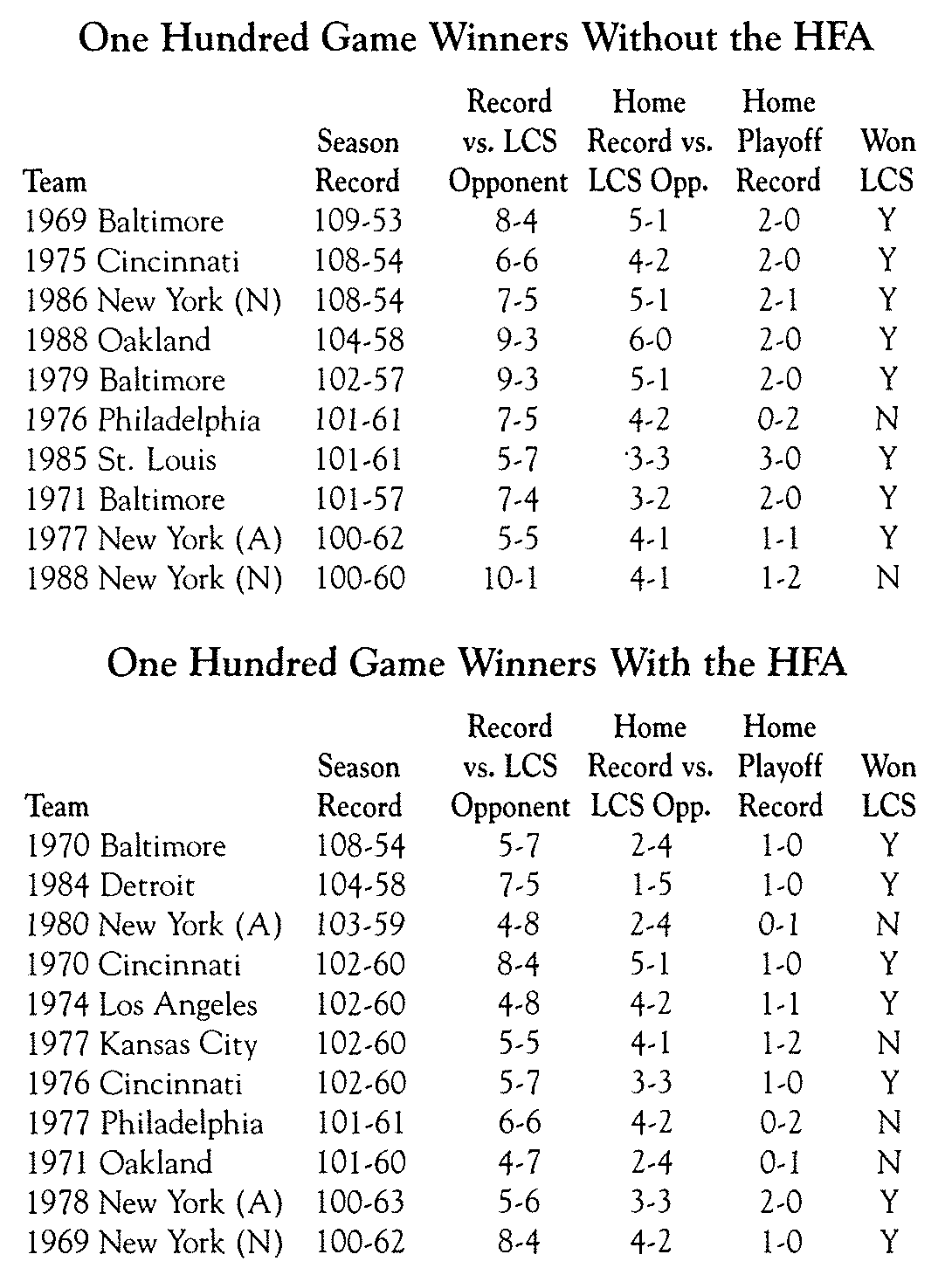 Based on performance in both halves of the strike-shortened 1981 season, only two of the four series had the team with the best record enjoying the HFA. This is open to debate because of the disparity in total number of games played during that year. This also occurred in 1972 when the Pittsburgh Pirates went 96-5 2 but ceded the HFA to the 95-52 Cincinnati Reds. In the American League the home team won only twice, but in the Senior Circuit host clubs lost just once. 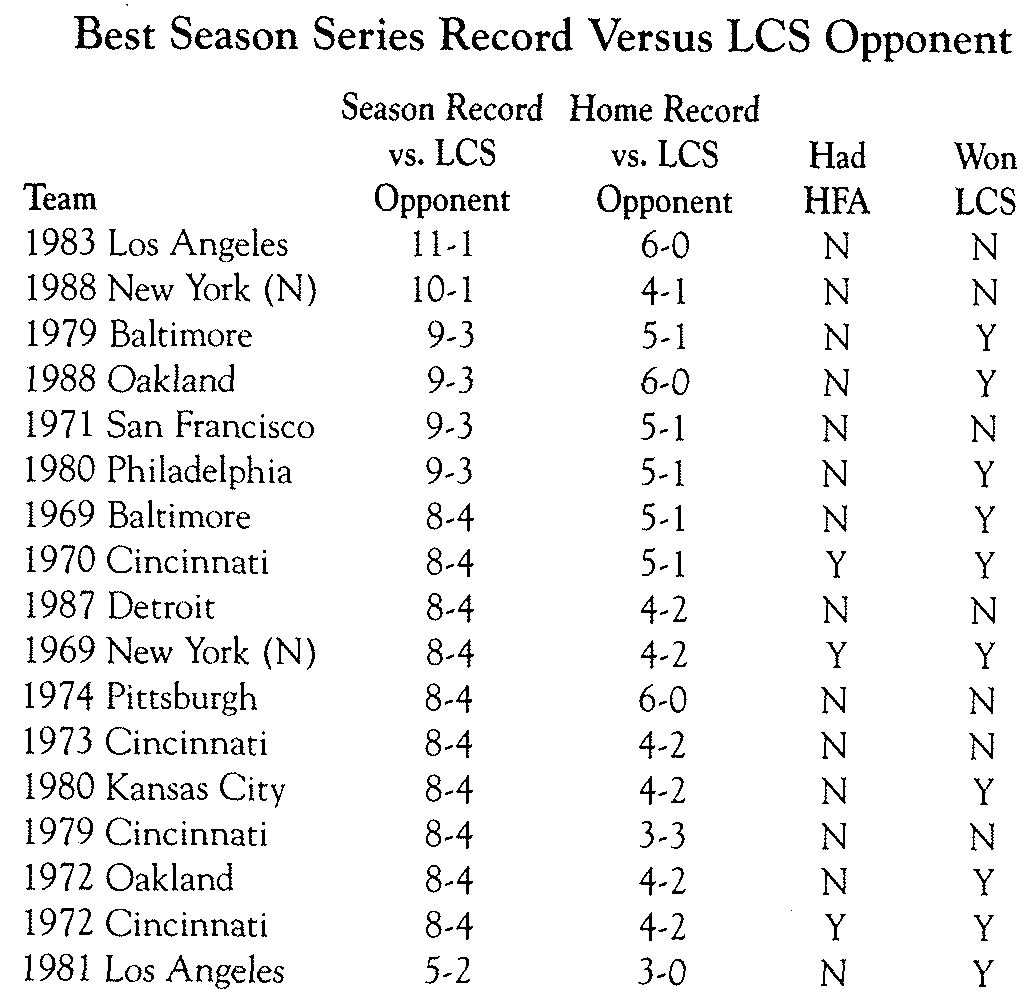 In playoff series that went the full five games (up until 1984) or seven games (since 1985), the home team won nine of fourteen. However, only four of nine victors deserved to have the HFA on the basis of their record. Among teams that lost that last game, three of five deserved the HFA. 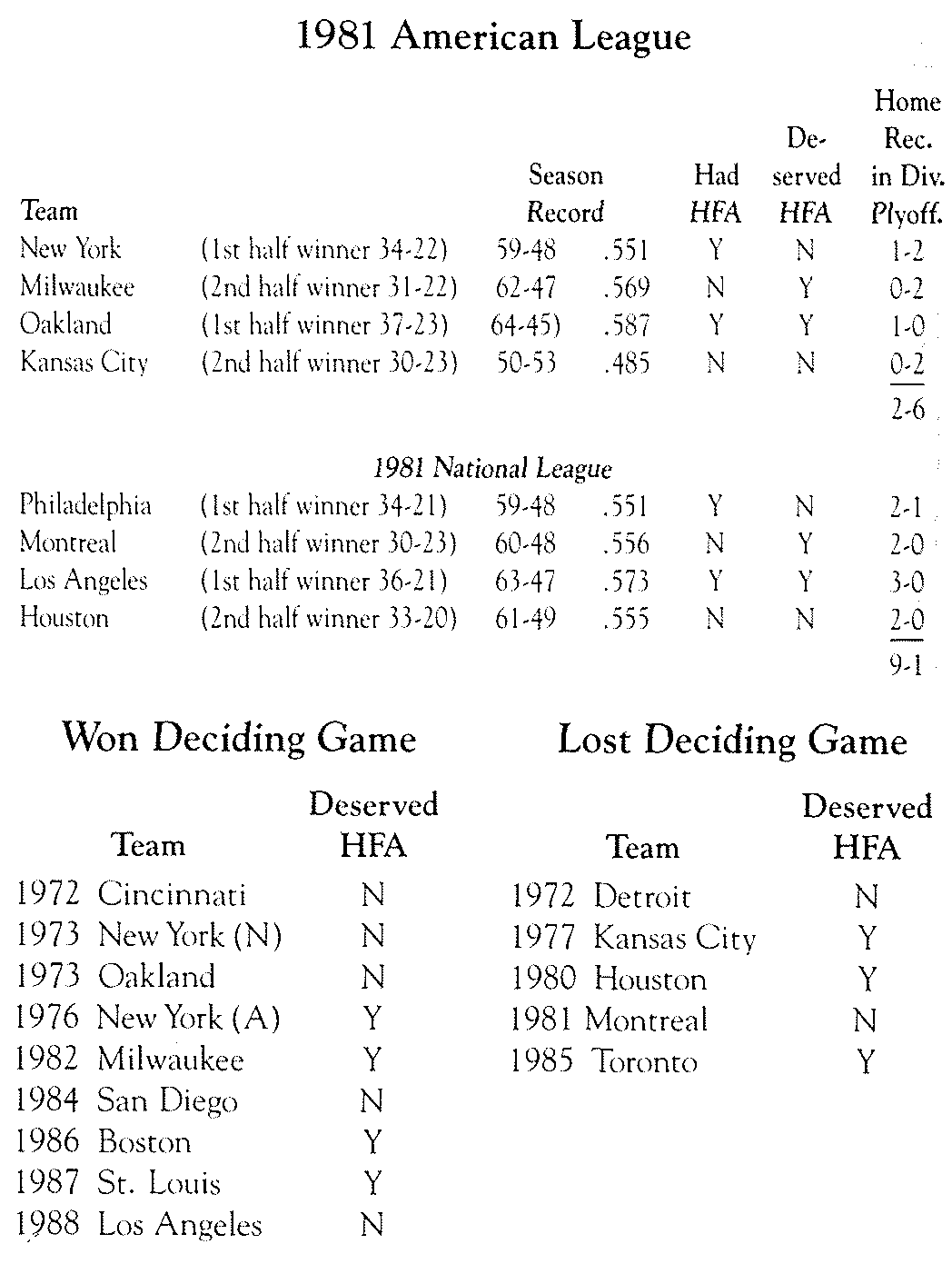 Teams with the home-field advantage are not guaranteed to clinch their league’s pennant, hut the leagues should uphold the teams who have proven themselves over the course of the regular season.

In the forty league championship series that have been played, only twenty-three teams that earned the HFA with their record actually had it in the LCS. Furthermore, only fourteen league champions had the best regular season record, with those teams compiling a collective 23-5 record in home playoff games. On the other hand, the remaining nine who had the best regular season but lost their LCS were a poor 4-15 at home in the playoffs.

It is the responsibility of a team to take advantage of every opportunity that it can, but no one should be denied the HFA simply because it is not that team’s “turn to have it. ” Fourteen of twenty-three clubs, or sixty-one percent of the teams, who deserved the home-field advantage by right of a superior record won their league championship series. That number should increase if more teams are given their due on merit, based on the high winning percentage (23-5, .821) of those teams listed above.

Two decades of playoffs have provided us with a multitude of great games, memorable plays, heroes, and villains, but compared to its other sporting brethren, baseball has some catching up to do when the home-field advantage is at stake. 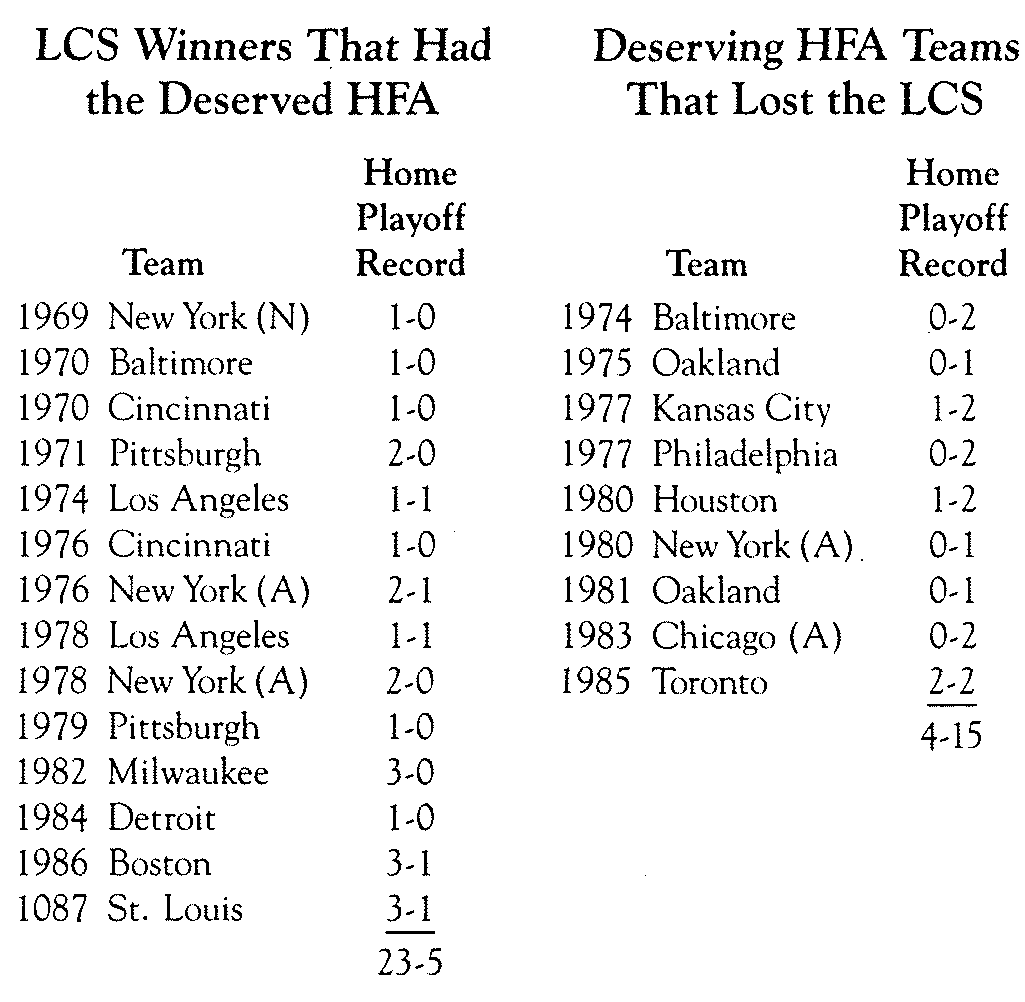 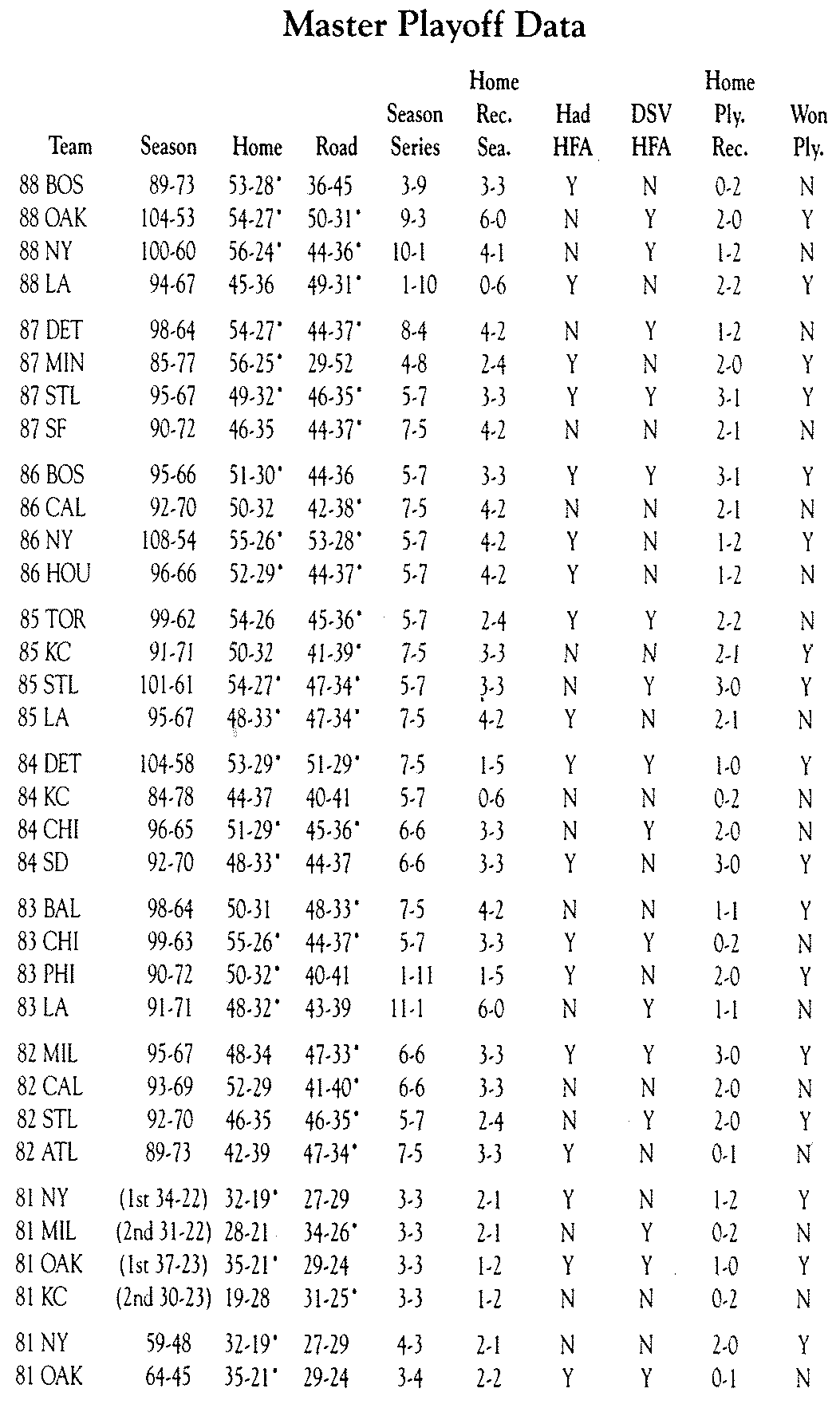