This article was written by Robert A. Murden

This article was published in 1986 Baseball Research Journal

65 players have had 80 or more extra-base hits in a season. Lou Gehrig did it ten times and Babe Ruth nine. Only once since 1941 have four achieved the feat in the same year.

Every fan has an idea of which players qualify as sluggers and which do not. Any definition of slugger would include Babe Ruth, and none would mention Ray Oyler. Beyond this simple level, how are sluggers ranked and what is a good statistical indicator of a top slugging season?

A .600 slugging percentage, 40 home runs or 130 RBIs might be considered definitions of excellence in slugging. Amazingly, however, one other impressive slugging feat has been accomplished less often than any of these. In all of major league history only 65 players have produced at least 80 extra-base hits (EBH) in a season, achieving this level a total of 133 times (yes, Ruth did and no, Oyler did not). An examination of these superachievers discloses some surprising names, with more McRaes than Mantles, and an analysis of their characteristics can be applied to predict who will be the best of these complete sluggers in the upcoming decade. 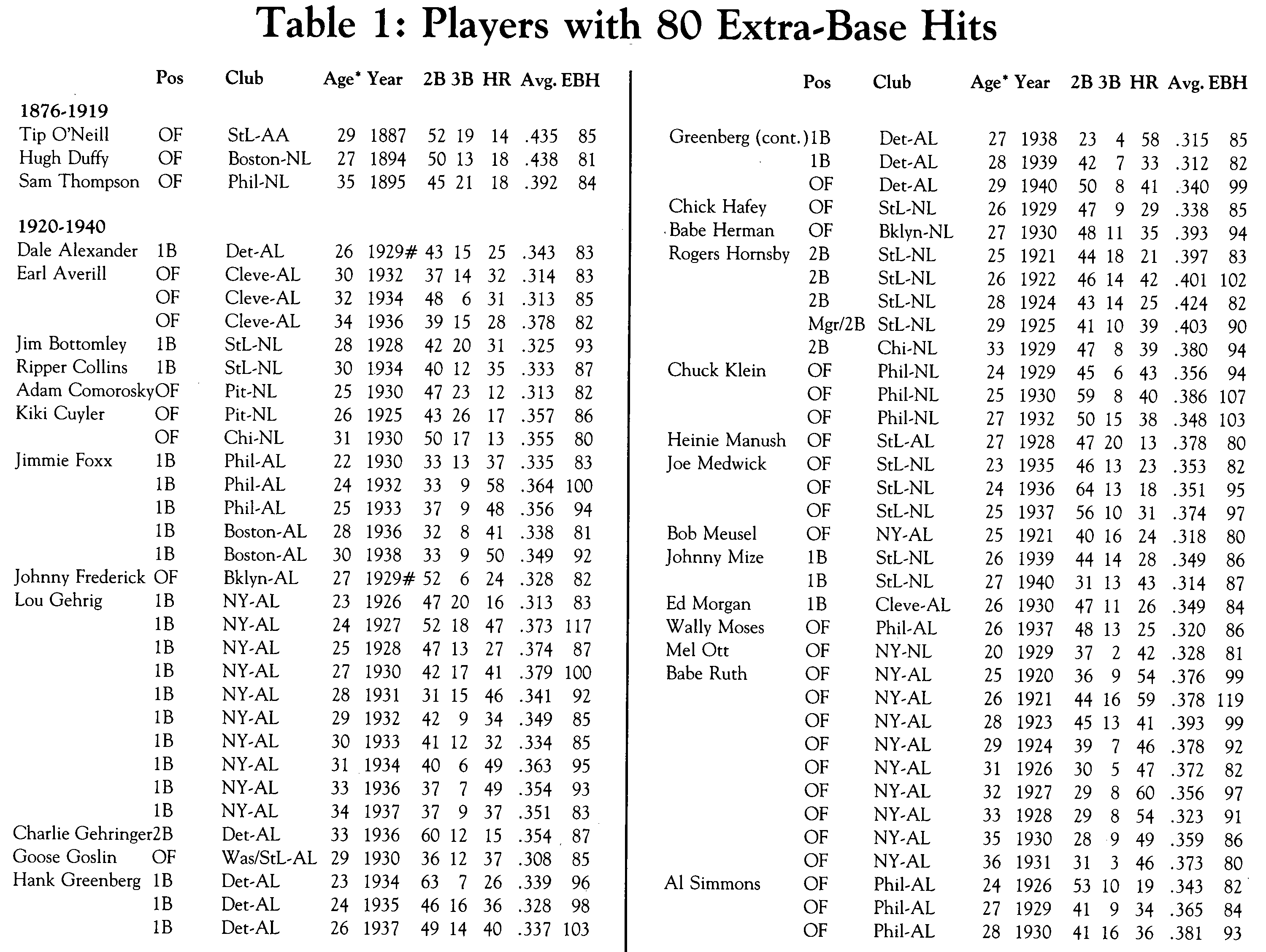 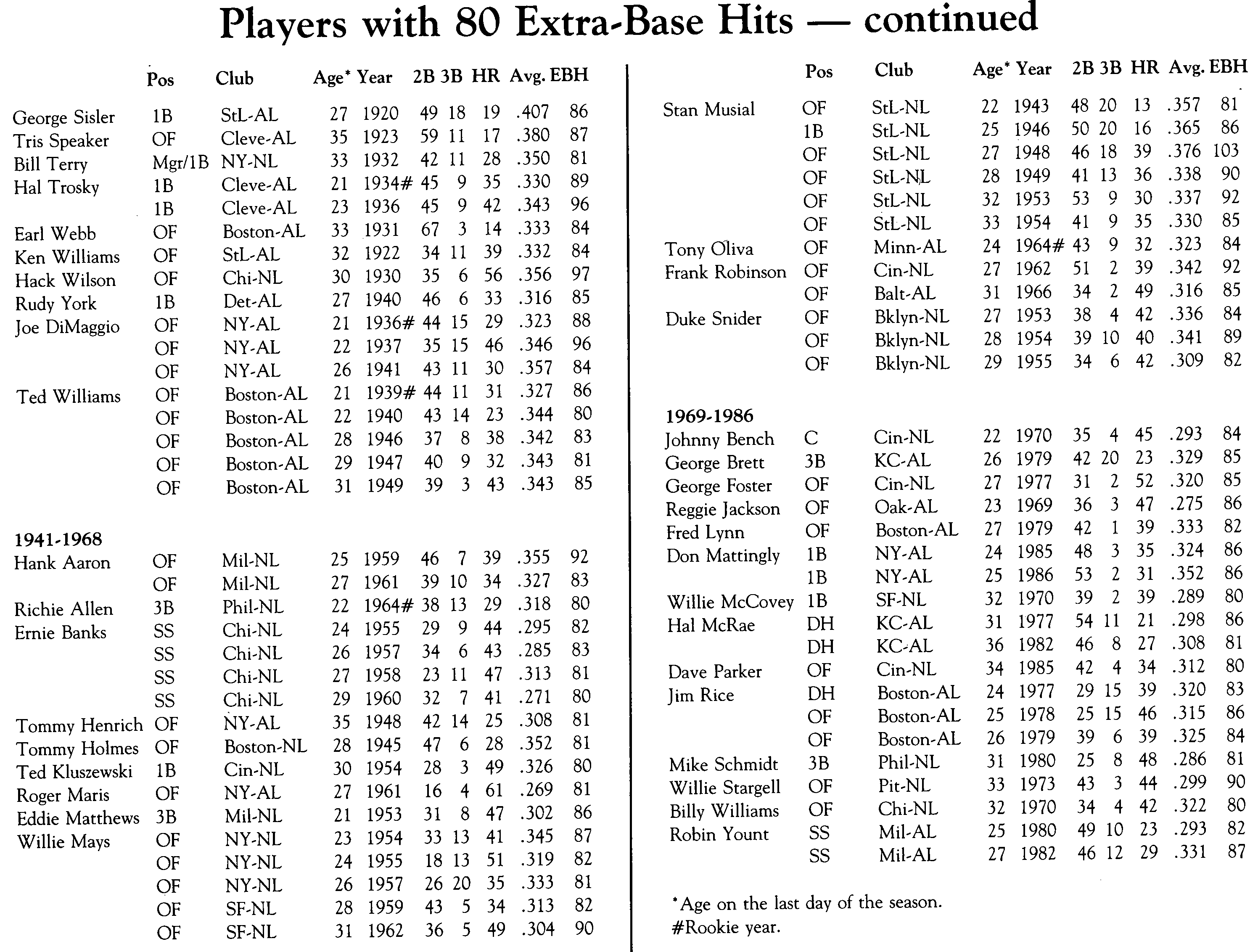 Only three players collected 80 EBH prior to 1920, and all analyses of characteristics involve only the 62 players and 130 accomplishments of 80-EBH seasons since 1920. In the lively ball era of 1920-1940, 80 EBH was achieved 78 times for an average of almost four per year. The banner year was 1930 with 11 players, six in the American League and five in the National League, reaching 80 EBH. In the 46 years since 1940 the feat has been achieved 52 times, approximately once a year. There was a slight peak in the 1950s (16 times in ten years), but the frequency otherwise was quite stable. Only once since 1941 have four players had 80-EBH seasons in the same year; that was in 1954. The 1969-1986 era was separated not so much to reflect a change in frequency, but rather to reflect the characteristics of those who have had 80 EBH under the current system of divisional play.

A total of 31 American Leaguers and 30 National Leaguers have had 80-EBH seasons, and only Frank Robinson has accomplished the feat in both leagues. Lefthanded hitters are more likely to have 80 EBH than righthanders, with 36 lefty sluggers turning the trick a total of 71 times versus 25 righthanders who did it a total of 58 times. Each of the three eras had more portsiders than righties reach 80 EBH. Only one switch-hitter has qualified – Rip Collins, who had 87 EBH in 1934.

Twenty-four players have had two or more 80-EBH seasons. Among them they accounted for 92 of the 130 such performances since 1920. In other words, approximately 71 percent were recorded by only 39 percent of the players who ever achieved the feat.  The 39 other seasons were once-in-a-lifetime accomplishments.

All playing positions are represented in this exclusive club, although 51 of the 62 who have done it have been outfielders or first basemen. Greenberg, Musial and Jim Rice had 80-EBH seasons at two different positions, and Bill Terry and Hornsby both did it as player-managers.

Age is a significant factor. Players in their mid- to late-20s predominate. Fifty-five percent of all 80-EBH seasons have been accomplished by players in the 24-28 age range. Only six percent of the 80-EBH seasons have been recorded by players over 33. The youngest to do it was Mel Ott, age 20 years and seven months at season’s end. The oldest was Ruth, who did it at 36 years and eight months in 1931. McRae came close, being 36 years and three months old when his excellent 1982 season ended. Seven rookies have qualified, the last being Richie Allen and Tony Oliva in 1964.

One other factor which has implications in predicting future 80-EBH sluggers is home park. With the possible exception of Yankee Stadium, no current park would seem to make this accomplishment easy. Sportsman’s Park in St. Lotus was home to 80-EBH seasons 22 times in 46 years, but it no longer exists. Yankee Stadium has seen 24 such seasons in 62 years of use, but 17 of those efforts were by Ruth and Gehrig, who presumably would have managed 80 EBH anywhere. (Ruth’s first two 80-EBH seasons occurred while the Yankees played at the Polo Grounds.) No other parks have had frequent 80-EBH seasons by home-team players. On the other hand, seven current parks in use for at least 20 years have never had a home player with an 80-EBH season. The Astrodome, Busch Stadium, Dodger Stadium, Fulton County Stadium, Shea Stadium and Anaheim Stadium have been in use for 2 1-25 years without such seasons. The real Death Valley is Comiskey Park, however. Not once in 67 years has a White Sox player attained 80 EBH. Don Mattingly should insist on a no-trade-to-the-White Sox clause in his contract.

With the realization that no 34-year-old righthanded second baseman for the White Sox will ever enjoy an 80-EBH season, are there certain numbers of doubles, triples or homers by sluggers that make 80 EBH more likely? Table 2 demonstrates the frequency with which certain levels were achieved by the complete sluggers. 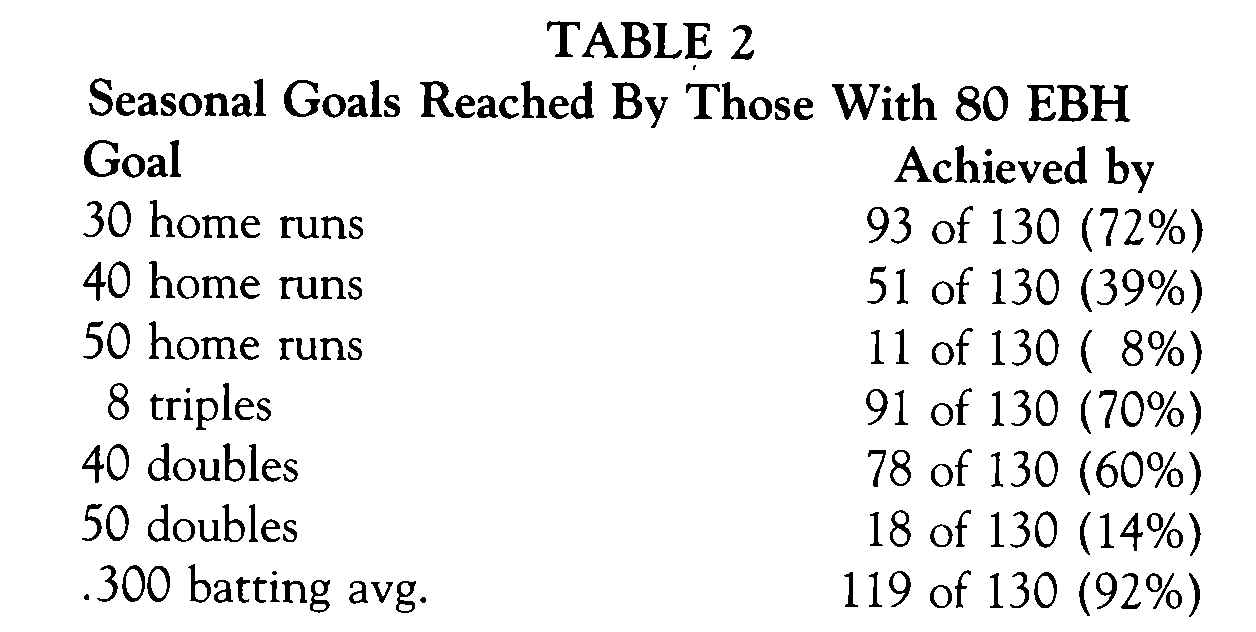 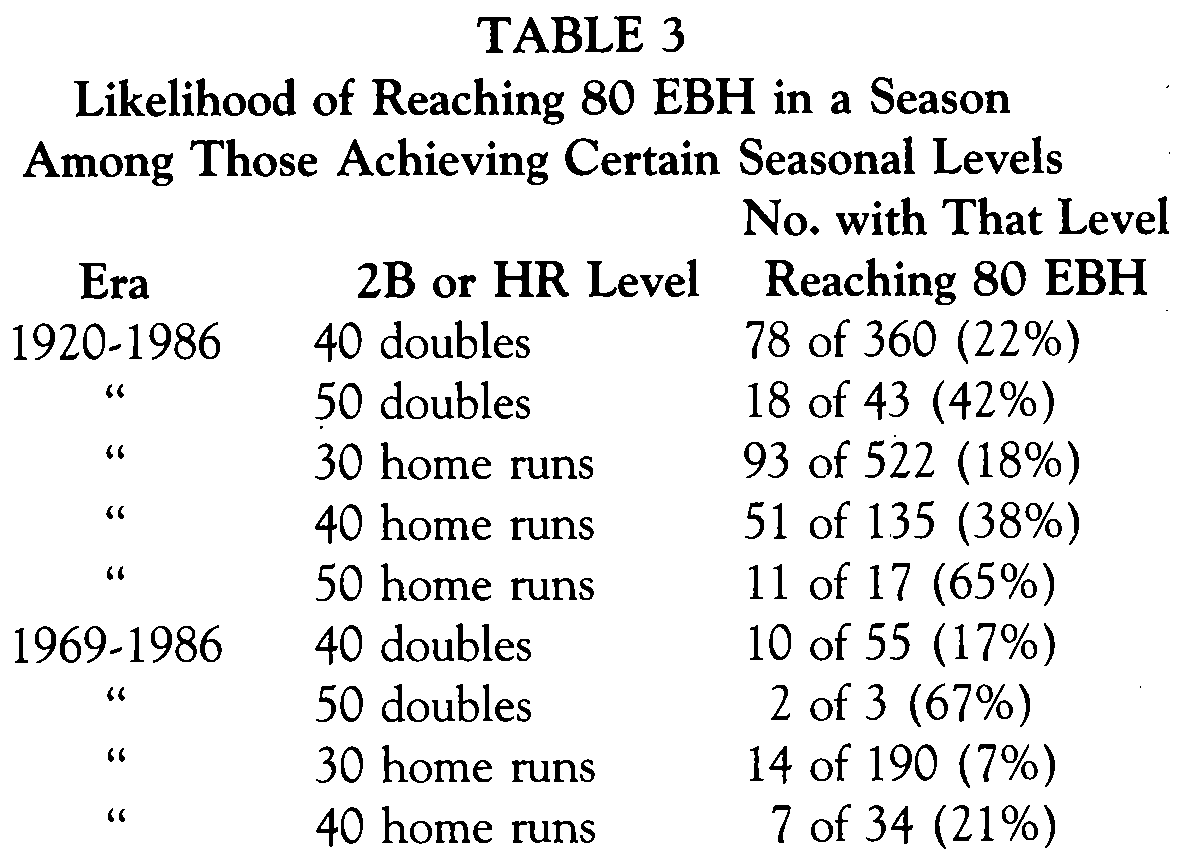 Betting the house on Wade Boggs even in a 50-double season is nonetheless not recommended. Since 1920, 38 percent of players with 40 homers have reached 80 EBH, although this is less predictive currently because only 21 percent have done so since 1969. The only achievement making a season of 80 EBH more than an even bet is 50 home runs. The surprising fact here is that 35 percent of players who walloped 50 homers did not manage 80 EBH.

Analyzing all of these characteristics produces descriptions of three types of players with the greatest potential for 80-EBH seasons in the future. The most likely (type 1) is the player who consistently strokes 30 doubles and 30 homers each year and who puts together an outstanding season of well over 30 in both categories while having a good batting average and a goodly number of triples. Mattingly had such seasons in both 1985 and 1986 and Dave Parker also had one in 1985. The second type is the young, high-average hitter with double figures in all three categories and an excellent year in doubles or homers but not both. George Brett’s 1979 season at age 26 typifies this pattern. The least likely (type 3) is the aging, lower-average player with at least 48 homers. Mike Schmidt had this kind of season in 1980. Most of the 80-EBH seasons fall into these three categories, and within these types lefthanders not playing in one of the seven “impossible” parks are more likely to accomplish this feat.

Based on these analyses, the following is a list in order of likelihood of ten players with a good chance at one 80-EBH season:

Conversely, there are many “power” hitters who are unlikely to have an 80-EBH season because they don’t hit enough doubles and would, therefore, have to reach the 50-homer plateau. The list includes Pedro Guerrero, Bob Homer, Eddie Murray, Darryl Strawberry and Dave Winfield, most of whom also play in “bad” parks. Type 1 double and home-run hitters who lack the speed or batting average to have the great year required include Steve Balboni, Kent Hrbek and Lance Parrish. Age makes 80 EBH unlikely for Tony Armas and Darrell Evans, or for Mike Schmidt to duplicate his 1980 season. And Greg Walker can forget that goal unless the White Sox trade him.

This discussion of complete sluggers and potential slugging stars is not meant to suggest 80 EBH as the only measure of a hitter’s power, but as one possible and somewhat exclusive measure. It does leave the question, however, of why the American League, with a potential sluggers lineup of Mattingly, Cal Ripken, Brett, Bell, Gibson, Barfield, Puckett and Rice, has consistently lost to the NL in the All-Star Game.