This article was written by Douglas Jordan

This article was published in Fall 2014 Baseball Research Journal 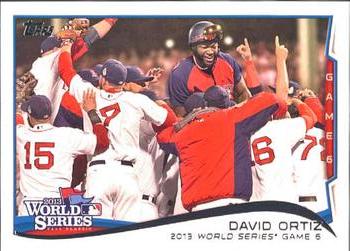 You’re ecstatic that your favorite team won the League Championship Series to get into the World Series, but your pitching ace performs poorly and the team loses Game One. How worried should you be?

There is a general perception among many baseball fans that losing the first game of a seven-game series is not a big setback, but is this fact or an unsubstantiated belief? Let’s say after the initial loss, they win the next two games to take a 2–1 lead in the series. Now how confident are you? Should you buy expensive champagne in anticipation of a World Series victory since you just won two in a row? Let’s hope you didn’t spend too much on the bubbly if you lived in St. Louis in October 2013, as that is exactly what happened to the Cardinals before the Red Sox won three in a row to take the World Series.

The purpose of this article is to examine the probabilities of winning the World Series for all possible game combinations. For example, what is the actual probability of winning if you fall behind 0–1 as St. Louis did, or 1–2 as Boston did? What if you’re ahead or behind two games to none?

How often have all the possible configurations of progressive won-loss combinations (“game situations”) occurred during the 105 seven-game World Series that have been played to date? The results are shown in Table 1.

The information in the last column of Table 1 is not directly related to the main point of this article but is included for informational purposes. Relatively straight-forward statistical analysis (see http://mste.illinois.edu/hill/ev/seriessol.html for details) gives the expected probabilities of possible game situations assuming each team has a 50 percent chance of winning each game. A couple of interesting points can be made by comparing the expected probabilities in column four to the actual percentages in column three. First, with three exceptions, the actual and expected probabilities are pretty close given the relatively small sample size.

This suggests that the teams that compete in the World Series are usually evenly matched. But there have been more sweeps (12.5 percent of 105 is about 13, so we would have expected to see 13 World Series end in sweeps rather than the 21 sweeps that have actually occurred), fewer 3–1 Series, and fewer six-game Series than theoretically should have occurred between evenly matched teams. These anomalous results are all related. The increased number of sweeps has resulted in fewer six-game Series. Why are there so many sweeps if the teams are evenly matched? The most likely explanation is psychological. Teams that fall behind 3–0 know their chances of winning are small and play the fourth game accordingly. This also accounts for the shortage of 3–1 Series. 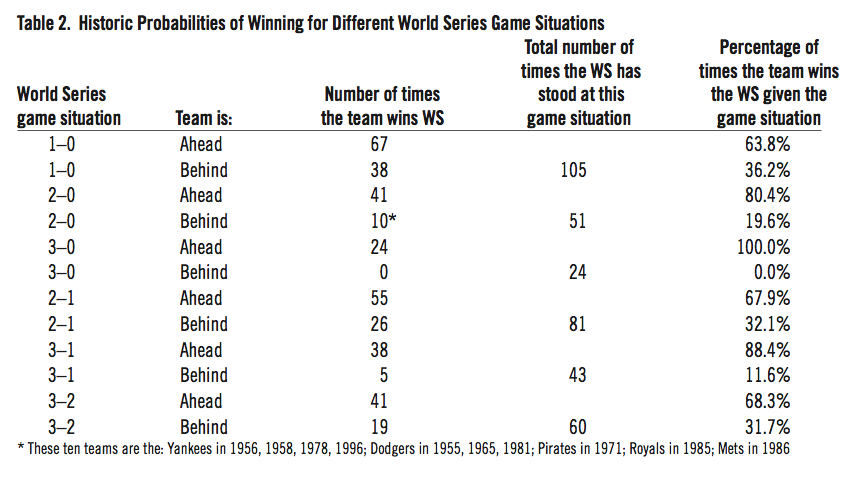 History suggests that teams down 1–3 also face long odds of winning. Only about one-in-nine teams facing that situation have come back to win. The five teams that did manage to come back from 1–3 are the Pirates (twice) in 1925 and 1979, the Yankees in 1958, the Tigers in 1968, and the Royals in 1985. Interestingly, the chances of winning when ahead or behind 3–2 are almost the same as the chances of winning when ahead or behind 2–1. Teams with a 3–2 lead win about two-thirds of the time and teams down 2–3 win about one-third of the time.

The argument is often made that the odd-numbered games in a seven-game series are the most important games. This is obviously correct if the series is tied at three games apiece but the truth of the argument is not self-evident in other game situations. For example, it is not obvious that Game One is more important than Game Two when the team that trails 0–1 will be down 0–2 if it loses the second game. Similarly, it can be argued that Game Four is critically important to the team that trails 1–2 in order to avoid falling behind 1–3.

The debate is difficult to resolve because of the subjective nature of the importance of each game in the Series. However, the data in Table 2 give us a way to quantify the change in the chances of a team winning the World Series depending on whether the team wins or loses the next game and the game situation. The results shown in Table 3 can shed some light on the importance of each game of the Series. 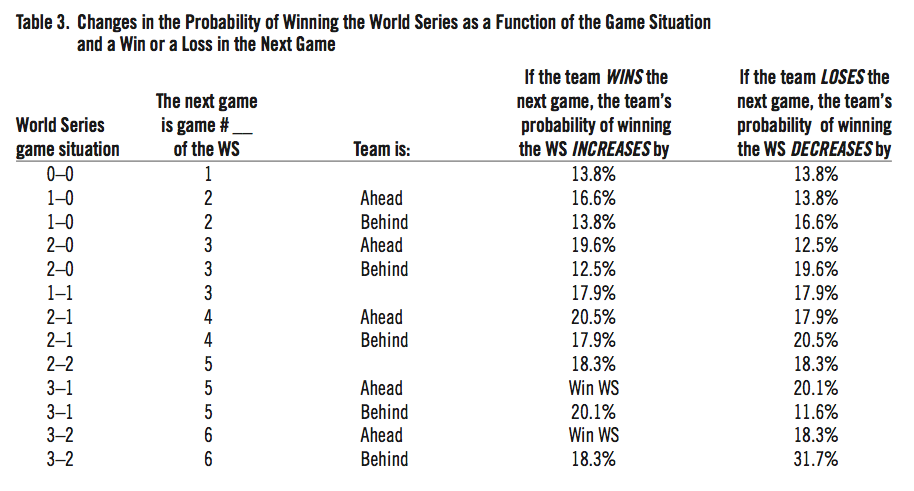 Table 3: Changes in the Probability of Winning the World Series as a Function of the Game Situation and a Win or a Loss in the Next Game
(Click image to enlarge)

Table 3 needs some explanation. First, each team is assumed to have a 50 percent chance of winning a tied Series. Second, all of the data in Table 2 are derived from the 50 percent assumption and the data shown in Table 2. Finally, the numbers shown in columns four and five are changes in probabilities rather than usual probabilities. For example, the first line of Table 3 shows that the team that wins Game One increases its probability of winning the World Series by 13.8 percent.

What if a team is behind 0–1? Table 2 shows that it has a 36.2 percent chance of winning the Series. However, if the team loses the second game to fall behind 0–2, Table 2 shows that its probability of winning the Series declines to 19.6 percent. The difference of 16.6 percent between 36.2 percent and 19.6 percent is shown on the third row and fifth column of Table 3.

This means that the team’s chances of winning the World Series have declined by 16.6 percent. All of the numbers shown in Table 3 were calculated similarly. Therefore, Table 3 quantifies the importance of each of the games in the Series based on the game situation and on how winning or losing a particular game affects the team’s overall chances of winning the World Series.

What does Table 3 say about how important each game is? The first thing to note is that the importance of a given game is a function of both the game situation and whether a team is ahead or behind in the Series so it’s difficult to make a blanket statement concerning evenor odd-numbered games. The data for Game Two, for example, show that the team that is ahead 1–0 increases its chances of winning by 16.6 percent with a victory, while the team that is behind 0–1 decreases its probability of winning by 16.6 percent with a loss. This 16.6 percent change in the probability of winning is greater than the 13.8 percent change from a win or loss in Game One which means that Game Two is more important than Game One.

These numbers suggest that Game Four is most important (a loss in that game decreases your chance of winning the most) followed closely in importance by Games Three and Five. The changes for the team that is behind 1–3 and 2–3 are included in Table 3 but are not germane to the argument because the team must win in order for the Series to continue.
In summary, the data in Table 3 suggest that the simple assertion that odd-numbered games are most important is too simplistic. Table 3 says that Game Four is the most important game of the Series, followed in importance by Games Three and Five. Also, Game Two is more important than Game One.

This article also examines the question of whether the odd-numbered games in the Series are more important than the even-numbered games. This broadly held notion is found to be too simplistic. As with many things when examined in detail, the answer depends on the situation. This analysis finds that Game Four is the most important game of the Series, followed in importance by Games Three and Five. In addition, Game Two is more important than Game One.

So don’t spend too much on the champagne if your team is ahead 2–1 in the World Series since you only have a two-thirds chance of winning. But if you win the very important Game Four, you can put the bubbly on ice. It’s a good bet you’ll get to open it.

DOUGLAS JORDAN is a business professor at Sonoma State University in Northern California. He is a relatively new but enthusiastic SABR member who looks forward to continuing to contribute to the literature on the best game in the world. A lifelong Mets fan who spent a decade in Texas, he finally learned to empathize with the suffering of Boston Red Sox fans in 1986 while agonizing over the 2011 World Series Games Six and Seven travails of the Texas Rangers.

I sincerely thank two anonymous peer reviewers for their comments and suggestions. Their input resulted in a much stronger paper.