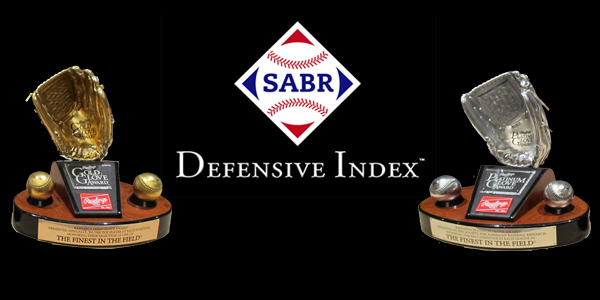 OCTOBER 20, 2022 — For the tenth consecutive season, the SABR Defensive Index (SDI) will be used to help select the winners of the Rawlings Gold Glove Award® and Rawlings Platinum Glove Award™, presented by SABR.

On Thursday, Rawlings announced the finalists for the 2022 Rawlings Gold Glove Award, honoring the best individual fielding performances at each position in the American League™ and National League™. The winners will be unveiled during a one-hour, special-edition ESPN Baseball Tonight broadcast at 5:00 p.m. ET on Tuesday, November 1. The show will air on-field prior to Game Four of the World Series from the National League host ballpark.

Following the show, voting will begin online for the Rawlings Platinum Glove Award, presented by SABR. A combination of the SABR Defensive Index and the national fan vote will determine who takes home the honor in each League. The final SABR Defensive Index rankings will be released at SABR.org/SDI on November 1, immediately following the ESPN broadcast. The Rawlings Platinum Glove Award winners will be unveiled at the Rawlings Gold Glove Award Ceremony at the Plaza Hotel in New York City on Friday, November 11.

This year also marks the first time utility players have been included in the list of Rawlings Gold Glove Award finalists. Rawlings announced the addition of the utility role to the list of Award recipients last month.

“The 2022 Rawlings Gold Glove Award finalists perfectly represent an unforgettable and exciting season of baseball marked by amazing displays of defense,” said Mike Thompson, chief marketing officer of Rawlings. “Rawlings congratulates all of the deserving finalists, and we can’t wait to name the next class of winners deemed the Finest in the Field.”

To determine the winners of the 18 defensive position Awards, each team’s manager and up to six coaches on his staff vote from a pool of qualified players in their League and cannot vote for players from their own team. To identify the utility Award winners, Rawlings collaborated with SABR to create a specialized defensive formula separate from the traditional selection process for the Rawlings Gold Glove Award position winners. Utilizing the SABR formula and additional defensive statistics, Rawlings will select one utility winner from each League.

To learn more about the SABR Defensive Index, visit SABR.org/SDI.