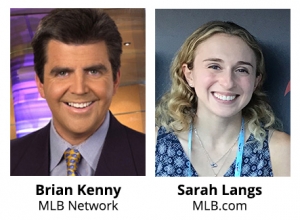 At the SABR Virtual Analytics Conference on Thursday, March 17, 2022, Brian Kenny of MLB Network and Sarah Langs of MLB.com opened the conference with a discussion on “The Year in Baseball Analytics.”

On evaluating and ranking players today:

On quantifiable measurements and the eye test

On if baseball analytics has reached “mature design”

On the importance of a player’s makeup