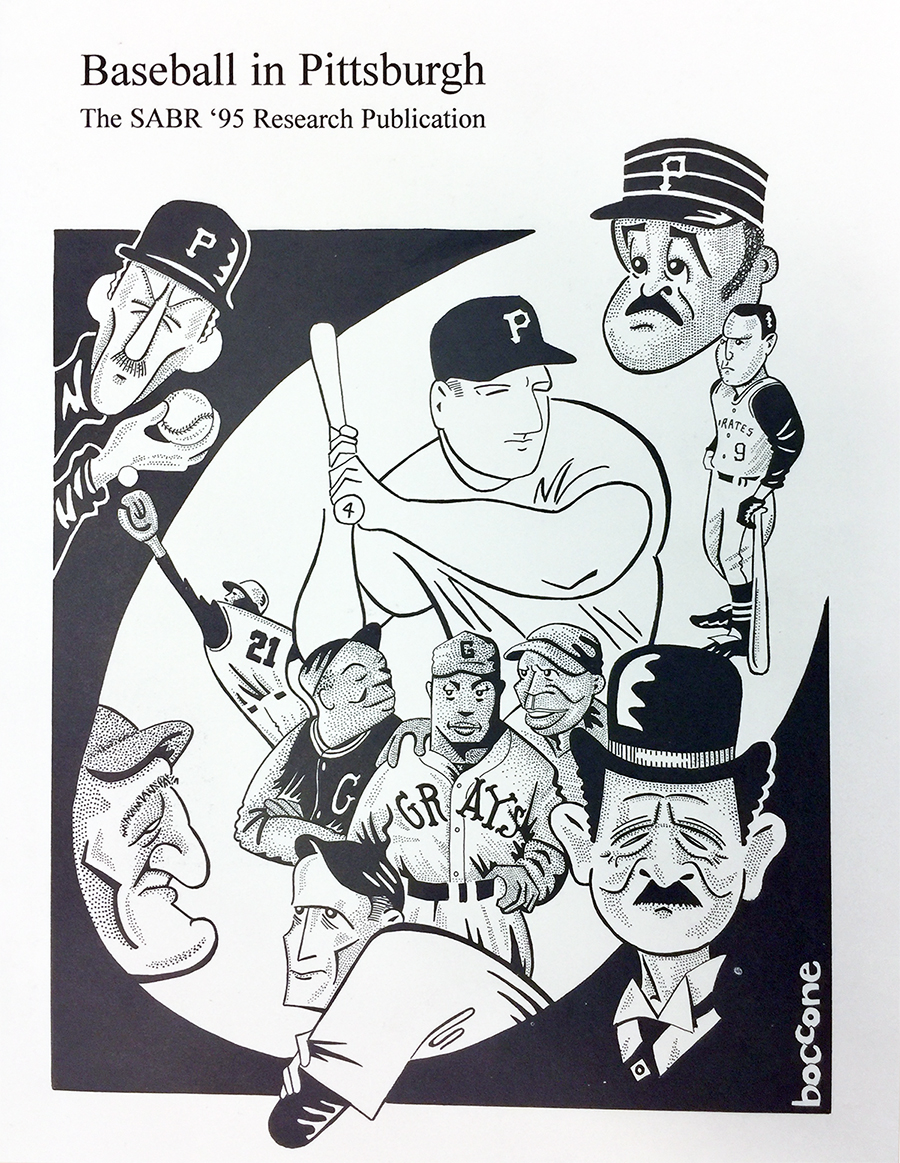 SABR began a year-long celebration of its silver anniversary in 1995, when the 25th annual national convention was held on June 15-18 at the Hyatt Regency hotel in Pittsburgh, Pennsylvania.

Next week, we’ll return to the Steel City again for SABR 48 at the Wyndham Grand hotel in downtown Pittsburgh.

Back in 1995, the hometown Pirates were also celebrating a memorable anniversary of their own, 25 years since the opening of Three Rivers Stadium, site of the team’s two most recent World Series championships in 1971 and 1979.

Chuck Tanner, manager of the 1979 champions, delivered the keynote address at the Saturday night banquet, which was emceed by former Pirates pitcher and broadcaster Nellie King. A strong showing of 451 SABR members and guests attended the 1995 convention, which opened with a casual afternoon of softball at Bill Mazeroski Field, near the site of old Forbes Field in the Oakland neighborhood.

Mazeroski, the 1960 World Series hero, and two of his teammates, Elroy Face and Bob Friend, joined the festivities for a panel discussion on their famous victory over the New York Yankees in that year’s fall classic. Another panel discussion focused on the 1971 champions, with Nellie Briles, Steve Blass, Milt May, and Bill Virdon on hand.

A tribute to black baseball in Pittsburgh, moderated by Rob Ruck, featured a showing of Ruck’s documentary film Kings on the Hill and a panel of former Negro Leaguers which included Willie Pope, Rev. Harold Tinker, Slick Surratt, Jimmie Dean, and Frank Bolden, a writer for the Pittsburgh Courier. A panel on the 1950s Pirates included Nellie King, Frank Thomas, and Ron Kline. 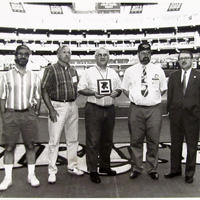 On Friday night, the convention gang went to Three Rivers Stadium to see Tony Gwynn and the San Diego Padres beat up on the Pirates. The pregame party included a “tailgate” picnic at the ballpark and an on-field ceremony featuring executive director Morris Eckhouse and president David Pietrusza. At the Awards Banquet (sponsored in part by Pizza Hut!), the Bob Davids Award went to SABR founding member Cliff Kachline. The ranks of the “Original 16” founders had dwindled earlier that spring with the passing of both Tom Shea and Bill Haber.

The Pittsburgh convention, which was capably organized by Ed Luteran and the local Forbes Field Chapter, also featured a bus tour of historical baseball sites in the city, including two old downtown ballpark locations and gravesites of several Pirates immortals.

The annual Trivia Contest also included a new twist: the very first individual competition, won by David Nemec, in addition to the traditional team contest, won by Al Blumkin, Scott Flatow, Dick Thompson, and Tom Zocco. “It was my favorite convention,” Nemec recalled. “Pittsburgh is a great city. … As was true when Ed Luteran ran the (trivia) contests, there were few 19th-century questions and none as I recall about the Pittsburgh American Association team. Ed was a fantastic emcee, however, and a great loss.” 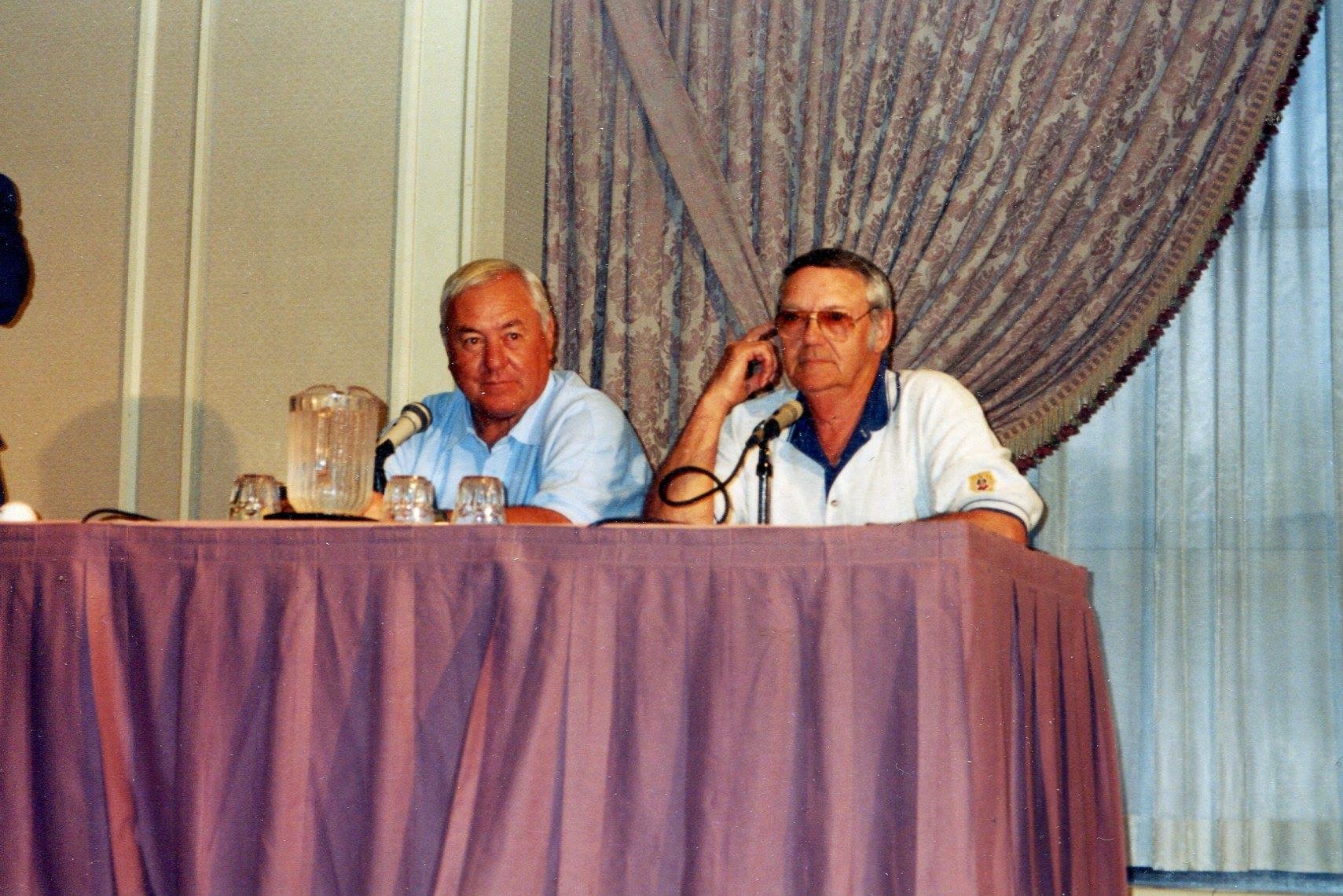 The convention journal, Baseball in Pittsburgh, edited by Paul Adomites and Dennis DeValeria, featured an interview with Pirates public address announcer Art McKennan, Pirates trainer Tony Bartirome’s memories of Roberto Clemente, a pictorial tribute of rare images from the Historical Society of Western Pennsylvania, and Jerry Malloy‘s study of the Pittsburgh Keystones and the 1887 Colored League.

Visit SABR.org/convention to learn more about the upcoming SABR 48 convention in Pittsburgh.