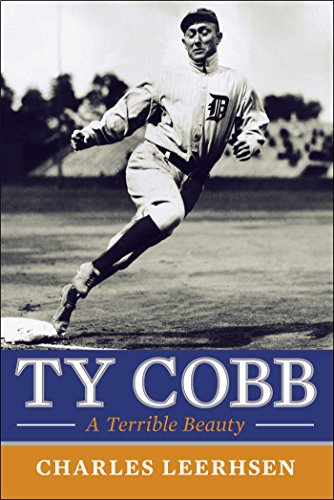 A fresh look at the Deadball Era’s greatest player and most controversial figure has earned the 2016 Larry Ritter Book Award.

Charles Leerhsen has been selected to receive the honor for Ty Cobb: A Terrible Beauty, published by Simon & Schuster. The Ritter Award is given by SABR’s Deadball Era Research Committee for the best book related to the Deadball Era published in the previous year.

Leerhsen, a veteran magazine and book author, challenges conventional wisdom regarding the Georgia Peach, baseball’s all-time batting average leader and a member of the first group inducted into the Hall of Fame. For decades, Cobb has been portrayed as crusty, combative, bigoted, hostile, hateful, malevolent, malicious, and racist. And while he may, at times, have exhibited all of those characteristics, Cobb’s personality was a complicated one. Leerhsen peels back the many layers of his subject’s strident persona and examines the events that shaped Cobb’s highly competitive and combative character. These include the tragic death of young Ty’s father at the hand of his mother and incessant hazing by Detroit teammates during his early years with the Tigers. Leerhsen suspects that those events caused Cobb to suffer a nervous breakdown during his second season, and influenced his behavior through the remainder of his career.

The author concedes the flaws in the Peach’s personality, but also endeavors to provide context for Cobb’s conflicts on the field and off. Particularly careful scrutiny is applied to Cobb’s conflicts with persons reportedly of color (some of whom were actually white) and the effect his upbringing in the post-Reconstruction South had on his racial attitudes. Leerhsen also provides sympathetic treatment of the Peach’s often- overlooked good works and humanity, especially his willingness to assist and aid old teammates and foes in their sunset years. In all, Ty Cobb: A Terrible Beauty provides a complete and well-rounded portrait of an outstanding ballplayer and a complex man.

The Larry Ritter Book Award honors Lawrence S. Ritter (1922-2004), whose 1966 book The Glory of Their Times: The Story of the Early Days of Baseball Told by the Men Who Played It established the standard for baseball oral history. The award is granted by SABR’s Deadball Era Committee to the author of the best book in the previous year on baseball between 1900 and 1919. The winner must demonstrate original research or analysis, a fresh perspective, compelling thesis, impressive insight, accuracy, and clear, graceful prose. The award was first presented by SABR in 2002.

The other finalists for the 2016 award were:

The award will be presented during the Deadball Era Committee’s meeting at the SABR 46 convention, July 27-31, 2016, in Miami.