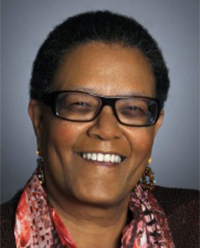 Claire Smith, a pioneering baseball beat writer and columnist, was honored on Saturday, September 11, 2021, with the Dorothy Seymour Mills Lifetime Achievement Award during the SABR/IWBC Women in Baseball Conference.

Smith became the first woman to win the prestigious BBWAA Career Excellence Award, presented annually by the Baseball Writers’ Association of America, in 2017.  She got her start covering sports in the 1970s while she was a student at Temple University. She later covered the New York Yankees for the Hartford Courant from 1983 to 1987, before moving on to the New York Times and the Philadelphia Inquirer. She worked as a coordinating editor for ESPN from 2007 to 2020. In 2018 A League of Her Own, a nine-minute documentary telling the story of Smith’s career, was one of 19 films screened at the Baseball Hall of Fame’s annual Film Festival.

In addition to Smith, the other finalists for the 2021 award were Janet Marie Smith, Los Angeles Dodgers’ Executive Vice President of Planning and Development and acclaimed baseball stadium architect; Justine Siegal, Baseball For All founder and longtime baseball player, coach, and advocate; and Toni Stone, one of only three women to play in the Negro Leagues.