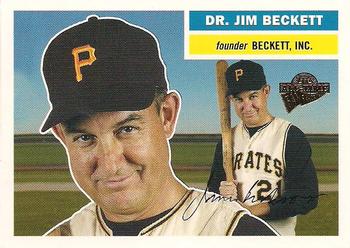 Dr. James Beckett was selected as the winner of the 2022 Jefferson Burdick Award, which honors individuals who have made significant contributions to the baseball card hobby, by SABR’s Baseball Cards Research Committee.

For an entire generation of collectors beginning in 1984, cracking open the latest Beckett Monthly was a ritual as exciting if not more than ripping actual packs of cards. Which new players made the Hot List? How much did the year’s most expensive rookie cards go up? Instant access to the latest prices, which almost always went up, rarely down, surely had its drawbacks. What collector of a certain age doesn’t regret trading away a prized Sandy Koufax or Henry Aaron for high numbers Todd Zeile or Donruss Eric Davis rookie?

After nearly four decades as the CEO of Beckett Inc., Dr. James Beckett built what can rightly be called a multisport hobby empire, one that today includes publications, grading services, livestreams, a marketplace, and a large, vibrant collecting community.

Click here to read more about Beckett’s career and legacy at the SABR Baseball Cards Blog.