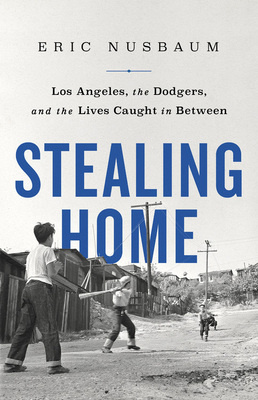 Stealing Home: Los Angeles, the Dodgers, and the Lives Caught in Between, written by Eric Nusbaum and published by PublicAffairs, is the winner of the 2021 Dr. Harold and Dorothy Seymour Medal, which honors the best book of baseball history or biography published during the preceding calendar year.

Nusbaum will receive his award during the 28th annual NINE Spring Training Conference at 8:00 p.m. EDT / 5:00 p.m. PDT on Saturday, March 20, 2021. The NINE Conference will be held virtually over three weekends in March. To register for the NINE conference, visit nineconference.com.

In Stealing Home: Los Angeles, the Dodgers, and the Lives Caught in Between, Eric Nusbaum tells the story of a community, a city, and a baseball team. The arrival of the Dodgers from New York brought major league baseball to Southern California, but it was the building of Dodger Stadium which changed the lives of the people who lived in three established Mexican American communities in the hills of Chavez Ravine. Nusbaum weaves together the devastating consequences of the city’s politics in the 1950s and 1960s, showing the intersections of the lives of local families, the activism of Fred Wilkinson and his work on a public housing project, the early career of Roz Wyman and the politics of the Los Angeles City Council, and the building of a new home for a major league team. Stealing Home is a good example of how baseball history can inform us not only about the sport, but the broader society.

Nusbaum, a SABR member since 2019, writes a weekly subscription newsletter called Sports Stories and is a former editor at VICE Sports. His work has also appeared in Sports Illustrated, ESPN the Magazine, The Daily Beast, Deadspin, and the Best American Sports Writing anthology. Born and raised in Los Angeles, he has also lived and worked in Mexico City, New York, and the Seattle area, where he now lives with his family.

The other finalists for the 2021 Seymour Medal were: